Lebanese designers don’t have it easy. Abroad they are seen as coming from the third world – and at best are lumped into the “Arab designers” category of the ornate oriental sort, limited to calligraphy and arabesque motifs. Meanwhile, the local public often doesn’t appreciate Lebanese design and craftsmanship, and would rather pay for foreign brands they consider more prestigious.

The struggle is not only real – it’s hard to get out of. Local artisans working with designers struggle financially and tend to charge more for non-commercial projects where quantities are small. This of course hikes up prices and discourages Lebanese clients who hardly believe in local products anyway.

It is in this space between a rock and hard place that Lebanese designers must work. As a result many move to greener pastures where their craft is appreciated. Some go commercial. Others remain in Lebanon, and for them design is more than creating beautiful objects, or even functional ones – for them design is a statement.

Karen Chekerdjian is part of the generation of Lebanese designers who, after the Lebanese Civil War, began building the foundation for today’s cultural scene. She teeters on the border between art and design, creating furniture and everyday objects using traditional craftsmanship in new ways. It hasn’t been an easy path but it’s one she firmly believes in and struggles for daily. Many local artists are recognized locally only after they’ve made it abroad, and she’s increasingly getting the overseas recognition she deserves. 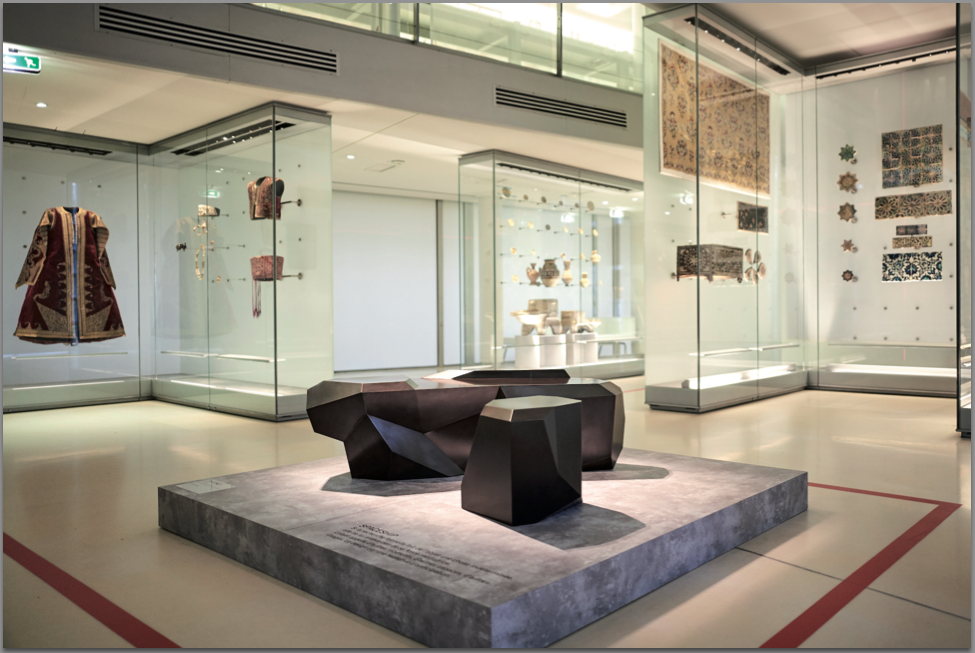 Though she exhibited at Art Basel and Design Miami in 2015 and has participated in Milan Design Week for 19 years, this summer Chekerdjian was contacted by the prestigious Institut du Monde Arabe (IMA) in Paris and given carte blanche to display her work throughout the four-floor museum as she pleases. Her exhibition, titled “Respiration” opened on May 30 and runs until August 28.

It’s flattering, she admits. While IMA has had photography and art exhibitions in the past, she is the first designer to exhibit, and the first exhibitor allowed to use parts of the museum outside the conventional spaces designated for temporary shows. “I hope it opens doors [for me] in Europe,” she says, but adds that it’s an opportunity for all Lebanese and regional designers: “It’s not only about me, it’s about the image of Lebanon. Usually when they show design of the Arab world in Europe it’s much more traditional and orientalist, which doesn’t really appeal to the European market. This is a chance for me to show that Middle Eastern design can be different.” 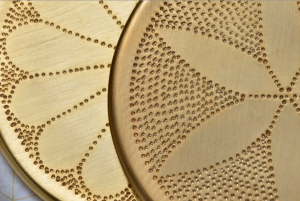 Chekerdjian’s designs are indeed different – bold statement pieces with a touch of the unconventional and unexpected. “My objects will mark your space. I don’t do it on purpose but when I design it’s how I conceive things,” she says. Her designs range from sculpture-like pieces that command a room, to simple napkins embroidered with drawing of traditional Lebanese doors; stackable totems in various colors that serve as tables and stools, to multipurpose archetypal tools like hammers and flints. Much of her work is simple and minimalist – objects distilled to their purest form. She experiments with materials and finishes and sometimes makes items from reclaimed bits and pieces. She believes objects should have a function in addition to being beautiful, but that function is up to each individual to decide. Clients often ask whether something is a chair or a table but Chekerdjian says it’s a personal perception.

Beirut serves as a muse for her work. “I am completely affected by where I am. My home is an old Lebanese house, my workshop is here, I go to local craftsmen in the industrial zone, I run on the corniche. Beirut is this mix of people on the street and sophistication and contradictions. We have these extremes that mix together and I’m the product of that,” she says. 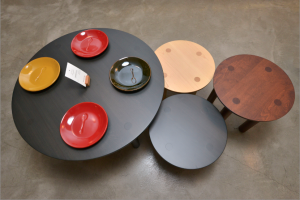 The first room at the exhibition shows a short film on four large screens about the Beirut-based designer, contextualizing the exhibition and enlightening those who might not know the country beyond stereotypes of the Middle East. “I want people to know me before knowing my objects. They’ll understand them more,” she says. Visitors can actually sit on her seating designs while watching the film. “They might damage them, but I’m taking the risk. For me it’s important to let them really feel the furniture,” she says.

In fact she says designers have a profound effect on daily life. “I decide how I want people to live with my things. When I design a plate, cup or table I can influence your life – maybe in a tiny way – but it really makes a difference,” she says. Not only that, but according to Chekerdjian design leaves a trace of the daily life of a society: “We die and leave our objects and architecture behind. Thousands of years later only these artifacts are found and in museums you see mainly objects from the daily life of our ancestors.” This is why she worked with an anthropologist to set up the IMA exhibition. Though she says it was a challenge to transform the tricky space, she wanted to create a dialogue with the permanent items of the museum. 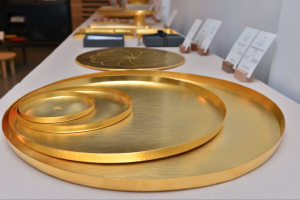 Chekerdjian is meticulous about the quality of her objects and extremely selective and demanding of her artisans, who don’t always agree with her vision. When she first began working with one craftsman on a metal tray, he didn’t understand why she wanted to decorate it only with straight lines. After engraving straight lines by hand he admitted it was much more difficult than the usual calligraphy patterns and was persuaded to use his skills on her designs. Sadly, craftsmen are few and slowly disappearing (Chekerdjian has lost one metalwork craftsman and a carpenter over the years), while the younger generation isn’t always willing to work with her because it’s not lucrative. “They make much more money making doors,” she quips.

On the other hand customers are not willing to shell out sometimes as much as four times more for handcrafted work. The perception that Lebanese are not as good as foreign designers is frustrating and makes the struggle that much more difficult. Other countries in the region appreciate what comes out of Lebanon, she explains, but “in Lebanon we don’t love ourselves. It’s very strange.”

She admits it’s challenging to sell to the Lebanese public. “It’s getting better but it takes time. It’s been 19 years now,” she says, adding that if her work didn’t come from the heart she would have stopped by now. She’s also driven by the challenge of it.

Designers like Chekerdjian struggle with the usual Lebanese challenges – a lack of institutionalization and infrastructure, and little recognition. But despite the obstacles, design and culture in general are undoubtedly growing here. “Lebanon is not only dirt and violence and bad urbanism. We also have good architects, artists, designers,” she says.

To Chekerdjian design is a social and political act. After studying and working at internationally reputable company Edra in Milan she returned to her homeland. “I could have easily stayed in Milan but I came back. I did things the hard way,” she says. With her faith in Lebanon she maintains that designers and others in the cultural sphere who have chosen to stay here can make statements: “we are not only designers; we can make a difference with our design.”

She says, “I’m not interested in politics but design is my way of being political. This is my fight – I can’t fight differently. My fight is through my work and just by being here, that alone is a statement.”

The rocky road from inventor to businessman