Home Special ReportDesign You are what you wear: Brahms Chouity

You are what you wear: Brahms Chouity 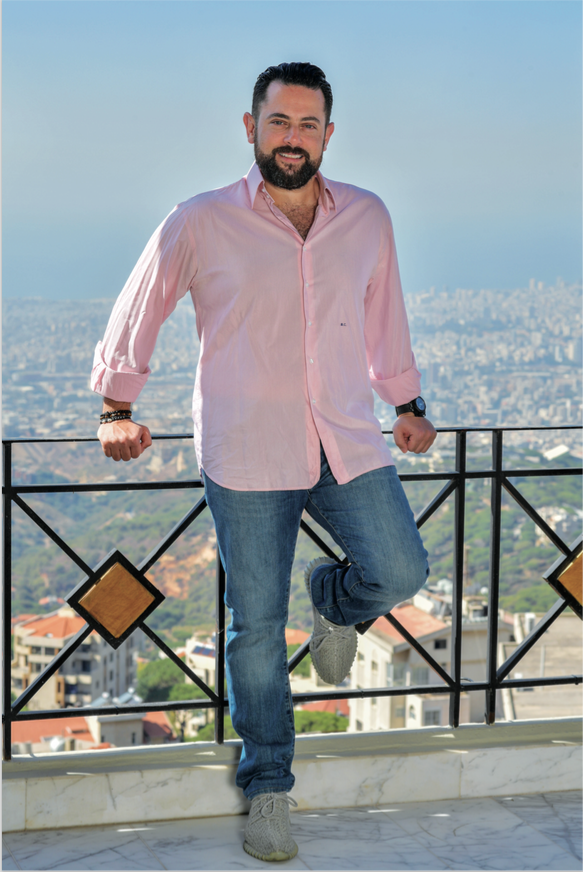 He’s only 38, but serial entrepreneur Brahms Chouity is currently on his 20th startup – Shayyaka. His wife Tina is his partner in all ventures, and they have two children who are 5 years and 6 months old. The two admit they often argue about work, but they clearly have a winning formula.

How did you meet Tina? We studied hospitality at different universities in Switzerland and met at an internship in Lebanon. Tina was peeling vegetables in the kitchen of the restaurant Sydney’s when I first met her. We’ve been working together since we graduated.

Which startup was most profitable? My first, which I still have, Trait D’Union, a hospitality investment company servicing the Gulf. I was definitely in the right place at the right time but I was fresh out of university, super motivated and worked 18 hours a day.

Which of your startups is your favorite? Adhaddak, a gaming website. I’ve always been a gamer and the company was born out of a fight Tina and I had. She was pregnant so we took a year off to fix the house. I played a lot of PlayStation and eventually she said, ‘either turn this into a business or I’m taking it away’. I thought, ‘brilliant!’ I made a lot of mistakes because I didn’t know how to monetize it but I don’t regret it at all – there are 3 million users and it really put me on the map in the tech world. Monetarily it was a flop.

What’s your latest venture? Shayyaka. For 10 years we were the regional franchisers of Quintessentially, an international concierge service with an annual $50,000 subscription fee. During that time we got a lot of fashion requests, so we decided to stop [working with] Quintessentially and in 2015 we opened an online concierge that specializes in fashion.

What was the weirdest request you ever got? I can only tell you about the legal ones! There’s something we messed up once. A male client requested a necklace and one of our sales assistants called his wife afterwards to ask if she liked it, to which she responded, ‘what necklace?’ The assistant had assumed it was for his wife, but it wasn’t.

How does Shayyaka work? It’s a website, there’s no membership fee and we have sourcers around the world who help us get what we need. One of the strong benefits of Shayyaka is that we are well connected, because big brands often have restricted access and products.

Watch, Audemar Piguet Royal Oak Survivor. I love watches, I have about 80. Not all of them are valuable but my favorite brand is Audemar Piguet because it’s not flashy. My second favorite is probably Panerai. I like the sporty styles. I’ve had this watch for eight years; I wanted to splurge after one of my first big paychecks – there were no babies then!

What do you usually wear? My life is multifaceted. If I’m going to a meeting for a $10 million project I wear my Brioni suit because they expect that, especially in Lebanon. But if I go to a tech forum I’m casual. My favorite look is simple: jeans and a t-shirt or a shirt.

Jeans, Mavi. I hate when jeans get crisp. This is the only brand I’ve found that stays soft.

Shirt, All my shirts are tailored by an old man named George with a shop in Ras Beirut.