When it comes to maximizing money, the rich have access to many more resources than anyone else, not to mention the disposable cash to play with in the first place. That doesn’t mean that they are financially literate by birth but they usually grow up in a very favorable family environment for acquiring financial literacy, can afford to and appreciate financial education and, if they are not acquiring the requisite knowledge and skills, depend on eager wealth advisors and full-time asset managers.

In other population groups, things are not only very different from the wealthy but also look different for the poor and for the middle class. For the poor, cognition and energy are consumed by accessing basic needs in exhausting mental efforts that according to international studies leave them with almost no spaces for higher-level thinking and long-term planning. International best practices for aid organizations that hand out donations therefore include also teaching recipients basic budgeting skills.

If anything can help this tier it is quality education, which can empower young generations to break out of poverty. “The cycle of poverty is very correlated with education,” explains Salyne el-Samarany, CEO of Teach For Lebanon (TFL), a local educational organization that is part of a global network. Instead of taking the public primary and secondary education system in Lebanon as granted and focusing their concerns only on pressing needs of securing their access to electricity and water, the Lebanese should also be demanding high-quality free education, she says, arguing that this would be an incredible tool for the whole country, especially the poor. She claims that TFL has holistic programs which empower underprivileged school kids with more than just academic knowledge, aiming to produce well-rounded citizens with a better chance of succeeding in life.

When it comes to the middle class, the challenges are different. Social group pressures may lead them to live beyond their means, irresponsible advertisers and loan sharks target them for the little they have, and lack of sound financial education may not allow them to find ways out of destructive consumption cycles that they find themselves locked in.  That’s why improvements in financial literacy, beginning with awareness building across the population, are so vital, argues Nina Abi Fadel, founder of Eventa, the organization behind the Moneysmart financial literacy workshops. 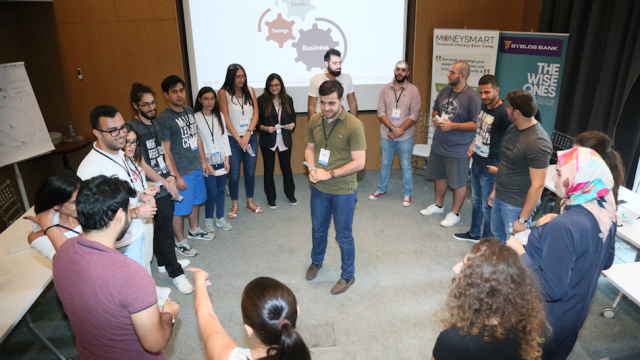 In her perception, the most important first step is changing mindsets, claiming that Moneysmart workshops help people understand and change their habits, encouraging saving, even if only a small amount. “The life we live in Lebanon and retail banking allow you to spend more than you earn, so the first thing we are trying to do is change that,” she says. Launched in Lebanon last year with four pilot workshops, a first wave of Moneysmart “boot camps” are free to the public and sponsored by Bank Byblos. According to Abi Fadel, the first few workshops were focused on youth, because this group can be advanced in financial literacy with great effectiveness. Youth are making their first earnings or might soon start salaried careers but if they have any questionable money-related habits, such as overspending or tendency to borrow in disregard of ability to plan paying down loans, these are not yet ingrained in their behaviors. Expanding from these workshops for youth, Moneysmart is moving into boot camps that are tailored for women, young families, and businesses on fee basis.

Offered with Arab audiences in mind, the organization’s workshops are targeting a wider age-range than the initial youth workshops, but Abi Fadel says that financial skills should ideally be taught as early as possible. “If you teach children from seven to 14, they go home and teach their siblings and parents. It’s a powerful age,” she explains but laments that it is difficult to find sponsors for young people. Her solution was to devise a model called the Champions Program, under which Eventa enrols graduates of the youth workshops as volunteers to teach the skills they’ve learned to school kids all over Lebanon.

Another initiative aimed at teaching kids in Lebanon about money is the local branch of Global Money Week (GMW). The GMW has been growing here since 2014, with more and more organizations and banks engaging a growing number of children and youth (2,811 in 2018) with a range of activities and events, such as workshops, discussions, and competitions.

Teach for Lebanon piloted financial literacy programs for youngsters this year, starting in two schools, Sahaguian-Levon Meguerditchian School and the Father Afif Osseiran Foundation. They are currently trying to identify partners to potentially implement these initiatives on a wider scale. They’ve also invited SGBL to talk to students about the basics of banking and money, regularly counsel students on careers, teach them entrepreneurship skills, and take them to workplaces.

Lebanon’s education ministry should integrate these skills into the school curriculum, Samrany advocates. “Currently in Lebanon, the formal education system is quite outdated. There are a lot of new skills kids need to learn in order to become effective citizens,” she says, adding that there is currently talk of curriculum reform. According to Abi Fadel, participants in workshops organized by her organization and respondents to other surveys conducted by Moneysmart also favor starting with financial literacy training at a young age. “Our participants agree too that this should have been done much earlier so they can now focus on more important development [goals],” says Abi Fadel.

Once people have learned enough about financial planning and managed to save some money, there are various things they can do with it. “When you have a lot of money, you go to a private bank and have an advisor, but when you have a little, you’re on your own,” Abi Fadel says. One of Moneysmart’s newest workshops is a shorter, more specialized lesson for those that want to invest small amounts of money.

She recounts how one alumnus stopped smoking arguileh for one year, saved $2000, and invested that in a local shop, from which now earns $250 a month from that investment. Particular types of small investments can work for specific individuals, and can involve maximizing family businesses and utilizing inherited land.

The fate of Syrian refugees in Lebanon