Local banking for the wealthy on the rise

International reports suggest that the Middle East is currently the world’s second fastest growing region in private wealth, trailing only Asia. According to a Global Wealth 2017 report published in June by Boston Consulting Group (BCG), an international management consulting firm, the private wealth segment picked up momentum globally in 2016, but with visible regional variations. This means that tailwinds are gathering for private bankers in Beirut. As Toufic Awad, general manager of Audi Private Bank, tells Executive, “This region has a very robust growing pool that promotes the need for wealth management and wealth management services.”

In other words, while some show optimism about the global economy — last month, European Central Bank (ECB) head Mario Draghi opened his Jackson Hole speech to his central banking peers by saying “the global recovery is firming up” — the gains in global private wealth, by comparison, appear to be inordinately healthy, and more so in the Middle East and Africa than in other world regions.

The October 2021 Art Special Report will seek to assess the state of the Lebanese art scene in the midst of the financial, social, medical, and political crises.

Stories will focus on the different pillars of the cultural community - artists, critics, museums, collectors, and the public – to frame their particular voices in defining and preserving Lebanon’s cultural history and its future:

While the apparent faster growth of private wealth, when compared to overall improvements in the global economy, might seem disturbing to equality advocates in Lebanon, just as anywhere, private bankers will not be complaining. Even if increased accumulation of wealth from domestic business activities in the past six or seven years is questionable (see interview with FFA Private Bank Chairman Jean Riachi on page 34), and even if the economy in Lebanon were to remain locked in the state of “timid improvement” observed in the first half of 2017, these numbers imply that private bankers in this country could still book a growing share of handouts from the goddess Fortuna.

This is a benefit of the diaspora, says Charles Salem, global head of private banking and wealth management at Banque Libano-Francaise (BLF). Citing regional developments in 2009 and 2010 (the years directly after the great recession) and then in 2015, his view is that strong oil prices — as well as the issuance of new equities and infrastructure investment projects in the Gulf and MENA markets — all created new wealth there. This in turn, had an impact on wealth creation in Lebanon.

“The diaspora is active in all these countries and contributed to the global wealth creation in the GCC, MENA, and some African countries. Wealth thus also flowed to Lebanon, but the local infrastructure was not there to manage all this money. Today, the banking industry in Lebanon, and I think this is also due to international regulations, is putting in place all the teams and expertise to manage this money. I think that we can have world class services here — as one can find traditionally in Switzerland, Europe, and the US in private banking — that can be delivered locally today. This is what we are doing here in BLF [Banque Libano-Francaise],” explains Salem, who joined the Lebanese bank earlier this year in continuation of an international career in private banking.

Audi Private Bank’s Awad has a similar perspective. He says, “The Lebanese diaspora is very active in regions like Africa and South America and are still looking to diversify their wealth away from their domestic markets. We have active desks for those markets, for Latin America, Africa, and also the Gulf and the GCC. Most of our Lebanese expat clients are trying to repatriate money from their country of business to Lebanon, because they are not very secured by their political and security environment [in their countries of residence]. Therefore, we are still seeing flows to Lebanese private banks and to Audi Private Bank.”

As Awad acknowledges, the situation, from the private banking perspective, is nonetheless not entirely a bed of roses. “The wealth management industry, as we all know, is in a transition mode in order to accommodate all the increasing regulatory requirements and related costs,” he tells Executive, explaining that private banks have to undertake heavy investments into compliance, management information systems, and other information technology upgrades. “This is why we believe market share is important. Small players in this market will have a difficult time coping with increased requirements,” he adds.

Private banking may be situated in a sweet spot, when seen from the current macro environment and outlook for wealth, but when seen from a client relations, regulatory, competitive, and technical perspective, players in this industry have no laurels to rest on. In the years of and after the great recession, from 2007 to about 2012, client confidence did not look good. In Europe and the United States, the recent past was filled with an enforced departure from bankers’ notorious secrecy and willful assistance in hiding client assets from tax collectors.

Further, while today’s global economic conditions are regarded as calm and upbeat in comparison to 2016, as illustrated by the Draghi speech, no central bankers’ symposium today is complete without an ominous warning that memories of the 2007 recession are fading.  “We can never be sure that new crises will not occur,” Fed Chair Janet Yellen cautioned in her — politically loaded — Jackson Hole remarks. Unsaid note to private bankers and wealth managers: never expect an easy time. Additionally, new technology — specifically artificial intelligence — is a fourth element that is emerging as both capable and likely to disturb the peace of private banking in the near future.

The primary threat from cyberspace, in the case of private banking, are not viruses but AI-driven robo-advisors, capable not only of storing a client’s risk profile and all relevant market data — and analyzing a client’s whole history of investment choices, but also of giving investment advice that is more objective and immune to human biases, as well as more cognizant of the investor’s preferences. In its report, BCG warns wealth managers  about this new digitization, with the position that wealth managers who wait out such developments and continue with business as usual “are unlikely to prosper as transformation of the industry gains momentum.”

For several years, bankers have been inundated with prophecies about business disruptions from Fintech startups who might hit large banks, like Uber and Airbnb hit the transport and accommodation sectors. Contrary to such hype, research today speaks more of banks which assimilate or outright absorb Fintechs.

Asked if he considers statements such as BCG’s to be pertinent analysis or more of a consultancy sales pitch, Awad says he expects the reality to be a bit of both, with changes that might happen faster than many would think possible. “If one reads into what is happening in the area of artificial intelligence and related technology, one can predict that the concept of private banking will be totally different in 10 or perhaps 15 years,” he says, before adding that personal relationships, trust, and friendship play important roles in private banking, and that banks in the Middle East are unlikely to lead the global shift to robo-advisors, if one takes into account the region’s predominantly conservative client mentality. “It’s a major mentality shift and also a generational issue. Perhaps the next generation, with the evolution of what is happening in the world, will be more prone to go for this new sort of private bank,” he says.

BLF’s Salem likewise does not fully buy into predictions of a complete shift to digital in private banking. “Whatever will develop in the wealth management industry, the human factor will stay — discussions, eye contact, personal interactions, etc. But digital is very important because you have to differentiate yourself, meet client expectations, and enhance client experience, but you also have to enhance your value proposition, your advisory proposition, and staff skills,” he says, further noting that digital transformation is also made inevitable by compliance-related practicalities and for the alignment of internal processes.

Coming back to more immediate issues, some paradigms of the wealth management industry in 2017 do not sound different from the recipes of earlier years. Portfolio diversification is advice that has been recited by private bankers in every interview over the last ten or fifteen years; another mantra is to tailor investment offerings according to client needs and risk appetite. In such basics, the industry appears to have its identity and continuity, whether the times and global market conditions are smooth or rough. 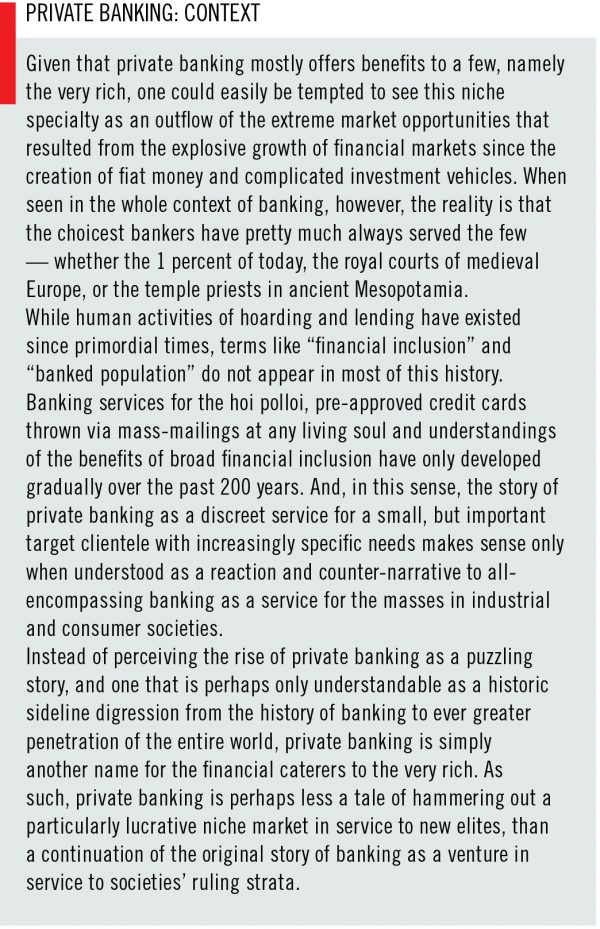 As to current hopes for private banking in Lebanon, there is palpably greater enthusiasm in the corner offices of private banks around the city of Beirut. In comparison, a few years ago development of the domestic market investment opportunities fit for private banking was, at best, talked about in tentative terms, as something that would be nice to have.

Now BLF’s Salem is enthusiastic in delivering his view that foreign operators of private banks will tend to move out of the Lebanese market more than come into it, with local private banks being on the rise. “I think the Lebanese market in [the] future will be more for local players who have everything needed to deliver the service locally,” he says. Albeit refusing to disclose the ratios for assets under management  (AUM) in the bank’s two private banking operations in Beirut and Geneva, he continues, “We are developing the private banking activity at BLF and today we are focusing on Beirut and Geneva in developing our advisory skills and all our product capabilities with asset management, continuing along the trend established in recent years to develop solutions and create new products for clients, streamlining their journey.”

Awad is, in part, more forthcoming, as he states the respective AUM sizes of Audi Private Bank in Beirut and Geneva, when he announces that the bank somewhat extraordinarily saw more AUM growth in Beirut than Geneva last year, reaching AUM dimensions of about $4 billion in the former and $6 billion in the latter city. He concedes that this trend of faster AUM growth in Beirut versus Geneva was not repeated in the year to date — without referring to the reasons for the atypical development in 2016, however, which of course gives room for the assumption that this inflow was related to the central bank’s “financial engineering.”

Overall, Awad is also upbeat about Beirut, saying, “As far as restructuring of private banks here in Lebanon, we have been working in the past few years at Bank Audi to set up private banking as a business line. Today we have the operation in Switzerland, the operation here, in Saudi Arabia, and in Qatar. Those are the four main booking centers. One way to go is to create offerings where clients can bank with one bank, Audi Private, and you [as a client] can go into different geographies and according to the risk profile, chose different booking centers. The investment proposition needs to be unified and it is; we have a central investment team. At the same time we cater to clients in different markets and offer them different booking centers. This is the model that we have put in place, and it’s working very nicely for us.”

It’s about our purses