Executive magazine was born during a boom. The Lebanese Civil War had been over for a few years and the Lebanese were high on optimism, eyes alight with opportunity. Many – like the very founders of this magazine – were returning to their homeland to invest, build and create the Lebanon of their dreams.

Those coming back and those who had never left joined hands for their country, launched new businesses, imported novel concepts and jump-started industries, sectors and the economy at large. It is these optimists, risk-takers, dreamers and doers of the 1990s and early 2000s that began to reestablish a Lebanon for us to love. Their persistent patriotism was demonstrated through incessant effort despite losses, both material and moral. Their belief in this country was the foundation of our current way of life, one where we have access to a rich social and cultural lifestyle.

Over the years the Lebanese government has increasingly floundered, bringing us a debilitating national debt and an embarrassing, hazardous trash crisis, while failing to provide 24-hour electricity and a president. Throughout, Executive has exposed these failures while highlighting positive private-sector, social and cultural advances that have kept us here despite the difficulties. 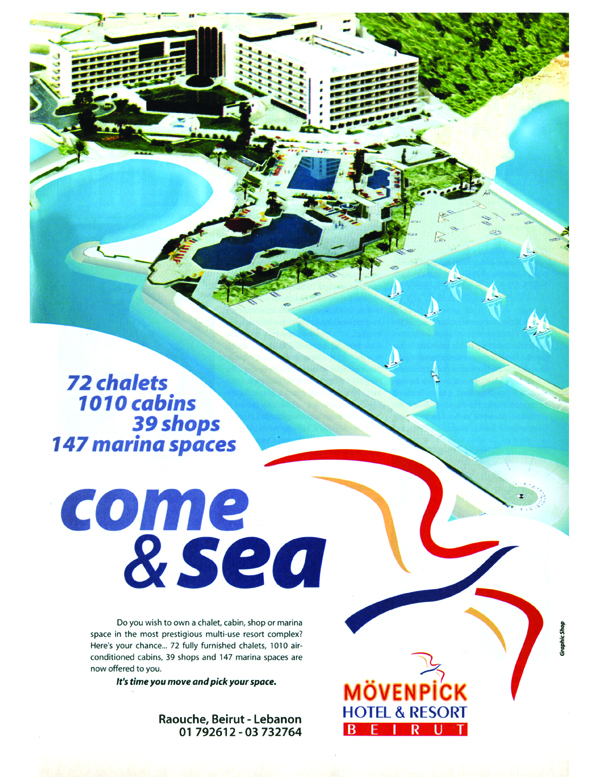 The Mövenpick hotel in Raouche, Beirut, was one of the many high-end projects of the post-Civil War construction phase. (Ad from December 2000)

Throughout the past 200 issues, Executive has also been a platform for businesses to advertise their brands’ initiatives and innovations. Though created to sell, collectively these ads also tell a story. As we look through the earliest editions we laugh, cringe and fondly reminisce about the life we used to have and what we aspired towards at the turn of the century. These ads are a reflection of that time – a time of hope.

In the 1990s Beirut began accessorizing its skyline with cranes. It hasn’t stopped since. Advertisements for real estate and development exhibitions, as well as individual buildings and neighborhood projects, demonstrated how the country was literally being rebuilt. At the time Zaitunay Bay was nothing but a twinkle in Solidere’s eye and the Mövenpick hotel was a budding debutant, but downtown Beirut was a bride in all her glory. After restoration, the heart of our capital quickly burgeoned into a lively pedestrian district lined with restaurants and shops. Fast forward to this past year: a barbed-wire-strangled Downtown was the site of police clashes with civilian protesters demanding basic rights. Many unwavering businesses have retained their central locations but many more have relocated or shut down since a series of setbacks, beginning with the 2005 Rafik Hariri assassination, followed by the July 2006 War and escalating internal strife. The buildings constructed and advertised then are mostly vacant now.

In the days before the Lebanese Lira underwent a Monopoly-inspired facelift, ads were telling us we hardly needed to carry cash at all. In the 1990s we were just learning how to shop with plastic, and banks – some of which have since disappeared from the market or revamped their brand identities with shorter names – were announcing such advancements along with online banking and subsequently mobile banking. Credit Libanais even tried to pitch TV banking – a concept that didn’t quite take off. 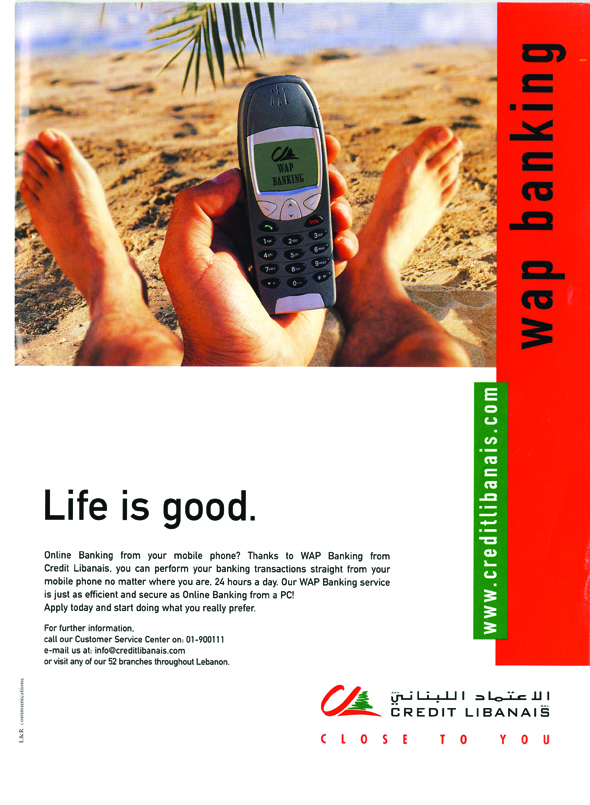 Who would’ve thought you could do online banking on a phone like that? (Ad from June 2001)

The Lebanese have always had a taste for tech. The many technology-related advertisements once placed in Executive show just how far the world has come in a few short years, and how close behind Lebanon has always been. Looking at the ads today is amusing: they promote fast internet “breaking the speed barrier with 64kbps!” and electronic devices that store the equivalent of a few digital photos today. TVs labeled “flat screen” were cumbersome, refrigerator-sized things – some, 46 cms thick at the base. Vital office equipment included fax machines, printers and cordless phones; today you can run a business on a smartphone. Weirdly, phones are about the same size today as they were back then – after a brief and unsuccessful detour towards miniature mobiles. Pre-smartphone consumers actively sought out digital cameras but phone cameras were starting to evolve too: Samsung produced an innovative 180-degree rotating camera lens – pushing us into the selfie era.

Back when mobile numbers all began with 03 we were learning how to text. Cellis and LibanCell – before they became Alfa and Touch – were proclaiming astonishing advances: roaming and internet (did life exist before mobile internet?) The networks offered WAP, GSM and later GPRS – the painfully slow great-grandparents of 4G. Believe it or not, call rates were higher than they are now, so to save “units” young phone-owners didn’t always reply by text; friends had code replies: one missed-call meant ‘no’, two missed calls meant ‘yes’, and three meant ‘come down, I’m under your house’. NaharNet targeted the tech savvy who wanted to be different, their advertisements proudly announcing users could text pictures (however unclear and pixilated), download pop-song ringtones and even use photos as a phone background.

At the turn of the millennium the Lebanese began to get more comfortable and spend more money on living well. During that time there was an onslaught of advertisements in Executive for luxury watches, clothing, cars and boats. Clothing brands marketed the latest fashions and stores, though shopping destinations looked nothing like they do today. Beirut Souks was just a plan, Metropolitan City Center (now Le Mall Sin el Fil) was looking for tenants in 2002, ABC Achrafieh didn’t open until 2003 and Aïshti was just beginning to sow its empire in Downtown, though we did have the now-defunct Factory Center in Mkalles.

The Association of Lebanese Industrialists encouraged economic patriotism – buying products made in Lebanon. Meanwhile trade fairs for various industries encouraged import and export exchange. HORECA had continued success and other food businesses advertised their activities too.

In the true spirit of Middle Eastern hospitality, Lebanon began to rebuild its reputation as a hospitable tourist destination in the late 1990s. There was a constantly increasing influx of tourists – expats returning to see family more frequently, foreigners from the Gulf coming for a good time, as well as other tourists curious to visit. Travel exhibitions were held and the airport even promoted its duty-free shopping. 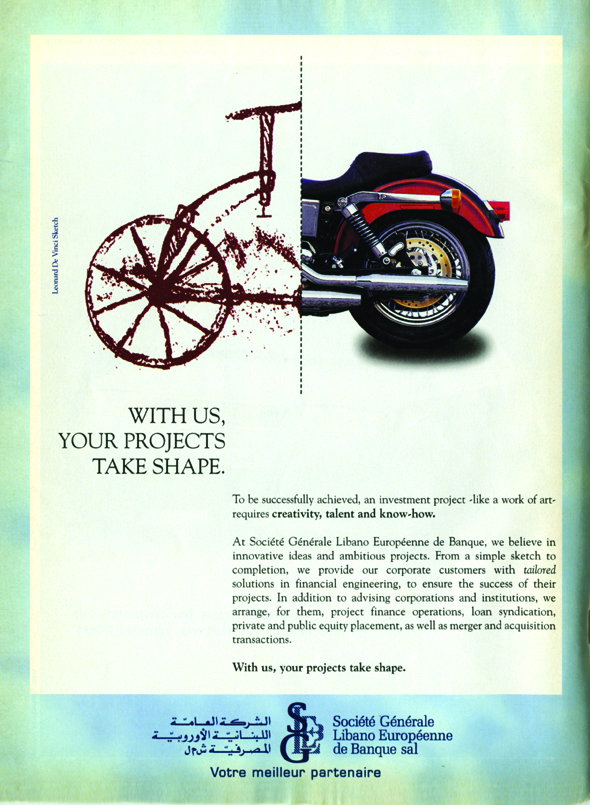 Text-heavy ads used to be the name of the game. (Ad from October 2002)

Quicker than other sectors, the hospitality industry was reinstating its status as a hub. Restaurants were mushrooming on the coastline, in the heart of town and on mountain tops – and they included cuisines for every taste. From the Thai Blue Elephant and a worldwide love affair with sushi that made its way to Beirut early on, to Western concepts like bagels at Tribeca and Bread Republic, Beirut saw a surge in new restaurants and concepts.

Lebanon was also turning into a nightlife epicenter, earning quite a reputation as a party city. Before The Grand Factory there was The Basement. Before O1NE there was Element, Circus and Strange Fruit. Before the hour-long traffic pile-ups in Mar Mikhael, we slowly inched down Monot Street, where now only a few iconic bars remain. While popular nightlife districts have witnessed several shifts, the legendary B018 is one of the few venues of the late 1990s that’s equally popular today.

Our wine industry was gaining momentum too – with sometimes cheesy advertising. At the time cigarette manufacturers were still allowed to advertise and went all out with several multiple-page spreads.

Culturally, the country blossomed with concerts, performances and live events, increasing every year in caliber and quality. Established festivals like the Baalbeck International Festival were drawing in more and more international performers and local legends, while new events were launched every year and individual concerts increased.

Also young at the time, Sukleen advertised in Executive’s early issues, proclaiming: “Having a cleaner Lebanon is what we all want.” Indeed, if only we could go back to the good ol’ days of trash collection.

200 issues later Executive persists – as do its advertisers. Businesses have come and gone, politicians have stayed, and those who have survived continue to power through the tough times and give their all to keep Lebanon on its feet. As hopeless as things may sometimes seem we are still here too, taking risks and believing. Because, after all, hope dies last.

Improving the economies of words