Home Entrepreneurship The fast & the furious

The fast & the furious

The acceleration business in Lebanon is moving faster than ever, and as the impact of Circular 331 is felt across the ecosystem, startups and scaleups are being presented with more opportunities to learn from both local and global experts. The acceleration process varies across the different programs; each accelerator has its own pattern in terms of mentorship, equity slices and investment, with some offering companies stints abroad beyond the Middle East. Executive contacted the representatives of four acceleration programs here in Lebanon to discuss their startups’ itineraries, financing, their views on challenges which they feel are the most pressing to the Lebanese entrepreneurial ecosystem and their vision for the future.

A new accelerator burst onto the scene in 2015, another product of Circular 331 and an international addition to the Lebanese entrepreneurship ecosystem. The UK Lebanon Tech Hub, hosted in the Beirut Digital District (BDD), is an accelerator for scaleups – companies that are beyond the idea creation stage which are looking to expand and gain exposure to markets, revenue and capital investment. CEO Colm Reilly, who has a career in business and economic development, heads the program and is supported by a team of international and Lebanese staff. The edge, they say, that the UK Lebanon Tech Hub has is its unique blend of intense mentorship and instruction in ‘phase 1’, combined with an overseas ‘phase 2’ which allows companies within the program the opportunity to travel and work in London, gaining vital access to markets which they otherwise would struggle to reach.

The program saw 45 companies enter into phase 1, which was reduced in phase 2 to 26 companies. Unlike many other accelerators, the UK Lebanon Tech Hub doesn’t take equity. “We are a 331 funded program for the first two years,” explains Elie Akhrass, program manager at the hub. “The major condition is not to generate revenues out of the program for the first two years. We’re servicing the ecosystem without generating any revenues; this is the reason we don’t take equity.” Although the board members have not decided upon the final figures, and therefore cannot release the volume of funds received from 331, Akhrass stresses they are 100 percent guaranteed by Banque du Liban (BDL), Lebanon’s central bank, for funding, and points to the value of the British-Lebanese partnership, whereby BDL provides the capital and the British provide the experience and the networks through PA Consulting Group, a British consultancy specialising in technology, innovation and management consultancy. 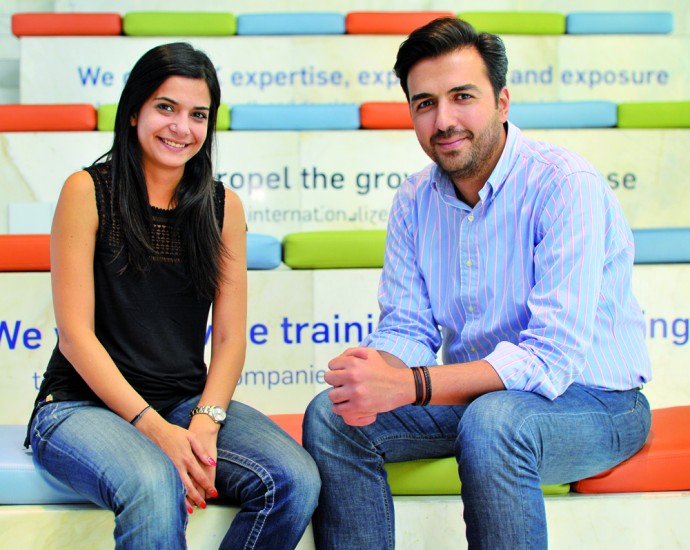 The first four-month phase of the program focussed on a rigorous entrepreneurship education derived from Babson College, a private business school in Massachusetts, renowned for its entrepreneurship education in the United States. Lectures, guidance and mentorship have been conducted under the auspices of a Babson College curriculum, which they felt filled a gap in the knowledge market of accelerators in Lebanon. “We had only one cycle [of previous acceleration] with Seeqnce a few years ago, and it was a one time cycle,” explains Akhrass, “so we don’t really have good practices of acceleration in Beirut to benchmark ourselves to them and use them as a reference. So we brought the international model from Babson,” with adaptations to the local market incorporated during the acceleration program. Mentors are a mix of global and home-grown talent, such as Elias Ghanem, former MD of PayPal MENA now CEO and co-founder of Telr.com. For phase 2, fifteen companies are heading to London this month and eleven companies are staying behind in Beirut to receive similar training and guidance. For those heading to the UK, the emphasis will be on “selling”, explains Akhrass, and exposure to networks and individuals who can assist with the growth, expansion and development of the fifteen companies who are looking to increase their value. The notion of a successful exit for the companies in the program is also high on the agenda for the directors. “We hope that the fifteen in London and eleven in Beirut will get international funding from international funds,” explains Akhrass, “that’s why we’re building these networks with external markets to provide the funds. We hope that after five years at least one or two companies will have an outstanding international exit; that’s the aim of the program. Scale them in a way to make them ready for international funds to provide funds for these companies.”

However, both Akhrass and Lama Zaher, Communications Manager at the UK Lebanon Tech Hub, stress that the entire hub goes beyond a simple accelerator. UK Lebanon Tech Hub’s initiative is its research drive into the market, which includes studies on sectors that it feels Lebanon can excel in. Beyond round tables and contacting Lebanese diaspora members, they have created a comprehensive market study and have benchmarked the technology sector against neighbors. They hope to collate and analyze results gained through the diaspora by the end of the year. More than this, Zaher explains that the accelerator is actually just one of four parallel initiatives designed to aid and assist in developing Lebanon’s entrepreneurship sector; “Our main objective is to support the growth of the knowledge economy in Lebanon in order to increase GDP and economic growth in general, along with the creation of jobs.” To do this, alongside the accelerator program they have incorporated a Capacity Building & Signposting program, an Outreach program, and a Marketing and Communications plan to help showcase Lebanese talent and raise the country’s profile. Both Akhrass and Zaher emphasise that the programs plant the seeds for sustainability, with the Outreach program targeting the schools and universities to promote entrepreneurship and inform them about the synergies between sectors provided by technology. “The purpose of the hub is not to duplicate efforts, but to complement existing ones and fill the gaps in the ecosystem.” The Capacity Building & Signposting program also seeks to provide training and mentoring to individuals and companies inside and outside of the ecosystem; from startups, to small-medium enterprises (SMEs) to venture capital companies and banks wishing to diversify portfolios and invest in technology companies.

This complementary program is one of four that is key to the long-term plan of the UK Lebanon Tech Hub. Akhrass notes the importance of connectivity, and explains that by “building networks for the ecosystem, everyone can benefit from them. We are trying to establish this multiplicity of connections, not to limit ourselves to the UK brand or to San Francisco.” This is evident in the events that the hub helps to organise, which most recently included collaborating on a TechWadi Roadshow in Beirut, an organisation which works to connect Silicon Valley to the Arab world.

While the design has not been finalised yet, Zaher and Akhrass are hopeful about a second round of acceleration in 2016, but are mindful about the long-term sustainability of the entire project. “We are now contemplating a second acceleration cycle for Spring 2016. We are still at the drawing board. We will probably accelerate fewer companies but focus on certain sectors with the highest growth potential, we will see.”

While the UK Lebanon Tech Hub is working to increase the knowledge exchange across seas and industries, it acknowledges the need for a cohesive effort across all the country’s sectors to ensure the survival of a successful entrepreneurship ecosystem. The UK Lebanon Tech Hub acknowledged this in a release sent to Executive, which noted that “Lebanon needs to build its core knowledge and wealth production capabilities. Such an effort requires collaboration between willing public institutions such as BDL, academia, industry and the investors.” If their efforts to educate players both inside and outside the ecosystem prove successful, that cohesion should not be too difficult to obtain.

Executive Editors represents the voice of the magazine.

What’s tech got to do with it?