Something old, something new

Carpets, cutlery, glass, soap, furniture—these traditional Lebanese crafts have a valued place in the country’s—and the region’s—history. Industrial development in the last half of the 20th century has, inevitably, affected Lebanon’s traditional artisans. One the one hand, it has driven demand down for artisanal crafts that are usually more expensive than mass-produced imports. On the other, for local artisans who have weathered weary economic waters, access to a new global market has been made easier, a result of improved online marketplaces, social media, and internet-based communication. There are also multiple initiatives underway in Lebanon that seek to ensure Lebanese artisans find their place in increasingly crowded local and global markets. For traditional artisan crafts in particular, local and international organizations have worked to improve their sustainability by providing technical, industrial, design, and marketing support, and by providing a place for craftsmen to market their goods.

The United Nations Industrial Development Organization (UNIDO) and L’artisan du Liban are two organizations that have helped keep Lebanese artisanry alive by providing production support, serving as design catalysts, and offering a place for local craftsmen to market their wares. Established in 1979, L’artisan du Liban was Lebanon’s first social enterprise, and it sought to keep artisans active and safekeep artistry and heritage by providing local craftspeople a marketplace for their goods. UNIDO has been active in Lebanon since 1989, and supports sustainable development across multiple sectors, including its work with craftspeople. Both organizations have played similar, but distinct, roles in sustaining local artisanry.

Despite a strong history of design generation and export in Lebanon, recent economic stagnation has made it difficult for some traditional artisans to compete with cheaper imports from places like China. For example, where 10 years ago there were several glassblowers in Lebanon, today only one family, the Khalifehs in Sarafand, remain. The period between 2011 and 2018 marked a 37 percent increase in imported glass and glassware, according to data by Blominvest Bank, with which Lebanese glassblowers had to compete.

Artisans across the handicraft spectrum have had to adjust to shifting market trends and find new ways to make their products attractive to consumers in a modern market. Driven, in part, by shifting market trends and demands, artisans have used several tactics to stay ahead of the game, from introducing subtle, more modern-looking design twists, to adopting new materials and packaging methods to make traditional goods more marketable. 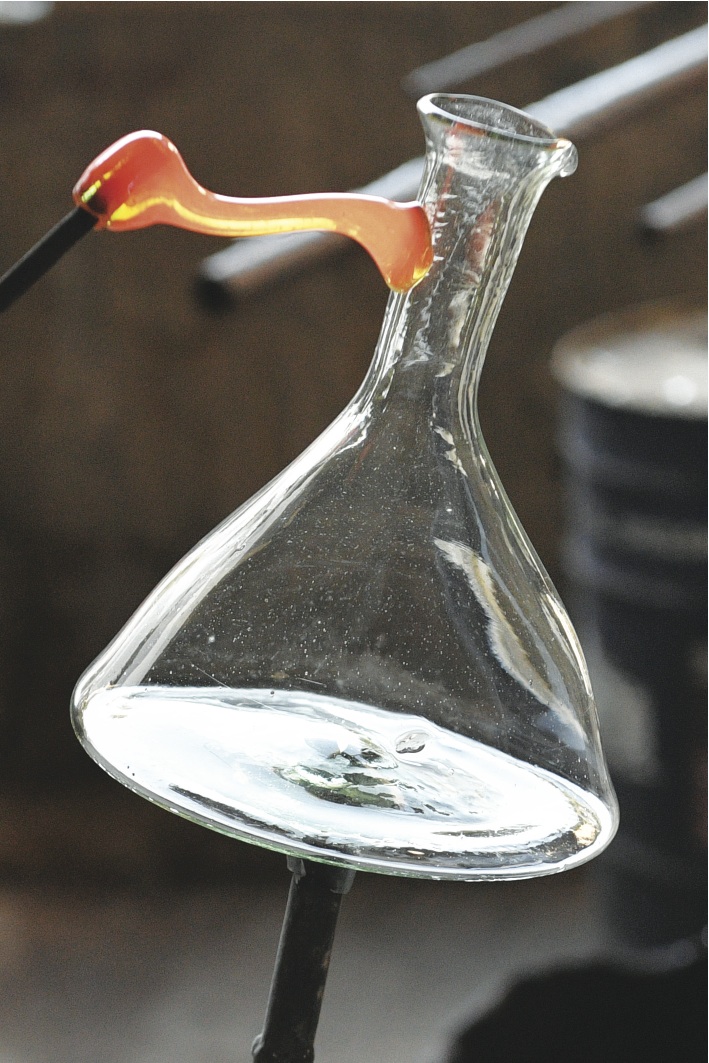 The rapidity of changing trends, a clientele more aware of global trends and buying options, and the combination of rising ease of travel and digital advancements have accounted for the largest market shifts, says Hadi Maktabi, owner and curator of Hadi Maktabi carpets, who holds a PhD in Islamic Art from Oxford. Difficulty in identifying a unified “Lebanese taste” has also made marketing to a local audience challenging. And it is in this climate that producers and artisans must decide which model they want to adopt, whether that be identifying a niche within a larger market and catering to it, or following the “supermarket model,” which Maktabi defines as being largely mass-produced, cheaper wares made abroad that appeal to a broad audience (think IKEA).

“Fifteen years ago, it was the supermarket model, and you had five to 10 big dealers who catered to everything,” Maktabi says, referring to the carpet industry. He argues that where trends in the 1990s shifted every 10 years or so, recently they have begun changing every two to five years.

The advent of the internet and improved digital marketplaces have sped up the introduction of new styles over the last 20 years. Rapidly growing global markets also meant the Lebanese market was flooded with more affordable, modern products that were designed in Europe, but were produced in places with cheap labor supply. “Most people working on this [supermarket model] side are dealing with products mass produced in China and India, and then selling them here,” Maktabi says. “But what they’re selling now is not craft, it’s just a product.”

Carve out a niche

Now, within the last few years, more have tried to carve out a niche in a crowded market—like Maktabi’s focus on antique carpets and textiles—specializing in providing a specific product. Complicating the matter, on the local front, he argues, is the rising European influence and the need for the Lebanese to find their place within that trend. Even local geographical considerations play a role in this. “Drive a few kilometers south of Beirut, and it’s like entering a different time period,” Maktabi says. Torn between the occidental and oriental, this clash of cultures has made designers and artisans alike, who choose to follow the niche market approach, have to define a narrow target audience.

But those specialists, specifically some traditional artisans, have needed help finding a viable market for their niche crafts. A few kilometers south of Beirut, Houssam Outabashi is found in Ouzai with multiple workshops lining the street. Here, Outabashi, a master in traditional marquetry and inlay techniques, can look at a piece of mother of pearl and name its country of origin by its color. Marquetry is a process by which small pieces of different types of wood are bundled to form a pattern, and then shaved in thin layers, while inlay design is a process in which chunks of wood are carved out and replaced with the shimmery pieces cut from sheets of Mother of Pearl to create intricate designs. 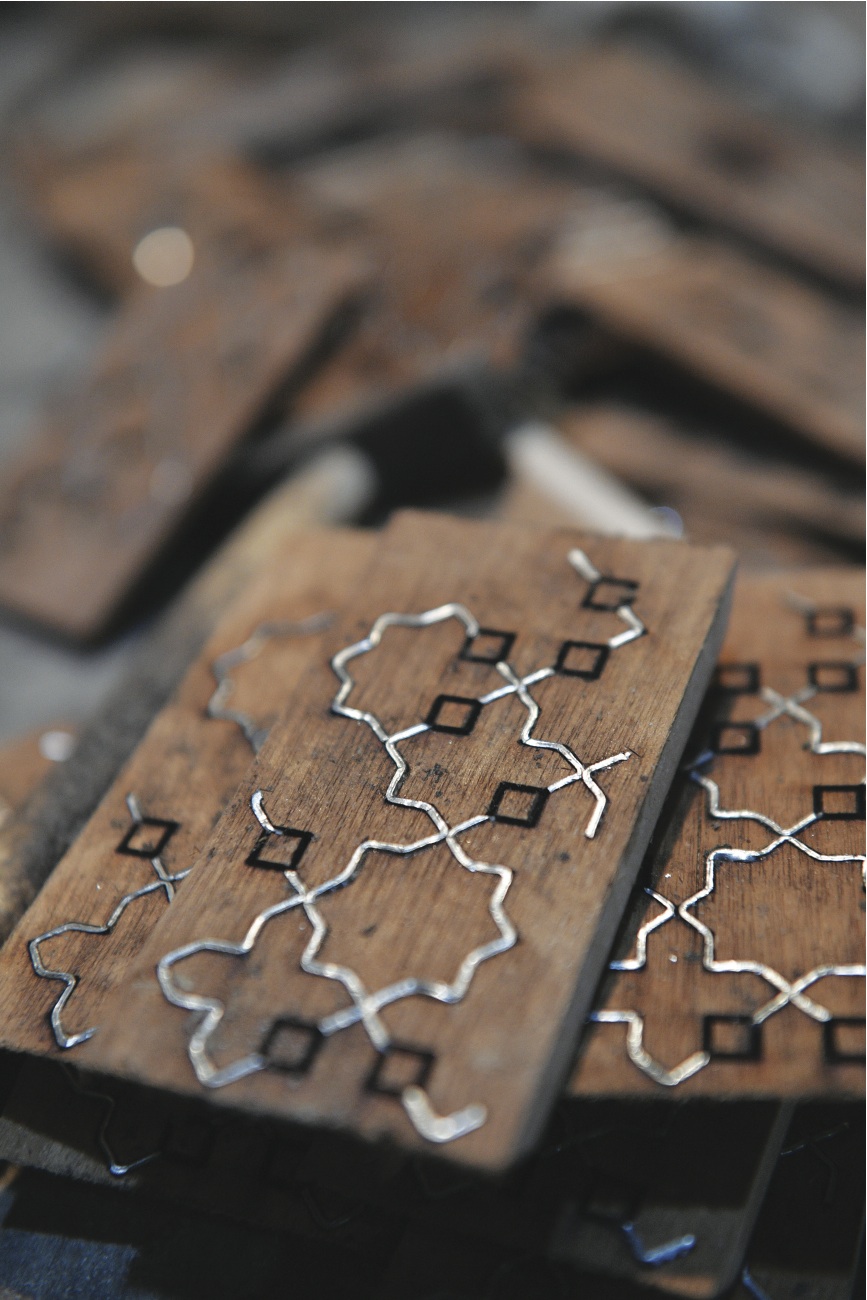 Outabashi specializes in the traditional styles of his craft, however, he has started modernizing some of his designs. L’artisan du Liban has provided him with support to help preserve his craft, which goes back as far as the 1800s through generations of his family. Nour Najm, creative director of L’artisan du Liban, says they work with Outabashi, designing objects that Outabashi creates by hand and then are sold in L’artisan du Liban store.

Further south in Sarafand, L’artisan similarly works with the Khalifeh family who create glassware out of recycled glass—which in a country that has an excess of garbage, is remarkable. The Khalifeh’s only turn on the oven five to six times a year, but can turn it on up to 10 times when there is an order to be filled—otherwise it is a resource drain. When it is on, six to eight people work in shifts around the clock for 15-20 days to fill an order. Najm says L’artisan makes sure to place a large order with the Khalifeh’s each time they turn on the oven.

In the small, run-down warehouse where the Khalifeh family makes their glass, Najm is thinking about what she can do to give the glassware a modern twist—for her, the answer is color. With colored glass she bought from the US, the glassblowers are experimenting with different techniques to potentially incorporate color into their traditional designs. Najm says they have introduced a lot of small details to modernize traditional designs and help make them competitive in today’s markets. “Small twists change everything,” she says.

UNIDO has also worked with local craftsmen to help them update traditional designs and help artisans peddle their crafts. For example, UNIDO worked with Jezzine cutlery craftspeople—as well as local soap makers and tark el-fouda (embroidery) craftspeople—to help them modernize designs and industrialize production. Two years ago, UNIDO launched a program in partnership with the Ministry of Industry and funded by the Austrian government to help preserve traditional artisanry and improve livelihoods of artisans in these sectors, says Nada Barakat, national project coordinator at UNIDO. 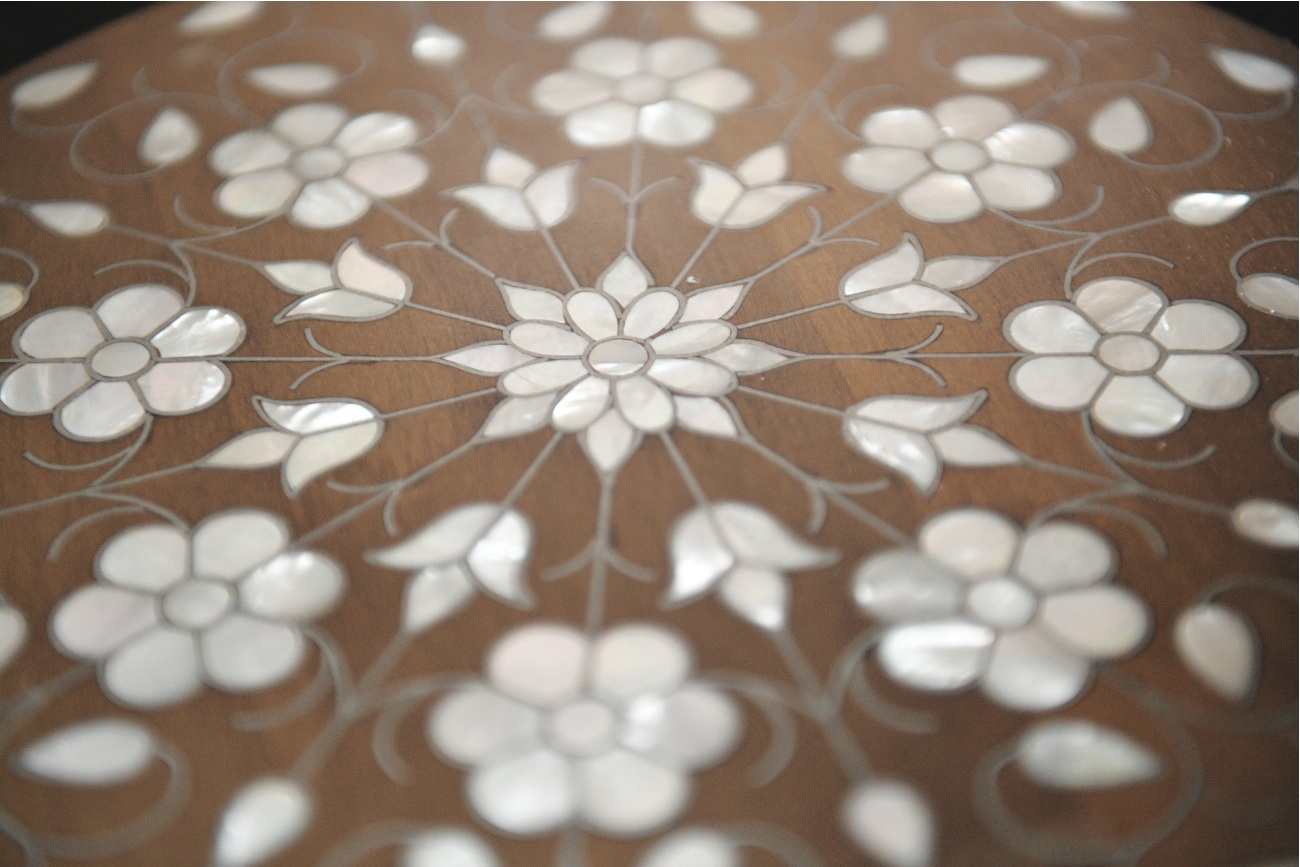 Jezzine cutlery, for example, was once thought of as a gift that sat in a wooden box unused; the product had to be re-imagined into something people would by to use and enjoy. Barakat stressed the importance of marketing: they did away with the old wood box and started packaging the sets in cardboard, which cut down costs and made the sets more practical. To better market the soap, they did the opposite and introduced an attractive olive wooden box as packaging. Jezzine cutlery, which was traditionally made out of olive wood and featured bird-like motifs on the handles is now sometimes made out of resin, but maintains the older features with a modern edge. Creating the mold for the resin-based handles made the production process and end-product marginally cheaper, but consumers can still buy the cutlery with the traditional wooden handles as well.

Barakat says that while the collection is primarily available to local markets, negotiations are underway with Coincasa, an Italian retail outlet, to market the collection there. L’artisan du Liban has a slightly larger global reach with their online store that opened last year. Najm says that less than 10 percent of their sales are global, but they have clients all over Europe and in the US, and they attend yearly trade fairs in Paris.

Both entities—UNIDO and L’artisan du Liban—have worked to keep Lebanese artisanry alive and are beginning to introduce traditional local crafts in international markets. Though industrial development made traditional crafts more expensive, recent globalizing trends and improved digital markets may help some local artisans find a viable market for their goods abroad. While it is too early to tell what the future holds for Lebanese crafts in the international market, at least here at home some local artisans have found the support needed to keep centuries’ old traditions alive.