Home Banking 2014: Looming taxes Banking on the future of Iraq

A pilot program to connect Iraq's ATMs to a national, interbank switch is set to begin this summer

Lebanese banks have enjoyed a long history of Iraqi businessmen coming to the country and banking here, or so boasts Makram Sader, secretary general of the Association of Banks in Lebanon (ABL). Now it is the banks that are taking their businesses to Iraq. But while the banks see a lot of promise in the Iraqi market, their small investment to date reflects the major difficulties of operating a commercial bank in Iraq.

[pullquote]Iraq is still one of the most under-banked countries in the MENA region, with estimates that 80 percent of the population does not have a bank account.[/pullquote]

With seven Lebanese banks operating 14 branches in Iraq, and giants BLOM Bank and Bank Audi set to enter the market within the year, more than half of Lebanon’s alpha group banks will be represented. These banks see potential in the Iraqi market as it undergoes modernization and revitalization of both physical and financial infrastructure. Though they already make up half of the total foreign banks present in Iraq, excluding representative offices, Lebanese banks’ investment in Iraq is still “light” compared to their capital base, according to Sader, and their activities are still limited.

After a slight drop between 2008 and 2009, Iraq’s nominal GDP has consistently grown from its 2009 level of $111.7 billion to $215.8 billion in 2012, according to the World Bank. Domestic credit to the private sector as a percent of GDP has been rising steadily, from 3.8 percent in 2009 to 6 percent in 2012. While still small compared to the regional average — at 23.6 percent of GDP in 2012 for MENA minus the GCC and Israel — the increase in lending as a percentage of GDP is a positive and promising trend.

According to a 2013 report by Singapore-based but Iraq-focused Sansar Capital, Iraq is still one of the most under-banked countries in the MENA region, with estimates that 80 percent of the population does not have a bank account. According to the World Bank, the country had 5.4 commercial bank branches per 100,000 people in 2012. By comparison, Lebanon had 29.3 branches per 100,000 people.

The lack of ATMs — two for every 100,000 inhabitants — is exacerbated by the fact that most ATMs are not connected to a national switch and thus customers from one bank cannot use the ATM of another bank to make transactions, creating more barriers to consumer banking. These pose both opportunities and constraints for Lebanese banks moving into the country.

However, several reform efforts appear promising. Two projects to facilitate retail banking are in the pipeline. The first is the implementation of a national switch that would connect ATMs of various banks. The second is the Iraq Interoperable Mobile Payments System (IIMPS), which could dramatically increase the penetration of banking among the cash-oriented population. Both projects are due to begin pilot testing this summer.

[pullquote]Despite minimal interference from an Iraqi controller, it’s not easy being a commercial bank in Iraq, where state owned banks dominate the field and enjoy several privileges over their commercial counterparts.[/pullquote]

Another encouraging development is the government’s efforts to develop the country’s infrastructure, which could lead to an increase in economic output triggering an increase in demand for banking services. In 2013 the Iraqi Ministry of Planning launched Iraq’s second National Development Plan, which laid out a roadmap for the country’s economic recovery between 2013 and 2017. The plan consists of a $357 billion investment in infrastructure in various sectors of the Iraqi economy. If carried out, it could have a massive effect on the economy: in general, the World Bank estimates a 1 percent increase in economic output for every 10 percent increase in infrastructure allocation. Iraq’s total national budget in 2013 was $118 billion.

These projects could increase both lending and deposits at banks. According to a 2011 World Bank report, Iraq’s asset-to-GDP ratio was 73 percent after adjusting for certain state owned banks’ overstated asset valuations — compared to 130 percent for the MENA region.

Such numbers appeal to Lebanese banks, which are putting their faith in the growth of Iraq’s economy and banking sector. “With time, I believe the banking industry will grow, and quickly,” says Fahim Mo’dad, advisor to the chairman at BLOM Bank and the individual responsible for the bank’s expansion into Iraq. BLOM is planning to open two branches within the year, one in Erbil and one in Baghdad, according to Mo’dad.

Lebanese banks in Iraq are subject to the country’s 2003 Banking Law, as well as the same international regulations they are following elsewhere. Licenses for a foreign-owned bank in Iraq are issued by the Central Bank of Iraq (CBI), and require compliance monitoring from the country where the parent bank’s head office is located. They also require the Lebanese central bank’s approval. Sader explains that the Lebanese Banking Control Commission signed an agreement with its Iraqi counterpart that would make BDL control their activities in Iraq. “[The CBI] doesn’t have the human resources to control … [BDL] is helping them to control our maximum,” says Sader.

[pullquote]The lack of ATMs — two for every 100,000 inhabitants — is exacerbated by the fact that most ATMs are not connected to a national switch … creating more barriers to consumer banking.[/pullquote]

Despite minimal interference from an Iraqi controller, it’s not easy being a commercial bank in Iraq, where state owned banks dominate the field and enjoy several privileges over their commercial counterparts. State owned banks have a monopoly on transactions involving the government and government owned companies. In a country where the government controls the oil sector, which accounts for three fifths of the economy, and where the public sector and state owned enterprises employ about half the labor force, this places severe limits on the business of commercial banks.

This has led to the disproportionate size of state owned banks compared to commercial banks in Iraq. According to Abdul Aziz Hassoun, executive director of the Iraqi Private Banks League, the seven state-owned banks account for more than half of all bank capital with IQD 14 trillion ($12 billion) out of a total IQD 25 trillion ($21.4 billion).

According to Hassoun, Lebanese banks are under the same constraints as any commercial bank in Iraq. The only transactions Lebanese banks can do in Iraq with government accounts or government owned entities is issuing letters of guarantees (LGs). They cannot, for instance, take deposits, make transfers or issue letters of credit (LCs) from these entities. This was confirmed by Elias Achkar, head of the research department at ABL. However, Sader claims that Lebanese banks are trying to work out a deal where they would be able to make transactions with the government and government owned companies. 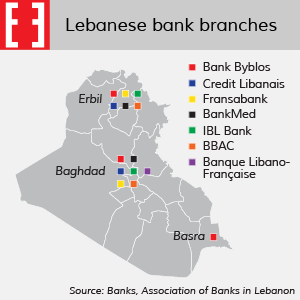 Despite the room for growth in lending to the Iraqi market and the competitive edge of Lebanese banks with superior technical infrastructure and internal processes, it is not the lending ceiling that is imposed on every Lebanese bank abroad by the BDL that is crippling their activities. In fact, lending activity only accounts for a small margin of their profits.

According to Sader, the primary activity of Lebanese banks in Iraq is trade finance, with their primary source of revenue coming from LCs and LGs. They also make margins off foreign currency auctions, whereby they buy foreign currency from the Central Bank of Iraq at the daily currency auction — the only way to convert the Iraqi dinar — and then sell it to their clients with a certain margin of profit allowed by the CBI, according to Mo’dad.

Their smaller lending activities are mostly geared toward their Lebanese clients, according to Hassoun, who claims it is normal for a foreign bank to first capitalize on these business relations. “When Standard Chartered came to the country, they were only covering the needs of British companies working in construction and oil,” he says.

Despite these setbacks, Sader claims that the Iraqi banking sector is working on modernizing its infrastructure, something the Lebanese banking sector is well poised to assist them with. In April, the Iraqi-Lebanese Banking Conference was held in Beirut which highlighted a common interest of both sectors in improving the banking environment in Iraq’s recovering economy. With time and the right developments, the hope is that Lebanese banks’ strategy of early entry into Iraq will pay off handsomely.

The unwarranted embrace of decentralization