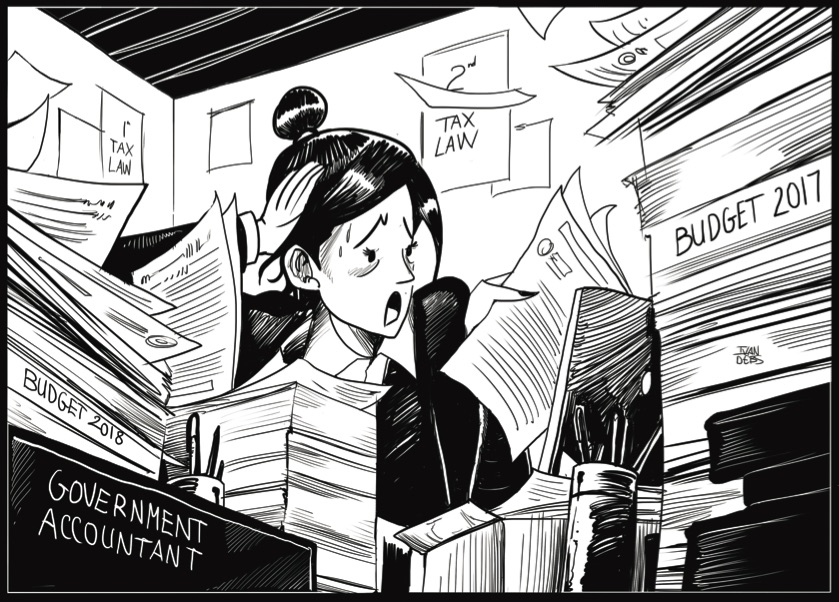 On paper, the Lebanese state should function. The constitution—frequently ignored as it may be—envisions a rational budgetary process that allows for planning, checks and balances among different branches of government, and an annual allocation of resources based on anticipated needs. In simple terms, every year the government should ask Parliament for the legal authority to collect and spend money. Parliament’s “yes” comes in the form of the budget law. A given year’s budget law should be passed before the year begins (meaning Parliament should have just legislated the budget for 2018—not, as it did, for 2017).

Lebanon’s constitution also says that before a new budget is passed, the previous year’s budget should be audited by the courts, ensuring the numbers all add up and that red flags are raised overanything that seems suspicious. Parliament has the power to then accept or reject the yearly audit (or closure of accounts, see below). But, Parliament cannot constitutionally pass a new budget before approving the audit of the previous budget.

None of this has happened in years. But for the first time since 2005, Lebanon’s Parliament last month approved a state budget (albeit for 2017).

Why Parliament went 12 years without authorizing the government to spend and collect money via a budget law is very difficult to understand. After over a decade, that might be the point: To the public, the budget saga is almost too convoluted, too politically messy, and too technical to make sense of—and if they can’t understand it, how can they hold politicians accountable? Or make any sense of how, in that period without a budget authorizing spending, the government was able to spend nearly $130 billion.

Politicians refer to different spending figures and different time periods over the last 12 years, complaining about public expenditures during the governing tenure of the opposite power. The figures floating around also do not consider the revenues from the entire period, and downplay the total amount of money spent and collected outside an approved budget. A 2013 book published by the Free Patriotic Movement (FPM) argues that government auditors cannot approve accounts from past years and charged that past officials—namely Future Movement leader Fouad Siniora, who twice served as Lebanon’s finance minister and once as prime minister—allegedly embezzeled the treasury to the tune of $11 billion. Of course Siniora has repeatedly denied the allegation: At a legislative session this April, during a televised session of Parliament, Siniora said, “The disbursement of every penny of the $11 billion is registered at the Ministry of Finance,” and asked why the finance ministry had not referred the accounts to the court. The Future Movement ended up also publishing its own book on the issue in 2013, but scholars of public finance say the arguments put forth by both books are far from solid gold.

In general, there are three political time periods in the last decade that help explain why passing a budget was not a top priority. In the first period, 2004 to 2008, there was one parliamentary election, but three resignations of government, one assassination of a prime minister, one occupation of downtown, and a war. Between 2014 and 2017, there was a long vacancy in the presidency and a period of non-performance in terms of the cabinet, as well as the Syrian refugee crisis, Daesh, and other security concerns. So compared to the preceding and following periods, the Sleiman presidency from 2008 to 2014 was somewhat politically stable.

But the functionality of all the institutions needed to pass a budget was at times there and at times was not. The interaction of the institutions during Sleiman’s presidency was better than the periods before and after, and a budget should have been passed—but it was not, and we have never been told why.

While the reasons Lebanon has not had a budget for the last 12 years are largely political, there was a technical obstacle that ended up hindering passage of a state budget: auditing.

Every year, the Ministry of Finance is supposed to forward the accounts of spending and revenue collection from the previous year to the Court of Accounts for an audit (see infographic timeline and explainer on the budget process). This audit, when done annually, is termed a closure of accounts. Parliament must approve the audit before a new budget can be passed. A new budget, therefore, cannot be passed until the accounts of the previous budget have been closed.

Herein lies the nature of the technicality: Because there has been no budget for 12 years, there can be no closure of accounts. Because Parliament was not authorizing the government to collect and spend the money it projected in the form of a budget law, there has been no legal document to compare the projections against what was actually spent and collected.

While spending and revenue transactions have been recorded for the past 12 years—and could be audited—scrutinizing these transactions is not technically a closure of accounts.

In an interview, the president of the Court of Accounts, Judge Ahmad Hamdan, told Executive that the court has not received the yearly accounts from the Ministry of Finance, and has not performed the closure of accounts since the 2005 budget. Alain Bifani, director general of the Ministry of Finance, confirmed this in an email to Executive. Back in December 2015, Bifani had told Executive in an interview that all but two of the financial accounts were completely finished, and the remaining accounts were at an advanced stage. Has the ministry now finished the remaining accounts? Bifani, in an October email to Executive, answered, “No, not yet. Work in progress. Very tough and complicated,” without elaborating.

After 12 years without a budget, the question last month was what would be more unconstitutional: continuing without a state budget, or passing one without an audit? Parliament chose the latter, and inserted a clause in its budget law pushing any audit down the road until after next spring’s parliamentary elections. If that audit actually happens, it could cover some or all of the years that Lebanon went without a budget, but for now, no one has an answer. There’s also a chance the budget law would be challenged at the Constitutional Council (see story on the looming showdown over public finances), but its fate was not clear as Executive went to print.

How the government spent without budget authorization

The budget is the document where the government projects expenditures and revenue, and Parliament gives its approval of this plan by voting it into law. Without voting a budget law for 12 years, Parliament essentially did not authorize the government to collect or spend any money. So how did the government spend nearly $130 billion in over a decade? It did so in three ways: through a budgetary rule allowing for temporary spending, advances from the treasury, and extrabudgetary laws.

On the last day of January 2006, Parliament voted the 2005 budget into law. It took lawmakers the full legislative session plus the January extension, a one-month period allowed by article 86 of the constitution, to get the 2005 budget on the books. That temporary, one-month extension, needed to be paid for somehow, because the government must continue operating, and that costs money. To pay for this, the same article of the constitution allows for a one-month allocation of spending, in case Parliament is slow on voting a budget. The one-month spending allocation is called the provisional twelfth rule, and it allows the government to fix its expenditures based on the previous year’s budgetary figures.

When Parliament ratified the 2005 budget at the end of January 2006—over a year late—it also passed another law, 717/2006, extending the provisional twelfth rule until a new budget is passed. This froze spending of every ministry and state institution at 2005 levels (LL10 trillion, or around $6.6 billion), ignorant of both changing needs and inflation.

Shortly after adopting the provisional-twelfth rule ad infinitum, Lebanon found itself at war, and 2006 ended without a budget to cover that year nor the year to come. To cover spending beyond what was allocated in 2005, the government turned to the treasury, drawing advances to pay for the spending it said it needed. When spending allocations became insufficient, the government transferred money from budget reserves and added allocations through treasury advances. These were made legal by government decrees and approved by Parliament.

In 2012, tactics changed. With 2005 getting further in the rearview mirror, Parliament began passing laws raising the 2005 spending cap instead of having the government rely only on treasury advances to meet increased needs. There were at least five extrabudgetary laws passed, adding LL12 trillion to the 2005 spending level.

We do not know how much money was channeled through each of these three mechanisms, but we do know how much in total was spent. Every month, the Ministry of Finance publishes its Public Finance Monitor (PFM), which, among other indicators, gives a total amount of spending for the month. (The PFM does not breakdown spending by institution, but by type of expenditure, for example, current or capital). Adding the figures from 2006 to 2016 (the full figures for 2017 are not yet available) shows that the government spent LL206 trillion ($130 billion) in total.

We also know, in general, where public money goes. A significant amount goes to debt servicing; another sum to operations such as paying salaries and pensions for public sector workers and security forces; a third chunk goes to social expenditures, for example as subsidies to the Ministry of Public Health; and a fourth to subsidize Electricite du Liban. What’s left is available for investments and other expenses.

What we do not know about the $130 billion in public spending between 2006 and 2016 is whether the numbers are inflated. There have been allegations in the past of ghost-staffing at different ministries, just as there have been allegations of bloated contracts. We also cannot say if any of the LL140 trillion ($93 billion) in collected revenues over the same period were mismanaged. These answers will only come from an audit of the books, which in the words of Alain Bifani at the finance ministry are not yet fully tallied, and are definitely not publicly available.