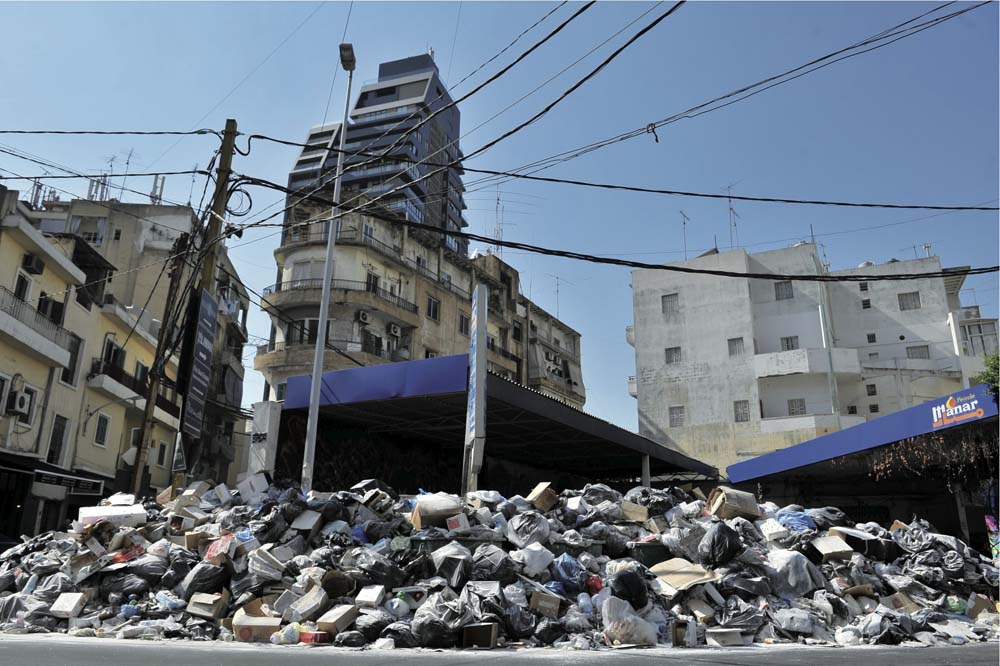 Agriculture Minister Akram Chehayeb’s waste management strategy is the equivalent of the central government finally throwing up its hands after years of writing plans it could never implement and telling municipalities, “Fine, you deal with your garbage.” For most of the country, this is not exactly a deviation from the status quo. Outside of Beirut and most of Mount Lebanon (excluding the Jbeil district) – municipalities have been dealing with their own trash. Many have done a very bad job from an environmental and public health perspective. While the country has a 99 percent waste collection rate, some 26 percent of its refuse was open dumped or burned prior to the July 17 closing of Lebanon’s largest sanitary landfill near Naameh, when that percentage substantially increased. An expert who helped draft Chehayeb’s plan – which was written in four days – explains that municipalities will be given training on best international practice, cash to sign contracts for waste solutions and help to write tender documents in preparation for those contracts. When it comes to finding locations for waste treatment and disposal facilities – the barrier that has prevented implementation of modern trash solutions for decades – the expert says “the municipalities will have to decide.”

Back to the drawing board

Since the end of the civil war, Lebanon has not been able to fully implement a single waste management plan. Even the 1997 emergency plan for Beirut and Mount Lebanon – resulting in contracts between the state and Averda companies Sukleen (collection) and Sukomi (treatment and disposal) – was only partially implemented. Sukomi was supposed to receive land to build two composting plants in order to divert 850 tons of organic waste per day from the Naameh landfill. Instead, land was only provided for one, meaning the amount of organics sorted out of the service area’s waste stream stood at 300 tons per day. The emergency plan was clearly not meant to last forever. According to a 2001 report commissioned by the Ministry of Environment, new tender documents for waste collection in the service area were prepared in either 2000 or 2001 – the report is unclear. The report notes, “tender invitations were issued but subsequently aborted as only two bids were received.” During this same time period, the rest of the country was left to deal with its waste however it could. A 2010 report, again commissioned by the Ministry of Environment, notes “austerity measures by the [government] have prevented many municipalities [from planning for and investing in] proper solid waste systems. They typically receive their budgetary allowances from the Independent Municipal Fund (IMF) several years behind schedule and therefore tend to resort to quick solutions and fixes, including open dumping.” Uncontrolled dumping and trash burning pre-dates the war and has never been properly addressed. Between 2003 and 2013, however, four plans were developed to provide nation-wide waste management solutions. None have gone into effect.

When then Prime Minister Najib Mikati resigned in March 2013, there was plenty of unfinished work left behind, including the need to approve a national waste plan focused on building incinerators to turn waste into energy. Eleven months later, a new government was in place and, in short order, a new ministerial committee was tasked with writing yet another waste management plan. Unlike before, however, Prime Minister Tammam Salam’s cabinet this time promised to close the Naameh landfill for good – meaning that to avert a national trash catastrophe, a solution would have to be in place before the scheduled January 2015 closure. The committee was initially due to announce its plan in April 2014. It did not. Minister of Environment Mohammad Machnouk has ignored Executive’s interview requests for the past two months, so the magazine is not sure exactly when the first plan of 2015 was written and agreed to by the committee. However, in March Executive outlined some of the plan’s details based on an interview with Bassam Farhat from the Council for Development and Reconstruction (CDR). It called for contracting waste management across the country to private companies. The government cancelled the plan in August and is now trying to sell residents and local officials yet another strategy. An expert who helped write the plan – which, as noted above, was done in four days – briefed Executive on its contents on condition of anonymity. Below is a look at how the two compare, referring to the cancelled plan as Plan A and Chehayeb’s strategy as Plan B:

Plan A envisioned dividing Lebanon into six service areas, with contractors responsible for deciding how to treat and dispose of waste. The private service providers would have also been required to secure the land needed for facilities (a significant barrier to implementation for previous nation-wide plans, which failed because no one wants to live near said facilities, according to the Ministry of Environment). Decisions about treatment and disposal options were also left to the service providers, with the caveat that only 40 percent of the service area’s waste could be landfilled in the first three years of the seven-year contract, while only 25 percent could be landfilled in the remaining years.

Plan B allows municipalities and municipal unions to agree on their own service areas without central government intervention. The expert explains that once local governments group together into service areas, they would then have to choose how to treat and dispose of the waste in their area. Local governments have the power to decide on how to implement their own visions (i.e., deciding how much private sector involvement to have in trash collection as well as building, operating and maintaining treatment and disposal facilities). The central government would not dictate if or how landfills fit into the mix nor would it have a role in choosing the sites for waste facilities. That all said, the expert notes that if some municipalities refuse to be part of a service area and do not want to handle their own waste, they can appeal to the central government to do it for them.

Plan A demanded service providers have solutions in place within six months of the contracts being signed. Representatives of two of the six companies that won contracts told Executive this would have been a challenge, but each were confident they could meet the criteria, even if their own plans would have had to be implemented in stages (i.e., finding temporary solutions until finalizing construction of treatment facilities that need more time to be built).

Plan B, the expert says, sees new waste management solutions built and operational 18 months from “day zero” – or the date on which the plan gets implemented. At the time of writing, Chehayeb was saying that implementation would hopefully happen soon. Between day zero and full authority by municipalities over waste management, multiple things should happen, according to the expert. First, Naameh will re-open for seven days to receive all recoverable garbage that has piled up in Beirut and most of Mount Lebanon since July 17. Next, the government will cancel two contracts with Sukomi – one covering waste sorting (recycling and composting) and the second for waste disposal (transport to Naameh) – while keeping Sukleen’s collection contract valid for 18 months. During this interim period, waste that is to be recycled, composted or sent to Naameh will be spread across the country (not literally). 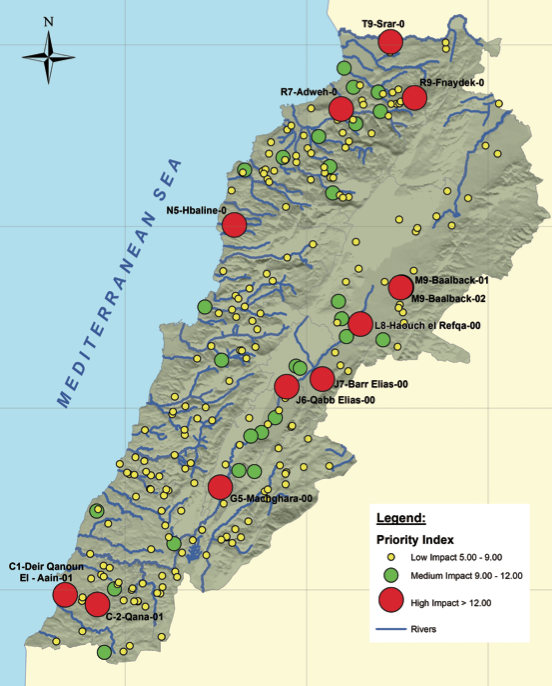 As for what happens to Beirut and most of Mount Lebanon’s garbage for 18 months, 1,500 tons per day are planned to be sent to Srar, a village near Lebanon’s northern border with Syria in the Akkar district in the first six months. The expert says there is already an open dump there “receiving around 350 to 400 tons per day from different areas [in] Akkar [but also] from Koura and Batroun.” He says that at the foot of that dump, the plan calls for building a 10,000 square meter sanitary cell for the new waste, which will take two to three months. In the short term, the expert says, ground will be prepared with a sanitary liner to store new waste until the sanitary cell is operational. The fate of the other 1,500 tons is unclear. Days before Chehayeb publicly ruled out one potential site near Masnaa, on Lebanon’s eastern border with Syria, the expert explained that the location is unsuitable due to a shallow aquifer below. While he says he thinks he knows where the second temporary site will be, he declines to publicly name it until a deal with local officials can be struck. The expert says Saida’s mayor also agreed to take 200 tons per day for treatment but notes the mayor later added a demand for a sanitary landfill before taking any more waste. An existing, privately operated treatment plant on the southern coast would welcome the added throughput, Executive reported last month. It is unclear how the government will respond to the mayor’s request. Finally, during the first third of Plan B’s 18-month temporary phase, the expert says the long-closed Bourj Hammoud dump will be rehabilitated similar to how Saida’s waste mountain was razed – build a breakwater in the sea, dump the old trash into it, use the old landfill space as a new, sanitary landfill and, after 12 months, close both and use them as reclaimed green space in the future.

Plan A’s announced costs caused such an uproar that the government cancelled its plans to sign contracts with private companies for a national waste plan.

[pullquote]If and when Chehayeb’s plan is implemented, the expert agrees there is no shortage of challenges[/pullquote]

Plan B’s long-term solutions, the expert says, will be funded by municipalities based on the plans they choose, so no cost estimate is available. That said, the 18-month temporary phase of the plan is expected to cost $153 million, the expert says. That money will come from cancelling Sukomi’s treatment contract, meaning that the company was being paid $100 million per year for recycling and composting, despite the fact that around 80 percent of the waste collected by sister company Sukleen was landfilled. As noted, Sukleen’s collection contract would remain in place during this phase, and Sukomi would be paid to transport waste to the temporary dumpsites. The expert did not have an estimated cost for trucking garbage to diverse points around the country, but notes it is included in the total $153 million price tag for the 18-month phase. That total, however, is not inclusive of potential cost overruns, and the coincidence of savings from cancelling Sukomi’s contracts almost exactly matching the plan’s price seems perhaps too convenient.

Plan A left treatment decisions (recycling, incineration, composting, etc.) up to private service providers. Those plans were revealed to policy makers in the bids, but never made public.

Plan B leaves long-term treatment decisions up to municipalities. As noted, however, the recycling and composting Sukomi was doing will be halted during the 18-month temporary phase of the plan. The expert says that European Union money delivered to Lebanon to be used, in part, to convert the Srar open dump into a sanitary landfill can be re-purposed instead to build recycling and composting facilities in Akkar, but this is not guaranteed.

If and when Chehayeb’s plan is implemented, the expert agrees there is no shortage of challenges – getting municipalities to work together in service areas and choosing treatment and disposal sites being the largest barriers. “The plan is not trouble-free,” the expert admits. “The transition period is very difficult and the sustainable part might lead to some failures in some areas and successes in others.”