Home Economics & Policy2018 Budget Better to have than to have not

Better to have than to have not

A legal challenge of the 2018 budget law taken to the Constitutional Council, Lebanon’s highest court, threatened to cancel what was the country’s second state budget passed in the last six months, on the back of no budget at all for almost 12 years. Parliament ratified the 2018 budget without approving an audit of public finances, amounting to a violation of the constitution the court says, and inserted clauses to the law that the court deemed non-essential to budgetary matters.

In total, the court struck seven articles from the budget law and rebuked Parliament for its lack of oversight on government spending and collection, saying that by not approving an audit, they had left the door open to corruption. Given the weaknesses in Lebanon’s economy and the challenges facing the state’s coffers, however, the court decided against annulling the law in its entirety—instead ruling that it is better to have a budget than not.

The budget projects an overall spending reduction of nearly $9 million to $15.85 billion (LL23.89 trillion)—down 0.06 percent from the previous fiscal year, as Executive reported last month. As for revenue, the budget estimates $12.4 billion (LL18.6 trillion) for 2018. About 77 percent of this will come from tax collection, $9.5 billion—(LL14.3 trillion)—with the remainder projected to be raised from non-tax revenues and the profits of state-owned enterprises and public institutions—$3 billion in total (LL4.5 trillion).

Government revenue has fluctuated over the past several years, according to figures published in the Public Finance Monitor (PFM) by the Ministry of Finance. In 2014 the government raked in $10.9 billion (LL16.4 trillion) before dipping to $9.6 billion (LL14.4 trillion) the following year, and rebounding to $10 billion (LL15 trillion) in 2016. PFM has not yet published full-year figures for 2017, but revenue estimates in the 2017 budget law came to $10.7 billion (LL16.2 trillion). 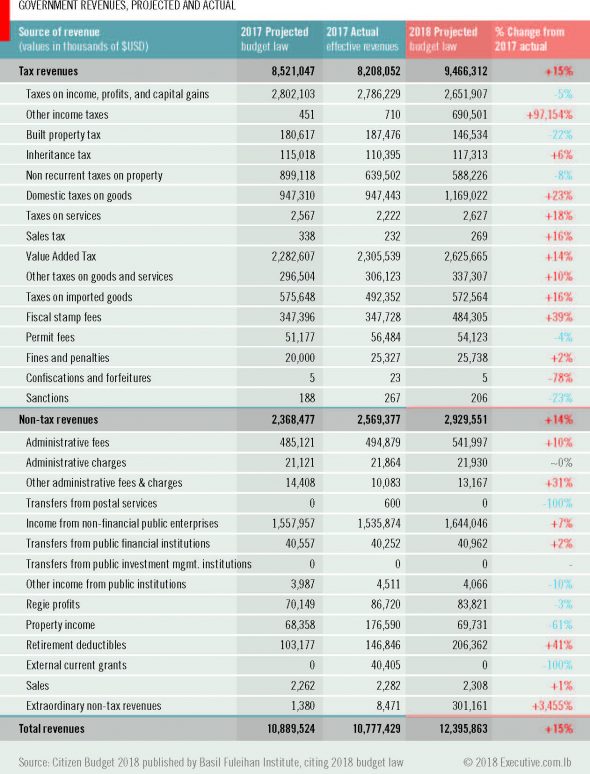 Marwan Khatib, a senior associate at Kabalan & Associates law firm, says the budget law does much more than just authorize the government to spend money and collect revenues.  The law includes incentives for taxpayers to settle their dues and over the long-term might allow the government to improve tax collection rates and strengthen the overall public finance situation.

Article 55 of the law reduces customs duties and excise taxes on imported hybrid and electric vehicles. The new rule limits customs duties on hybrid vehicles qualified as personal use automobiles to 20 percent regardless of the value, and to 10 percent if intended for public use. Electric vehicles, meanwhile, will be fully exempted from customs duties. Owners of both types of vehicles will not pay registration and are exempt from their first “Mechanique” fee. Previously, vehicle purchases were levied customs duties at 20 percent for all vehicles valued at $13,300 (LL20 million) or below, and 50 percent on vehicles worth over $13,300.

Article 13 allows a treasury advance to Electricité du Liban (EDL) of nearly $1.4 billion (LL2.1 trillion) to cover the cost of fuel purchases, estimated to reach $1.38 billion (LL2086 billion), and to cover interest and loans which are projected to amount to  $9.3 million (LL14 billion). The article also states that EDL, with the Ministry of Finance and Ministry of Energy and Water, have six months from the date of publication of the budget law to come up with a mechanism to reimburse the treasury for the advance.

Article 15 delays capital expenditures on and maintenance allocations for state infrastructure by a year. Investments in infrastructure advocated by the article include: maintenance of buildings at the Lebanese University; increasing the capacity of drinking water delivery around the country; improving irrigation and sewage; construction of a tourist port in Jounieh; enlarging and maintaining the road from Sultana to Saida, and from Kfar Remen to Marjaayoun; removing landmines in the south; modernizing the Army’s IT department, as well as construction and maintenance of facilities and equipment; improving  school buildings, furniture and supplies; and upgrading and expanding the country’s fixed telephone line network. 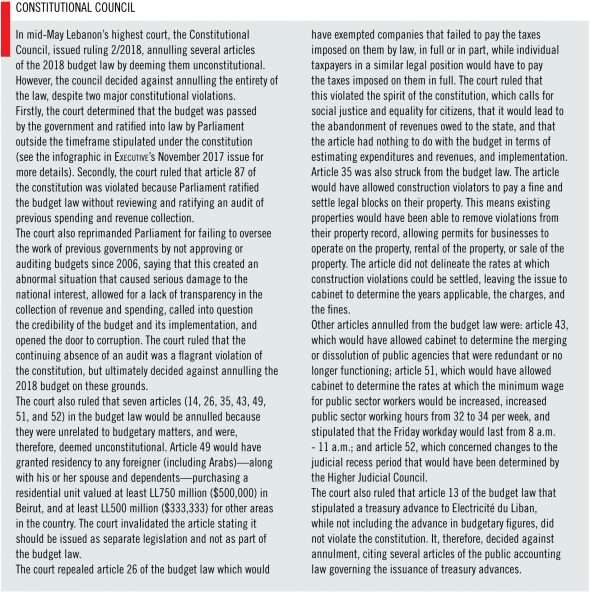 Khatib added that many of the articles in the budget law 2018 may be crucial to the operation of government. Article 17, for example, decreased fines on taxpayers behind on their bills by up to 90 percent, providing an incentive for them to settle their unpaid tax bills by paying only a 10 percent fine instead of the full amount owed. This decrease will apply to delayed Mechanique fees, municipality fees, and NSSF contributions. Khatib suggested many taxpayers who had previously not paid in full may now pay up given the lower penalty, allowing the government to collect higher amounts in revenue than it otherwise would. Another example that Khatib points out is article 29, which updated property taxes applicable at different rates dependent on buildings constructed after September 1962. He also highlighted article 38, which amends fees for passports. A one-year passport now costs $40 (LL60,000), a five-year passport costs $200 (LL300,000), and 10-year passport costs $332 (LL 500,000). The Constitutional Council also struck down article 26 of the budget law, which would have offered waivers for companies behind on their tax bill, stating that it violated the spirit of the constitution, among other reasons.

In April, the Ministry of Finance published a document titled “Citizen Budget 2018,” offering greater transparency of high-level public finance figures that were previously buried in the budget law published in the Official Gazette (which, in mid-May, was put behind a paywall). A letter addressed to Executive and signed by the Minister of Finance, Ali Hassan Khalil, stated that the ministry “has pledged, as of this year, to regularly publish the Citizen Budget, in parallel with the adoption of subsequent budgets in the coming years, making it a permanent and ongoing tradition.” Inshallah.