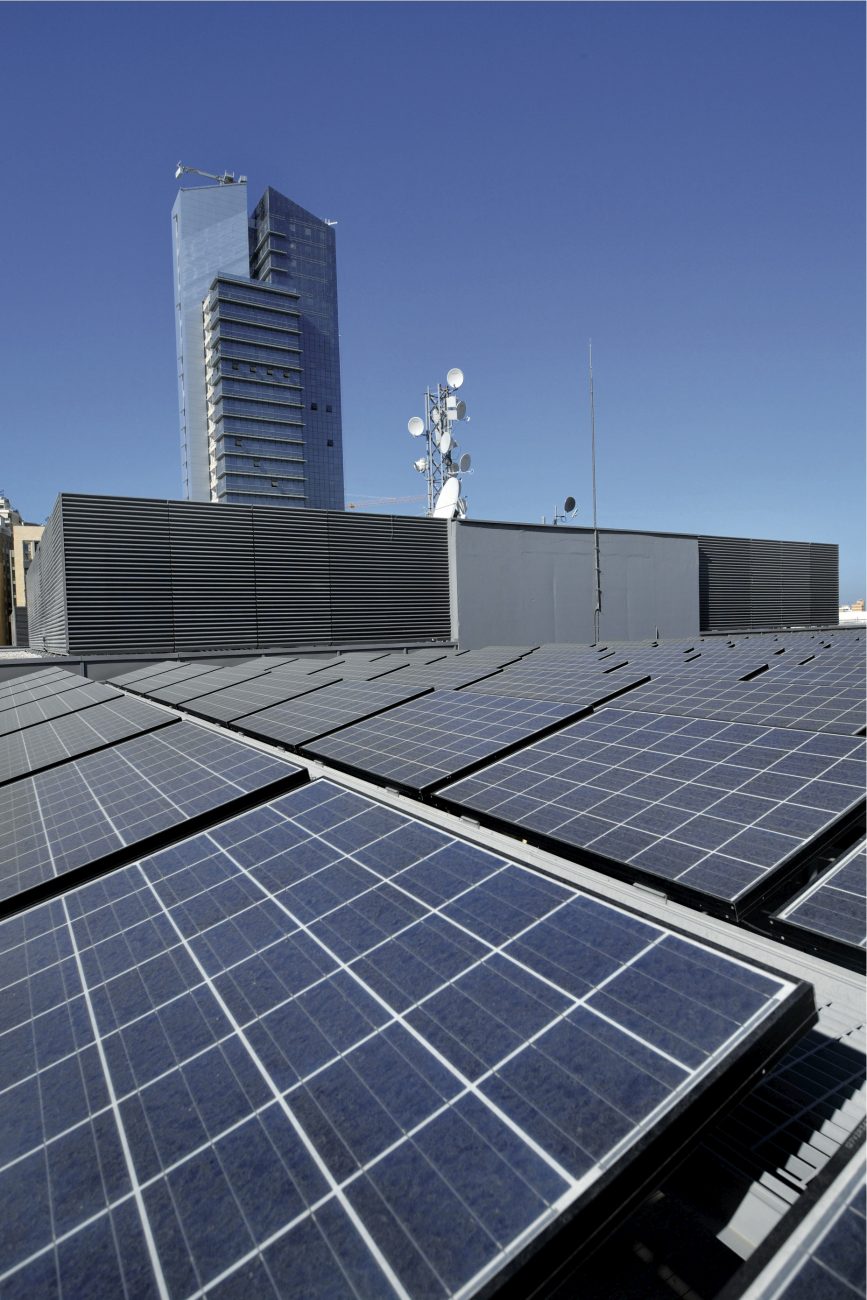 Lebanon’s commitment to combating or mitigating climate change culminated in December 2015 when Lebanon became a signatory to the Paris Agreement at the United Nations Climate Change Conference (COP21). Lebanon committed to reducing its greenhouse gas emissions by at least 15 percent by 2030 and up to 30 percent conditional upon the provision of international support. This high-level commitment toward a better climate is being converted into action through strategic governmental projects.

Before discussing these initiatives, it is vital to visit the UN’s 17 Sustainable Development Goals (SDGs), which were adopted by world leaders in September 2015, pledging worldwide action amongst governments, businesses, and civil society to end poverty and to create a life of dignity and opportunity for all by the year 2030. Goal 7 of the SDGs, Affordable and Clean Energy, ensures reliable, sustainable, and modern energy for all, while Goal 13, Climate Action, presents solutions to climate change.

How has Lebanon positively contributed to COP21 while remaining consistent with SDGs 7 and 13?

To ensure access to affordable, reliable, sustainable, and modern energy, the Lebanese Ministry of Energy and Water (MoEW) published an energy policy paper in 2010 laying out solutions for electricity in Lebanon; a sector facing up to a 40 percent gap between supply and demand. The policy paper considered a 12 percent commitment for renewable energy by the year 2020. This commitment was put forward at the Copenhagen Summit (COP15), and is projected to reach 15-20 percent by the year 2030.

The National Renewable Energy Action Plans for the Republic of Lebanon (NREAP) 2016-2020 offers a detailed description of the different renewable energy technologies to be developed in Lebanon to meet the 2020 and 2030 commitments of 12 percent and 15 percent respectively, while emphasizing the target of each technology, the financial assessment, and the required budget to keep the plan going. The NREAP’s agenda for 2020 includes: 200 megawatts (MW) of wind energy, 150 MW of solar photovoltaic farms, 100 MW of decentralized solar photovoltaic generation, 50 MW of concentrated solar power, 686 gigawatt-hours (GWh) from solar water heaters, 332 MW of hydroelectricity, 1.3 MW of geothermal energy, and 772 GWh from bioenergy. Lebanon’s demand for electricity reached a peak of 3,460 MW during the summer of 2017, while the power plants’ supply peaked at 2,160 MW.

With these targets set, Lebanon’s progress toward its climate pledge has been solid. It is anticipated that the cabinet and Électricité du Liban (EDL), in partnership with the private sector, will soon build and operate 200 MW worth of wind energy in the Akkar governorate. In addition, the MoEW launched a Call for Expression of Interest in January 2017 aiming to build up to 180 MW of solar photovoltaic farms in Lebanon. These two initiatives would constitute major milestones in meeting the 2020 targets. This was followed by a massive Call for Expression of Interest (estimated $1.5 billion) in March 2018 for 1. Wind energy (200-400 MW capacity), 2. Solar PV farms (24 farms, 10-15 MW each), 3. PV farms with storage (3 farms, 70-100 MW each, with 70MW/70MWh storage), and 4. Hydropower (300 MW).

In terms of decentralized solar photovoltaic electricity generation, Lebanon has been witnessing triple-digit growth rates for four consecutive years with an installed capacity of 23 MW at the end of 2016.

With the government’s plans for the renewable energy sector along with the private sector’s initiatives, Lebanon stands in agreement with Goal 7 of the SDGs.

While Goal 7 helps reduce Lebanon’s contribution to climate change by introducing renewable energy sources, Goal 13 of the SDGs aims at taking urgent action to tackle climate change and its impacts.

With support from the UNDP, the MoEW has completed several assessments that look at climate change impacts. Historical records of the early 20th century indicate unprecedented high temperatures with an expected warming of 1.7 degrees Celcius by mid-century and of 3.2 ºC by 2100. Also, a decrease in precipitation ranging between 4 and 11 percent with drier conditions is projected by the end of the 21st century (up to 5.8 mm decrease in average monthly precipitation).

Projections for the end of the 21st century confirm a rise in the number of days with temperatures higher than 35 ºC, and an increase in the number of consecutive dry days whenever precipitation reaches below 1 mm. These alterations will produce seasonal prolongation and geographical expansion of drought periods.

This combination of significantly less wet and substantially warmer conditions will result in hotter and drier climate. This switch will bring a reduction in the snow cover by an estimated 40-70 percent (an essential source of water and an important tourism sector) with an expected 2-4 ºC rise in temperature. Less precipitation will fall as snow, with snow that currently falls at 1,500 meters shifting to 1,700 by 2050, and to 1,900 by 2090. This will also be coupled with reduced snow residence time from 110 days to 45 days. Snow will melt earlier in the spring. These changes will affect the recharge of most springs, reduce the supply of water available for irrigation during the summer, and increase winter floods by up to 30 percent. This will have adverse impacts on rivers and groundwater recharge and will affect water availability during the summer season and in drought periods.

The decline in precipitation levels will also exacerbate existing challenges to water availability for agricultural (reduced productivity), commercial, and residential uses. Forest fires will be more common and extreme weather events will be more severe, causing damage to infrastructure.

The above-listed impacts are expected to cost the government $610 million in 2020 and $44.3 billion in 2080 from direct damage (storms, floods, drought) and forgone GDP (expected reduction of 3 percent  GDP in 2020 rising to 32 percent  of GDP in 2080). What is even more alarming is the fact that households will also incur costs which are projected to reach $1,500 in 2020 and increase to $107,200 in 2080, with a higher burden on rural households. A greater risk is that of the damage inflicted on individuals’ health. Costs associated with potential increases in the risk of death as a result of heat stress, malnutrition, diarrhea, malaria, floods, and cardiovascular disease are estimated to total $47.2 billion by 2020. In tandem, costs associated with potential increases in illness and disabilities—from the same climate-related factors are projected to amount to $177.9 billion by the same year.

The decrease in agricultural production will knock around $300 million off Lebanon’s GDP by the year 2020. In addition, the expected climate change impacts on global food prices will burden Lebanese consumers with an additional $470 million of costs. Considering the above, Lebanon has produced various strategies and plans, some of which are sector-specific actions that aid in strengthening the adaptive capacity of the country and decrease its vulnerability to climate change. The plans in action include the national biodiversity strategy, the national water sector strategy, the national forest program, the Ministry of Agriculture strategy, the land degradation and desertification action plan, the strategy on health and the environment, and the Paris Pact on water and adaptation. In addition, two water harvesting guidelines have been laid out for the country: one from agriculture greenhouse rooftops and the second from built structures.

In its Intended Nationally Determined Contributions (INDCs), Lebanon has set ambitious mitigation goals with clear sector specific objectives, along with clear indicative adaptation goals. As a matter of fact, strategies and policies subject to modifications will have to meet the national plan; the UNDP will continue to assist the Lebanese government in securing clear directions on the various approaches to be implemented to reduce impacts of climate change and to increase resilience of its most vulnerable sectors.

To facilitate cost-effective deployment of renewable energy technologies in Lebanon, and thus assist the government in meeting its international pledges, the UNDP has commissioned a study on how to reduce the “risks” perceived by the investors. This in turn is an action plan for the government in moving renewable energy forward. These could include instruments, such as well-designed power market regulations, which reduce risk by removing the underlying barriers that create it; financial derisking instruments, such as loan guarantees offered by development or central banks, which transfer risk from the private to the public sector; and financial incentives, such as direct subsidies for sustainable energy, which compensate investors for risk. The outlined action plan was endorsed by the MoEW. Meanwhile, the UNDP along with the MoEW and EDL, prepared the Solar PV and Wind Grid Code of Lebanon—which serves as one of the derisking measures, and when implemented by EDL will allow a larger update of renewable energy sources onto the electricity grid. The ball is in the court of the government, which, armed with the above tools, should follow their implementation to reach its national and international obligations.