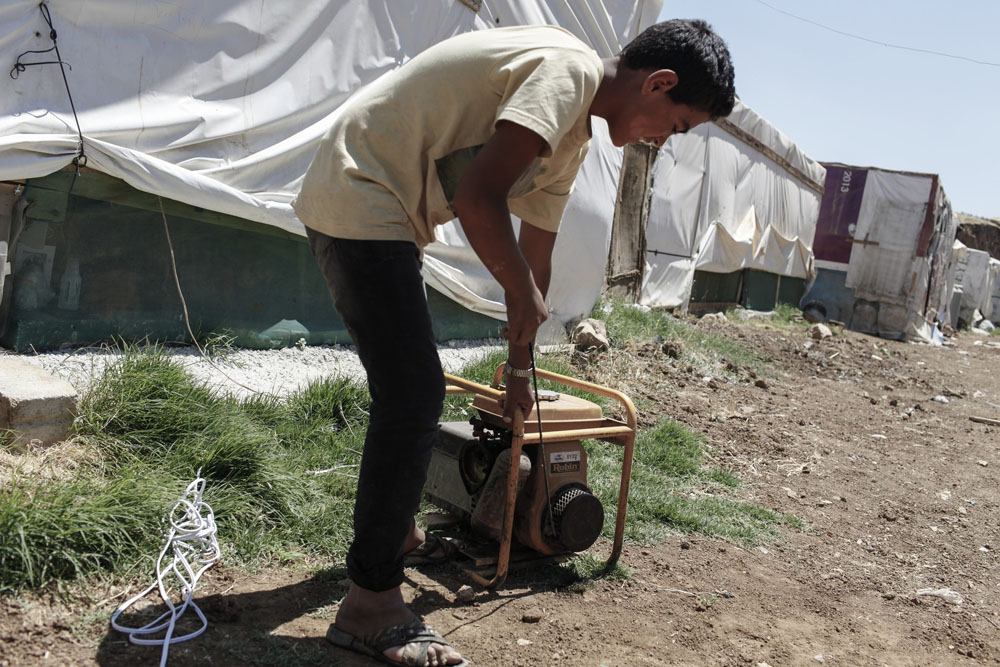 The proportion of Syrian refugees who are food secure has fallen from 32 percent in 2013 to 11 percent in 2015. In this photo, taken in 2014, Ahmed, 15, from Raqqa starts a generator to provide electricity for his family's tent in an encampment for refugees in Lebanon's Bekaa Valley. Lack of power makes it impossible to keep food in such circumstances. European Commission | Flickr | CC BY-SA 2.0
Reading Time: 3 minutes

There is an old Lebanese saying for reassurance in troubled times. For years, comparatively well-off people have told others, especially children, that ‘ma fi hadan bimout min el jou’’ (no one dies of hunger) when they complain excessively. While that may be true for some, five years of a refugee crisis coupled with long-standing structural issues are threatening that age-old adage and the confidence that buoys it.

Food security exists when all people, at all times, have physical and economic access to sufficient, safe and nutritious food that meets their dietary needs and food preferences for an active and healthy life. People may not know it, but Lebanon has entered a new phase of food insecurity and, while malnutrition is not yet a problem, food security has been falling across the country. According to the latest figures from the United Nations, the proportion of Syrian refugees who are food secure has fallen from 32 percent in 2013 to 11 percent in 2015. Out of an estimated 1.5 million Syrian refugees in the country, only 165,000 have stable access to nutritious food.

With poverty rates increasing from around 28 percent in 2004-2005 to around 32 percent by 2013, according to several estimates cited last month by the World Bank Group, there are indications that the Lebanese are also becoming more food insecure. The latest figures from the UN Food and Agriculture Organization show that around 11 percent now cannot access their basic food consumption needs, 31 percent do not have access to healthy food and 49 percent are worried they will not have enough food to feed themselves over the course of the year.

Of course, one only needs to walk into the supermarket to understand why this is happening. In 2008, food inflation rose 18.1 percent. From 2008 to 2013 food prices rose some 45 percent. Obviously this looks bad for a government who is supposed to protect the food security of the country. But instead of using their authority to regulate food prices or creating more job opportunities, the government re-indexed inflation in December 2013 and voila, they now claim that inflation (and food inflation) is in negative territory and prices are falling.

To be fair, global food prices fell by 0.95 percent in 2014 and 0.64 percent in 2015, but that is also related to today’s low oil prices, the relatively strong dollar and stunted economic growth, all of which bode well for inflation. Prices are sticky for the same reason they have always been; we live in a country where price fixing and oligopolies are rife and there is no national economic vision.

Government subsidies on bread production have already proven ineffective and disproportionately beneficial to those with more income, not the poor who need the most support. Lebanon also never really benefited from the fruits of free trade because the World Trade Organization accession was halted once oligopolists realized obligatory competition regulation would run contrary to the moneyed interests that keep prices up and wages stagnant. At the same time, Lebanon threw open its doors to foreign food imports through both bilateral and multilateral trade agreements. Now we are up to 80 percent import dependent for our food, while our agricultural sector is in retreat.

Being physically able to bring in more food over the past years allowed our country to adapt to more than 1.5 million new mouths to feed. Yet, as those mouths become more food insecure and food aid dependent, the government also restricts them from working or possessing assets that can help them feed themselves. Restricting refugee labor is considered a sound policy to the extent that it can protect employment opportunities for unemployed Lebanese citizens. However, requiring refugees to abandon their refugee status and become sponsored migrant workers to perform menial jobs is a narrow-minded and zero-sum proposition when those restrictions increase food insecurity.

Instead of forcing Syrian refugees into informal labor and exposing them to abuse, a more intelligent and humane policy would be to allow them to work alongside Lebanese in agriculture. Permitting refugees to own assets that are used in agricultural production would strengthen food security in the country and produce more jobs for everyone. At the same time, Lebanon needs to stop being complacent about food security. The government must devise an integrated Food and Nutrition Security Strategy which rationalizes trade, market and production against resources and actually implement it.

Lebanon cannot wait for another food price shock to compel the government to act. People have already started to go hungry, and soon they may turn angry.