They may be frozen, but now we can list our new taxes

After deliberating for much of 2017, Parliament met in late July to ratify new taxes. The legislation then sat on the desk of President of the Republic Michel Aoun for nearly a month, while he contemplated whether or not to sign the taxes into law. In late August, he finally inked his name, briefly ending a period of public uncertainty and frustration around lawmakers waffling on the issue. But, adding a fresh layer of confusion, as Executive went to print the Constitutional Council issued a freeze on the tax hike pending further review.

The measures had, when first announced in the opening months of this year, led to street protests against a hike. Throughout the year, there was much confusion over which new taxes would be introduced or increased, how much more people and businesses would have to pay, when the new measures would enter into force, and what the revenues would actually be used for. It did not help that conflicting narratives from both  sides of the aisle skewed the public conversation, confusing — intentionally or not — the details of the taxes and necessity of the measures. In an effort to make sense of the discourse at the time, Executive reported in April that opaque decision making made for confused tax policy.

Public perception then was that the new taxes would pay for a salary increase for public sector workers, but that is not accurate, as Director General of the Ministry of Finance Alain Bifani pointed out more than once and reiterated in an interview with Executive (see page 44). The legislation does not allocate the added revenue that the new taxes would generate. Instead, that money will head to the treasury toward covering the deficit. Deficit spending is set to increase because of the salary increase estimated at $1.2 billion — a figure that could grow or not depending on public sector recruitment — and that  new spending needed to be covered by revenue that did not exist, hence taxes. So yes, it is true that the new spending is correlated to the new taxes, but the new revenue is not specifically allocated to pay for the wage increase.

According to the Ministry of Finance all taxation money is fungible and not tied to a specific purpose. That is the principle. This principle is practically invisible to the public, and has not been properly explained by MP’s and ministers. It also seems that some members of the Lebanese Parliament might not know the term fungible, or have little understanding of taxation, so even they have linked the new taxes to the salary scale. But the reality is that these taxes are not designed for paying the wage scale increase, but for filling a hole (the deficit), which is being made bigger by the wage increase.

For much of the year, the government did little to correct this narrative with the general public. Since  the new taxes were announced, Executive has sought to understand their mechanics, and though the topic had come up in a March interview with the Ministry of Finance, the answer then was that the ministry was not yet in a position to detail the proposed taxes.

All but two of the new taxes (see box list of taxes) entered into effect immediately upon publication of the legislation in the Official Gazette on August 21, 2017 — though are now frozen. 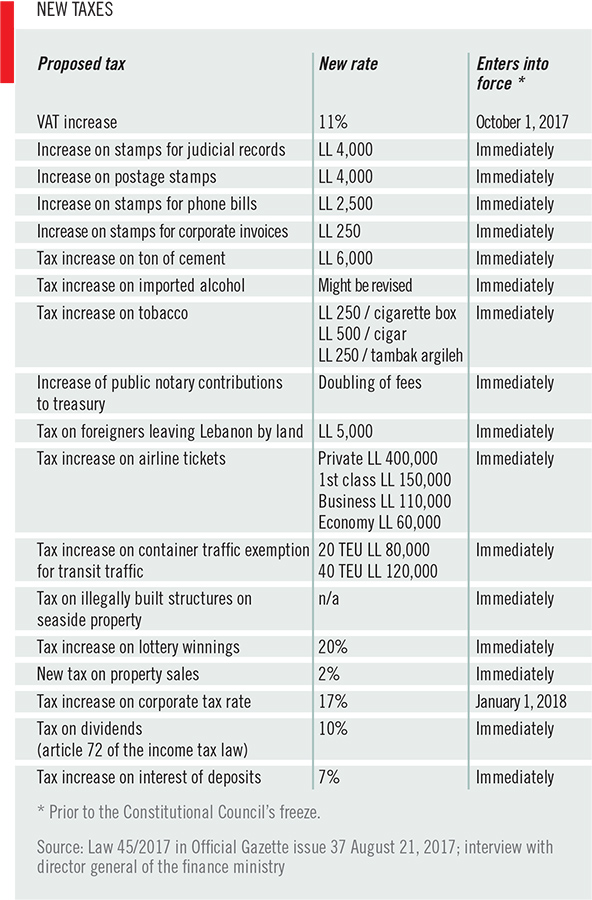 An increase of the Value Added Tax (VAT) to 11 percent will not take effect until the start of the fourth fiscal quarter of the year, October 1, the law reads. The rate at which corporations will be taxed was increased to 17 percent to be applied at the start of next year, January 1, 2018.