Lebanon will finally be rescued from the electricity cuts it has long suffered from, or so says the government as it trumpets its latest plan for the sector. Eight years ago, Electricité du Liban (EDL) supplied, on average, only 18 hours of electricity per day, and an ambitious plan from 2010 did not accomplish much in terms of reducing the country’s shortfall in generated electricity. It did employ short-term measures, like leasing electricity barges, refurbishing existing power plants, and constructing small-scale renewables, all of which slightly boosted the electricity supply. The latest proposal looks like it will, again, emphasize short-term measures, but the government has so far avoided detailing the plan to the public.

At the end of March, Cabinet heard the electricity plan. According to minutes from a meeting that took place, Lebanon’s Minister of Energy and Water Cesar Abi Khalil presented the plan to the cabinet, which agreed to it in principle, permitting him to publicly announce the plan the following week in early April.

But Melhem Riachy, the Minister of Information, told reporters after the March cabinet meeting that ministers had made many comments on the plan, which would  be kept secret, and that the plan would be implemented in a completely transparent way after it was ratified.

Executive requested an interview with the Ministry of Energy and Water (MoEW)  but did not receive a response. A source at the ministry, who did not want to be named, wrote to Executive in an email at the beginning of April that details of the plan could not be discussed because there were several issues yet to be resolved. The source would not explain what those issues were and  could not give a timeframe for the finalizing of the plan’s details.

The plan, in general, calls for measures to bridge the gap between the supply of electricity and consumption, according to a draft that a separate ministry source, who also did not want to be named, confirmed to Executive as authentic but outdated (it was dated March 24, 2017). In the short-term, the plan will call for new generation capacity by leasing new barges. Over the long-term, the focus will shift toward constructing new power plants, and a switch from fuel oil to natural gas for power generation. 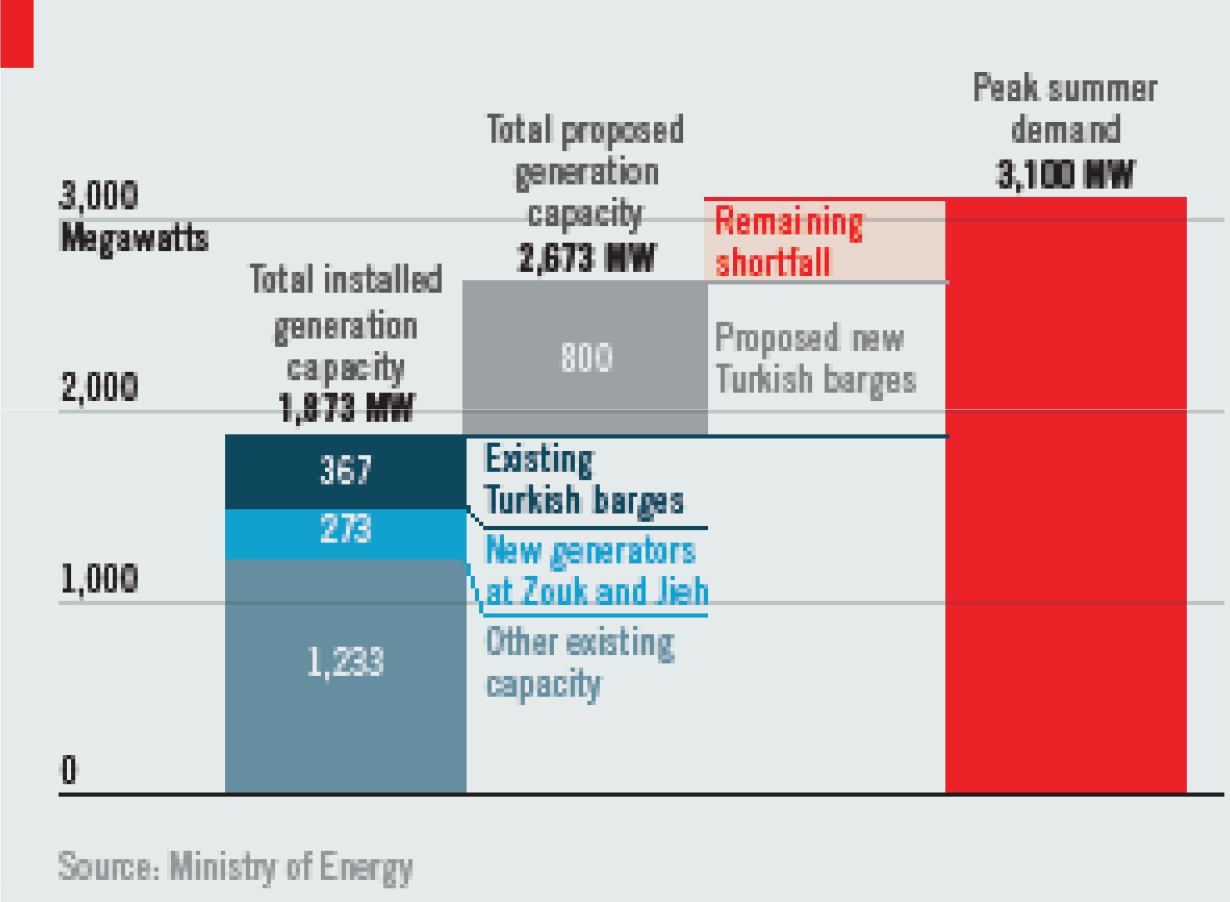 Lebanon, by the end of 2016, had a total generating capacity of 1,873 megawatts (MW). The figure includes megawatts from two Turkish barges that connected to Lebanon’s electricity grid in 2013, and from new reciprocating generators installed at the Jiyeh and Zouk power plants in 2016.

Last summer, peak demand reached 3,100 MW. The government wants to increase the supply of electricity by leasing new barges, according to the draft plan, as a short-term measure to meet this summer’s electricity needs.

In early April, the ministry did publish a tender for two new electricity barges that would generate between 800 to 1000 MW, but bidding was postponed, according to a report in Al Akhbar.

The new electricity barges that the government might rent are meant as short-term measures that could turn into long-term. The government wants to lease those barges to meet Lebanon’s electricity demands, while it builds new power plants that it hopes to power with natural gas or renewables.

According to the draft plan, the government wants to partner with the private sector to build new power plants through a modality known as Independent Power Producers (IPP), where companies would own the power plant and sell the generated electricity to the public or Lebanon’s utility, Electricité du Liban. 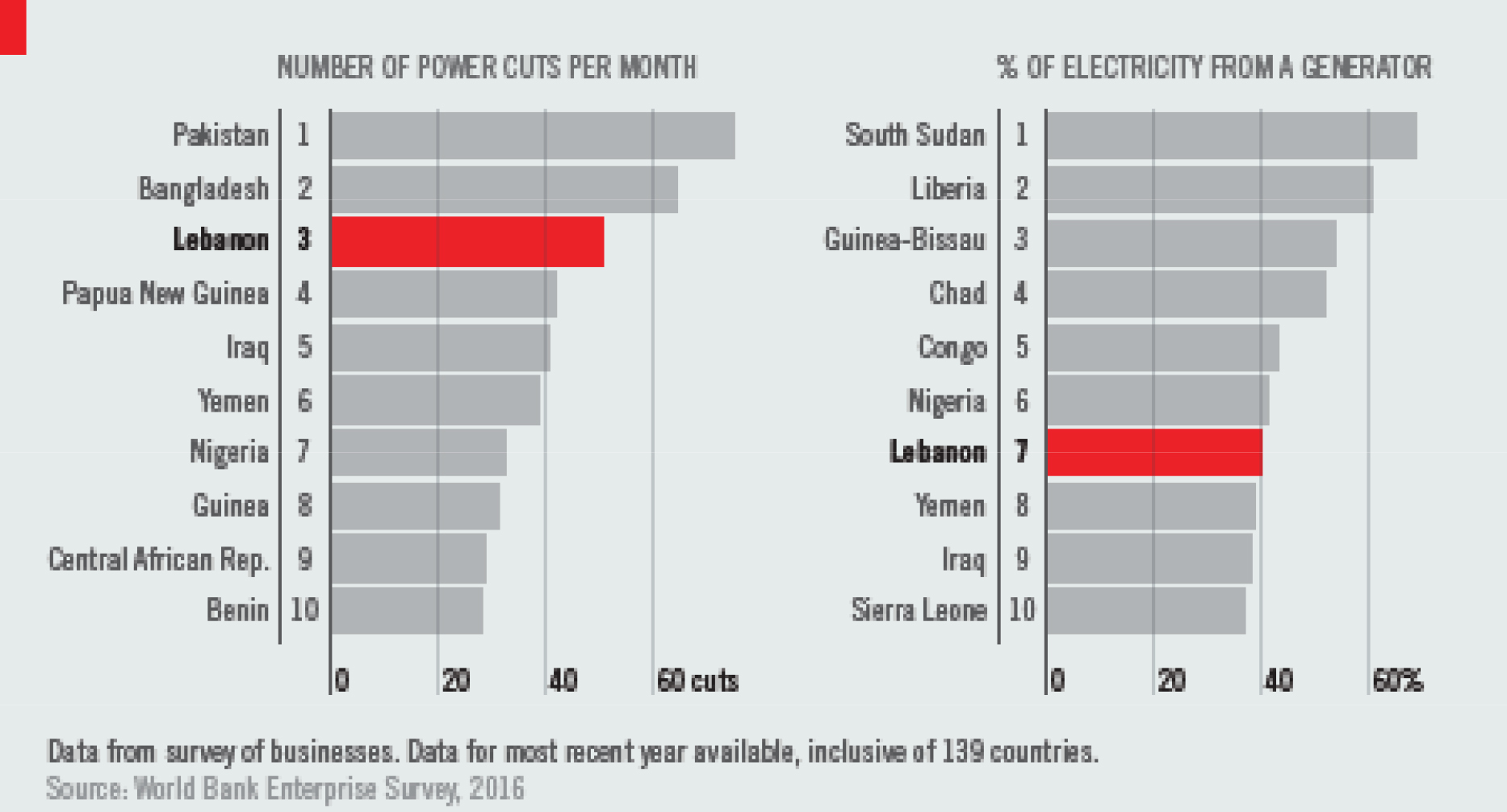 The government wants to set up solar power infrastructure that would generate 1,000 MW and is now readying to tender 120 MW of solar generated electricity after receiving 265 expressions of interest at the end of March, according to a list of applicants published on the website of the Lebanese Center for Energy Conservation (a government agency tied to the MoEW). The plan also calls on the private sector to build a 1000 MW plant at Solata to be powered by natural gas. Electricity Law 462, ratified in 2002, stipulated that a regulator would be the authority to license new power plants, but the government never got around to appointing that body. Parliament, instead, passed legislation in 2014 and 2015 to get around that roadblock by allowing cabinet, on the recommendations of the MoEW and the Ministry of Finance, to decide when the private sector can build power plants.

The government is again looking to shift from burning fuel oil to generate electricity at most of Lebanon’s power plants to using natural gas. The country’s newest power plants at Deir Ammar and Zahrani, built in the 1990s, were meant to use gas but were never supplied. Gas burns cleaner and would help Lebanon reach its climate change commitments, and gas imports would be cheaper and more predictable than fuel oil. It is also possible that Lebanon might find offshore gas fields as companies are now preparing to bid for exploration, with licensing expected in November this year. However, finding gas and extracting it is a possibility that is several years down the road at the earliest. 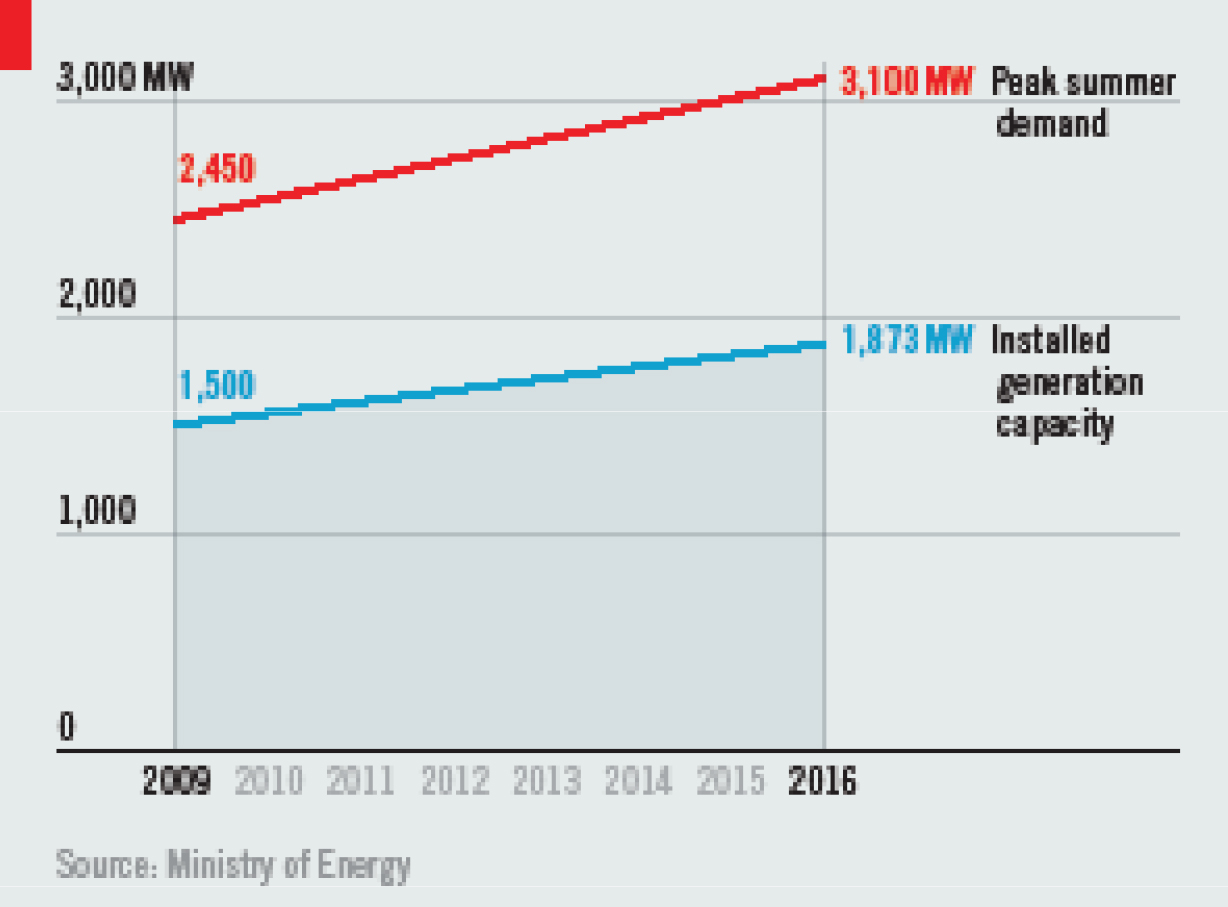 For now, if the government’s plan is to use gas to generate electricity, then Lebanon will have to import that gas. In 2009, the Lebanese government inked a deal to import gas from Egypt via Syria using the Arab Gas Pipeline (AGP). Media reports point to dozens of attacks damaging sections of the pipeline in the Sinai Peninsula since 2011, hampering gas supplies to Jordan and Israel, and it is not clear whether the sections of the pipe snaking through war-torn Syria are functional. Even if the AGP was fully operational, the problem has been that there was never enough gas to supply Lebanon. Egypt is currently a net importer of gas to meet its own consumption needs. Its 2015 discovery of the Zohr gas field offshore might change that, but the first gas is expected from Zohr in 2018, and it is not clear where that gas will be allocated, domestically in Egypt or for export.

In any case, the AGP only connects Lebanon in the north, at Tripoli. Lebanon would have to import Liquified Natural Gas (LNG) from a supplier abroad to feed the country’s other power plants, and it would need to build a pipeline to connect them. The plan calls for a pipeline that would extend from Solata, the proposed 1000 MW power plant in the north, to Tyre in south Lebanon. The plan forecasts the construction of the pipeline at just under $200 million, but does not acknowledge that much of its proposed pathway cuts through urban areas. The government would have to clear land, including part of the Palestinian refugee camp Ain al-Hilweh, to construct the proposed pipeline, and its proposal does not mention the costs of doing so.

The plan suggests the alternative of contracting three floating storage regasification units (FSRUs) to import the needed gas. A FSRU takes LNG and converts the liquid gas back into its gaseous form for power plants to burn and generate electricity. FSRUs come in different capacities, but three FSRUs would be unnecessary if Lebanon’s power plants were connected by pipeline. If the government does end up with plans to tender three FSRUs, then it is tacitly acknowledging that a coastal pipeline connecting Lebanon’s power plants is not possible.

The MoEW did not want to discuss the proposed electricity plan with Executive and has kept its public comments on the plan to a minimum. One of the ministry officials that Executive spoke with on condition of anonymity described many of the items in the plan as too far-fetched and politically motivated. In the end, the government is proposing a plan in the same way it has operated the electricity sector, and we are all still living in the dark.