Syrian refugees in Lebanon are being relocated to third countries

One might look at the change in number of registered Syrian refugees in Lebanon during 2015 and incorrectly assume Syria’s civil war is on the wane. Since the Office of the UN High Commissioner for Refugees (UNHCR) first began recognizing Syrian asylum seekers in Lebanon in 2012, their numbers have grown year-on-year until 2014. In 2015, however, the number of registered Syrian refugees in Lebanon began going down. The slight decrease (approximately 77,000 refugees or 6.7 percent as of November 30, 2015 — according to the most recent data available) is no indication that stability is returning to Syria. Rather, it is the direct result of a Lebanese policy decision to push the number down.

The decline is in part attributed to stringent visa restrictions put in place in January 2015 for Syrians attempting entrance into Lebanon. The country still grants Syrians humanitarian visas, but UNHCR says “very few” cases have since qualified. In tandem with these new visa rules, the government passed a decree in 2015 to deregister refugees, also lowering the number of refugees supported by UNHCR. In an email exchange with Executive, UNHCR explains that, “On April 24 [2015], the Ministry of Social Affairs notified UNHCR that refugees having entered after January 5 and having subsequently registered should be deregistered. UNHCR was duty bound to comply and inactivated individuals who had entered Lebanon after that date.” Based on data from UNHCR’s website, Executive calculates that at least 37,304 Syrians lost their refugee status as a result of this decision. Under normal circumstances, UNHCR only deregisters refugees if they have died, left the country or stopped showing up for meetings or other interactions with UNHCR. In the first nine months of 2015 — the most recent data available — UNHCR’s representative in Lebanon, Mireille Girard, told Executive in a November interview that 149,000 refugees had been deregistered, up from the 125,000 deregistered in 2014. 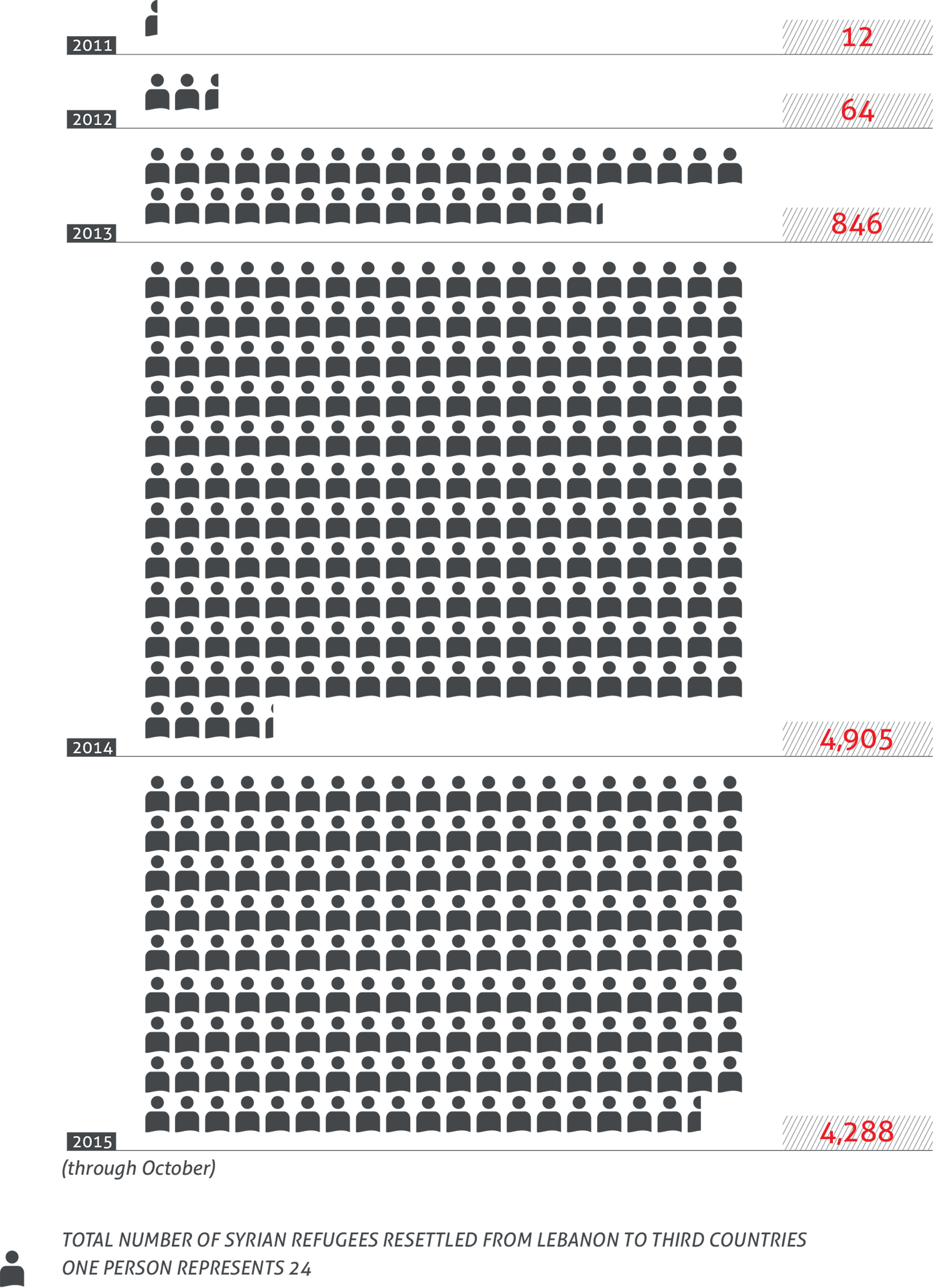 For UNHCR, determining where people have gone after deregistration is no easy task. Some, Girard says, have returned to Syria, though she notes that it is not a choice refugees make “unless they have a compelling reason. It is not a decision full of hope that things have gotten better [in Syria].” Some, she adds, have either left Lebanon to live with family elsewhere in the region while others have turned to smugglers, hoping to make their way to Europe. There is a solid number of deregistered refugees who have illegally left the country by paying traffickers to smuggle them into Turkey or Europe. “We get information from different sources to try and triangulate the information. We do try to find out if there are indications that people have tried to go to Europe. We conducted a random survey recently and found around 40 percent of people said they either knew someone or heard of someone who has left,” Girard says. Lebanon’s Internal Security Forces have prevented illegal departures. According to United Nations’ estimates, about half of the International Organization for Migration’s figure of 332,000 asylum seekers through August 2015 that tried to reach Europe from the Mediterranean Sea were Syrian.

Executive was only able to obtain conclusive data on the number of formal resettlements to third countries. Since 2013, countries have agreed to resettlement pledges for some 162,000 Syrian refugees from countries across the Middle East. For 2015, the number of pledges allocated for refugees in Lebanon is 16,600. Through October 2015, some 4,228 Syrian refugees had left Lebanon to third countries through resettlement programs. The aim, UNHCR’s Girard told Executive, is to sooner-rather-than-later resettle 10 percent of Lebanon’s Syrian refugee population. “With 1 million refugees in Lebanon, our target is 100,000. That would be noticed by everybody and would have an impact,” she said.

In the near term, that target for Lebanon will be slow to reach. The process of resettlement takes time, with refugees sometimes departing more than a year after their application is submitted. Since 2011, only 10,155 Syrian refugees in Lebanon have been resettled — primarily to countries in the Americas, Europe and Oceania. UNHCR says they cannot give a specific country-by-country breakdown of where refugees were resettled.

For 2016, UNHCR is still waiting to hear what resettlement quotas will be allocated for Lebanon. With seemingly no end to the war alongside deteriorating living conditions, Syrian refugees in Lebanon no doubt question their future. Only a few, however, will receive a permanent answer. 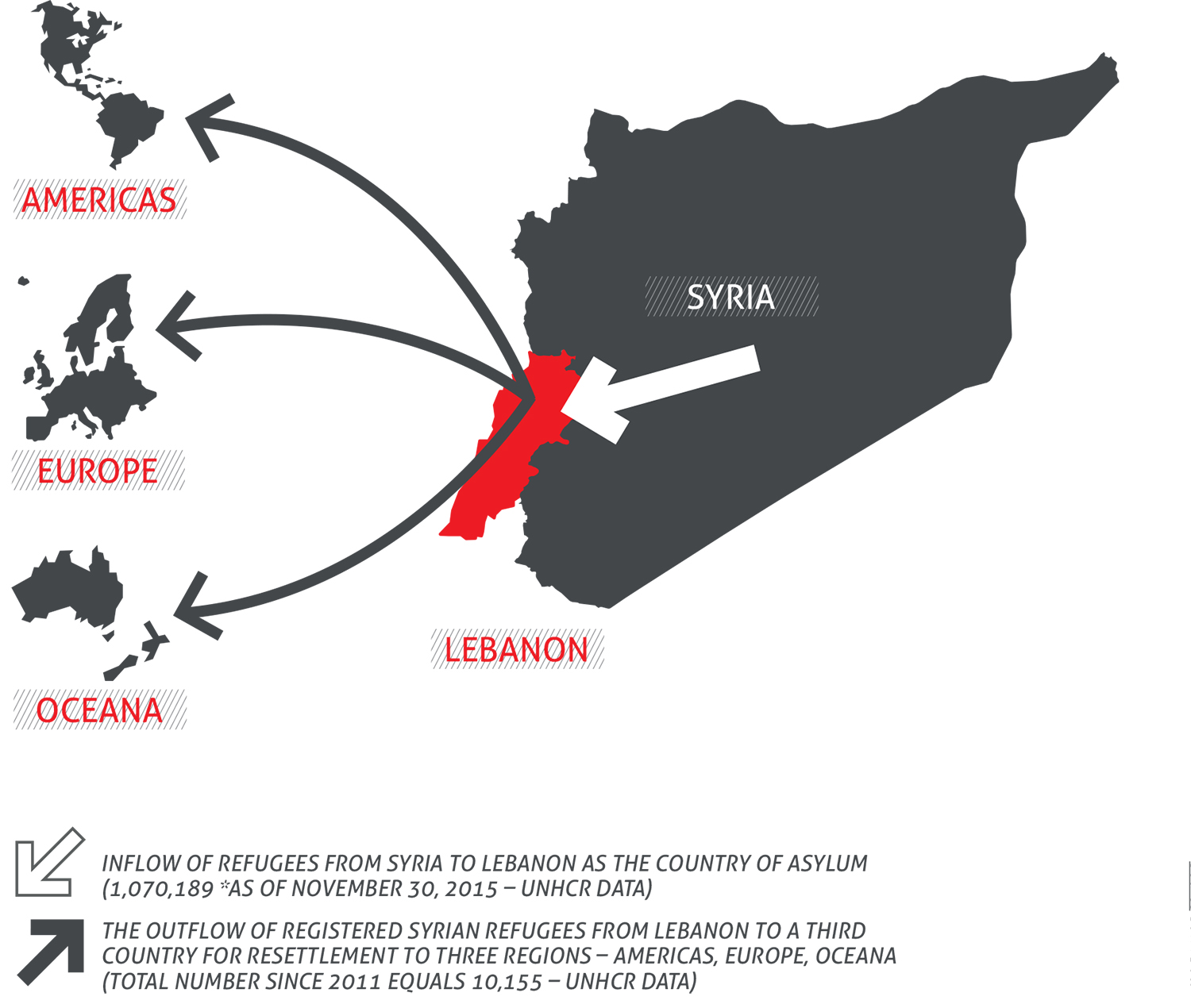 Luck of the winners

Growth amid the thorns