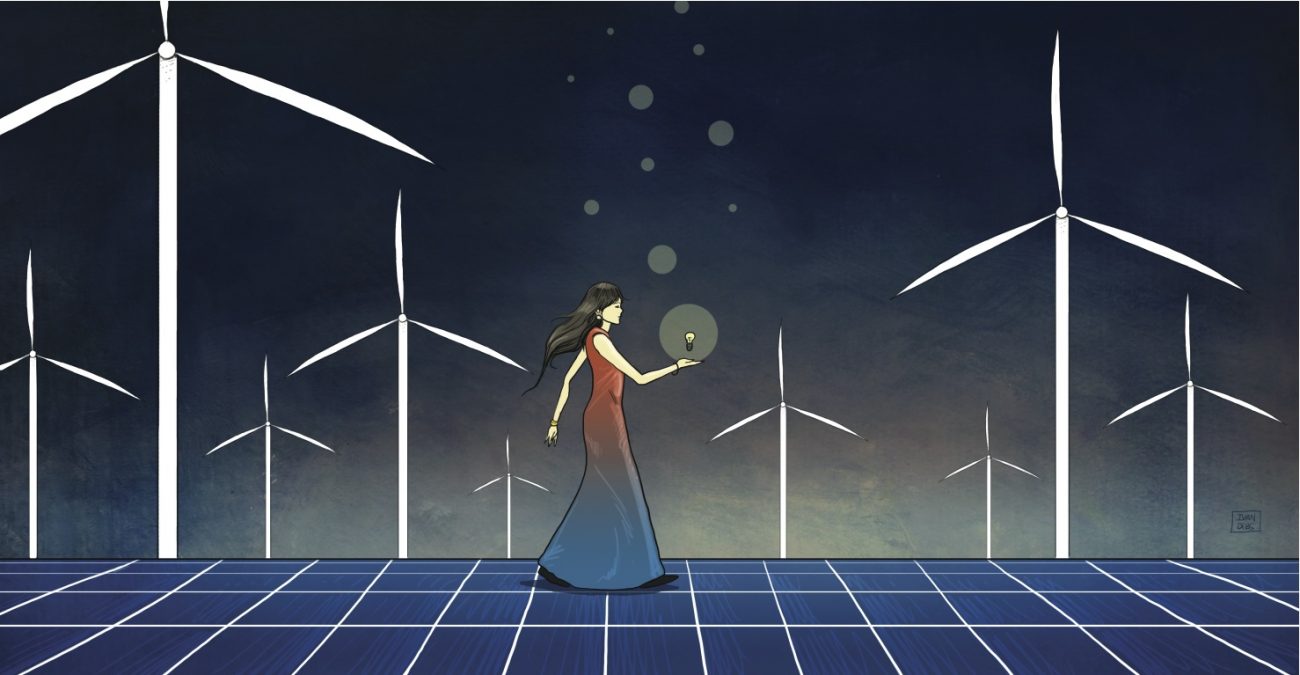 Lebanon could license the construction of nearly 380 megawatts (MW) of renewable energy plants as early as this summer, a Ministry of Energy and Water (MoEW) official tells Executive. This would mean a rise in generation capacity of just over 20 percent — a far cry from satisfying the country’s demand for power. This clean electricity, generated through new windmill installations and solar farms, would, however, help Lebanon reach its 2020 target of 12 percent renewable energy in the national power mix. Companies would need to raise capital to finance construction of the projects, a not-so-difficult prospect thanks to a 2010 central bank incentive and spurred on by last year’s Paris Agreement on climate change. 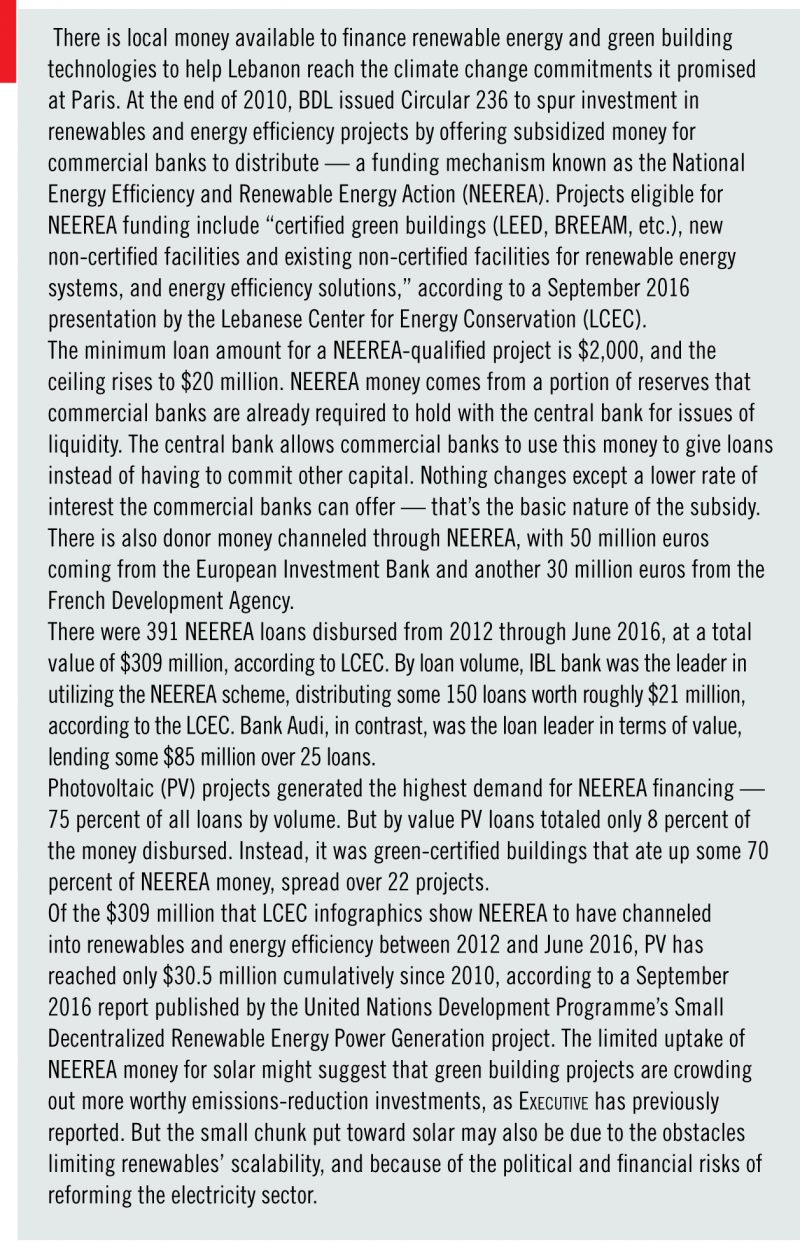 It is in a blustery part of north Lebanon that the government envisions construction of three windfarms. Near Akkar, in the country’s wind corridor, rotating turbines would generate some 200 MW of clean electricity if the government finally licenses their construction.

The MoEW began the tendering process back in 2013, shortlisting three bids. Four years on, “We’ve hopefully come to the last steps,” says Pierre el-Khoury, head of the Lebanese Center for Energy Conservation (LCEC), the technical body at the MoEW responsible for renewables.

Electricity Law 462, ratified in 2002, stipulated that a regulator would license new power plants, but the government never got around to appointing that body. Instead, Parliament passed legislation in 2014 and 2015 to get around the legislation by allowing cabinet, on the recommendations of the MoEW and the Ministry of Finance, to decide when the private sector could build power plants. Now, Khoury tells Executive, the windmills are waiting for approval from the Minister of Finance so that both ministries can ask cabinet for the permits.

In addition to the 200 MW of wind energy, the MoEW also wants to license up to 180 MW of solar. At the beginning of 2017, the ministry asked for expressions of interest (EOI) for the construction of 12 solar farms, consisting of three projects each in the districts of South Lebanon, Mount Lebanon, Bekaa Valley, and North Lebanon. The EOI call resulted in 265 project proposals submitted by 173 companies, Khoury says. “Based on this high rate of replies, the MoEW finalized the tender documents and sent a request asking [companies] to submit detailed offers.” Khoury says the deadline to submit bids is mid-August, adding that the ministry needs to move quickly. “It will take us some time to review these offers. But we need to finalize the whole process before April 2018,” as that is when Cabinet’s mandate to license new private sector power plants expires.

If the Council of Ministers does end up licensing the windmills this summer, and the solar projects before April 2018, then companies will need to finance the cost of construction.

That does not seem like much of an obstacle. In 2010, Banque du Liban (BDL), Lebanon’s central bank, moved to spur investment in renewables by creating a funding mechanism known as the National Energy Efficiency and Renewable Energy Action (NEEREA). FFA Private Bank, a local investment firm, recently announced a $1 billion investment vehicle they have termed the “Lebanon Infrastructure Fund” to pour money, at least initially, into renewables.

While the cost of constructing the wind and solar projects would be financed by the private sector, the terms to sell that electricity to Lebanon’s public utility, Electricité du Liban (EDL), will be governed by a power-purchase agreement (PPA). For wind, an official cost figure has not been disclosed because it would affect the government’s negotiating leverage, but media reports speculate costs could range from $120-150 million; for solar Khoury says that it is “important to have 180 MW costing $300 million.” The government, on behalf of EDL, will enter a PPA with companies to buy electricity for point x dollars per kilowatt hour over 20 years — the idea, Khoury tells Executive, “is to have a 20-year PPA contract at a fixed price.” PPA terms are still being finalized for the wind project, but once they are, companies will have three months to sign. Companies will then have 18 months to complete all the necessary legal, administrative, and logistical issues to have a completely ready-to-build situation.

PPAs could be costly to the government if power prices decrease because they lock prices in over a long period of time. Companies will look for assurances that the government will pay up if, for some reason, the utility cannot take in the electricity, termed a “take or pay clause.” The clause is typical of PPA contracts as it reduces the risk to companies, reflected in lower cost premiums. The clause could cost the government $55.1 million for wind and $25 million for solar upfront, but alongside  other derisking measures, could save the treasury hundreds of millions of dollars over the term of the contract, Vahakn Kabakian, Lebanon’s Climate change portfolio manager at the United Nations Development Programme (UNDP), argued in an April 2017 op-ed for Executive. 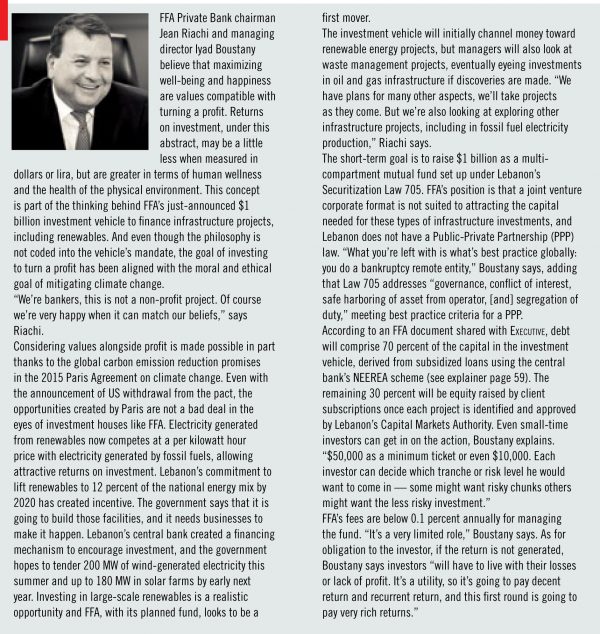 If Cabinet licenses the projects on time, then clean electricity could begin flowing to Lebanese homes and businesses before 2020. Now that Parliament has, after eight years and two extensions of its mandate, finally figured out a new electoral law (see vote law infographic), the hope is that it will vote on the Paris Agreement. Lebanon would then be required by law to meet its renewable energy promises and the climate change pledges it put forward at Paris.

Local meteorologists are forecasting strong breezes and a lot of sun.