Home Economics & Policy How to have a fair election

How to have a fair election

The goal of any electoral law in a representative democracy is fair and accurate representation. Many people in the country have argued that even with parliamentary seats divided among the country’s different religious groups, Lebanon has not done well in achieving this fair and accurate representation with its own electoral laws. A long-standing allegation against Lebanon’s political elite posits that those in power draft laws to keep themselves and/or their political parties in those positions. And for at least the past 12 years, politicians have debated more than ten draft laws aimed toward fairer representation, with little success.

Draft law discussions are currently raging among the country’s various political parties, outside of both Parliament and public spotlight. Daily press reports offer hints as to the drafts being tabled, but no repository of draft law texts exists for interested citizens to examine the various ideas in detail. According to the current schedule (set forth in the existing electoral law from 2008), parliamentary elections should be held on May 21, and the law governing the polls should be agreed and published in the Official Gazette by late February. To help readers understand the various options available, Executive will explain the current voting system, the systems allegedly under discussion, and a few other proposals that have been suggested over the years.

Electoral law 25 of 2008 saw Lebanon’s 128 parliamentarians elected from 26 districts (qada being the Arabic singular). The law relies on a majoritarian seat allocation system, meaning the candidate with the most votes wins the seat. As an example, imagine a district with five seats: Two Sunni, two Maronite, one Druze. The majoritarian calculation system means that the top two Sunni candidates with the most votes get seats, as do the top two Maronite candidates and the top Druze candidate, even if all of those candidates individually only secure 33.3 percent  or more of the votes in the district. The obvious downside of majoritarian systems is that it means a lot of wasted votes, for instance in our example, 66.9 percent of the voters in that district would be represented by MPs they didn’t vote for.

One way to mitigate the risk of minority rule highlighted above by adopting a seat allocation system based on proportional representation (PR), which roughly means that seats are allocated based on the percentage of votes received, instead of based on the “highest number of votes wins” principle currently in place. Moving to such a system would first and foremost mean electoral lists have to be mandated by law, which they currently are not, although in practice parties did form lists in 2009 and in previous elections. The legal mandate of a list is essential in a PR system. In Lebanon, while lists have never been a mandatory requirement under the law, as stated above parties have formed them in the past. However, because the lists are not mandatory under the current system, voters do have the option to “mix and match” between or among the lists, depending on how many there are. For example, in 2009 the Free Patriotic Movement list in Metn was “broken” by Michel Murr and an ally, who proved more popular than candidates on the FPM list for the same seats. It’s worth noting that under a full PR system, voters would lose the option of mixing and matching, instead they would be required to vote for only one list.

Based on past draft laws, interviews with politicians and a civil society group, as well as press reports, it seems that Lebanon would opt for an open list system should it adopt either a full or partial PR seat allocation system. This makes sense if the past is any guide. In many countries with PR, lists are formed by separate parties (meaning if there are five parties with various popularity in a district, there will be five lists). However, given the demographic mix of the country’s various districts (none are one hundred percent populated by a single religious group) and support (in some cases) for more than one party among members of the same religious group, lists in Lebanese districts tend not to reflect a single party but rather an alliance of parties. To illustrate, imagine parties A, B, C and D are popular in a district. Instead of four party-specific lists, Lebanese voters will often be faced with either one list including all the parties or two lists (A+B as list one and C+D as list two, for example). Open lists make this tendency for district-by-district alliances possible, whereas closed lists do not.

At time of writing, local press was abuzz with speculation that, should a new electoral law be agreed, it will likely mix the two aforementioned systems (i.e., some MPs would be elected based on top vote getters being awarded seats and others would be elected based on PR). In such a scenario, the country would likely be divided into two “levels” of districts: smaller districts more reflective of the qada for majoritarian allocation, and larger districts reflective of country’s five traditional governorates (mohafaza, the Arabic singular) for PR allocation. Such a hybrid system was endorsed in 2006 by a commission that was tasked with drafting a fairer and more representative electoral law and appointed by the 2005 Fouad Siniora government shortly after elections that year.

An ideal electoral law would distribute seats more evenly based on the number of registered voters in a district. Additionally, in a PR system, the larger the district, the more accurately PR will reflect the will of the voters. Imagine a district with three seats and five lists. It’s likely that only two or maximum three lists will be allocated seats. In a ten-seat district, It is possible that all five lists would get at least one seat.

As district sizes get bigger, however, minority influence on the outcome can still diminish even with a PR or hybrid system. For example, imagine a PR district for North Lebanon (including the districts of Akkar, Tripoli, Minnyeh-Donnyeh, Batroun, Koura and Bcharre). Based on the 2009 voter roles, this North Lebanon district would have 679,699 registered voters. If 60 percent turned out, that would leave 407,819 votes in a district with 25 seats (assuming each district’s 2009 seats were added together). The PR seat allocation threshold, therefore, would be 16,312 votes for a list to be allocated one seat. Imagine a very popular local candidate (Candidate A) in one district can only make alliances with very unpopular candidates from other districts to form a list. Imagine Candidate A’s list ends up receiving only 14,000 votes, 90 percent of which come from his or her home district. Candidate A does not get a seat under the pure PR system, and the the voters in his or her district feel they have no representation in Parliament.

Imagine we add the sectarian dimension of Lebanese politics to the above example. If Candidate A is of a religious community with a minority of voters compared to the overall North Lebanon district, not only do local voters feel cheated out of their candidate, but will also most likely claim that another religious community has usurped their rights by electing an unpopular candidate to represent members of their religion. This was the argument in the three election cycles after the Civil War, while Lebanon was still under the influence of its larger neighbor. Christians complained districts were drawn in such a way that non-Christian voters were the ones electing Christian candidates. This argument surfaced in some districts in 2009 as well because some districts have religious minority voting blocks large enough to tip the scales in one direction or another (i.e., the argument goes: If only Christians voted in district X, Candidate A would have won, but the Sunni voting block swayed the contest for Candidate B).

The fear that sects would not be able to elect their own candidates gave rise in 2012 to the so-called “Orthodox Law”. Under this law, which is no longer under consideration, according to press reports, Lebanon would be represented by only one district and each sect would vote for its own candidates. This law did not envision taking a census to actually determine how many members of each sect are currently living and voting in Lebanon, rather it adopted the same seat distribution for sects used in 2009. Less in-your-face was a proposal by the Lebanese Forces (since abandoned) that would have created several non-contiguous districts to group sects as constituencies, effectively getting close to what the Orthodox Law proposed via a different route.

Another option would be dividing Lebanon into 128 districts, which would favor local candidates with a strong following. As each district would only have one seat, this could, in theory, be a majoritarian seat allocation system. However, it is still vulnerable to creative district drawing that might end up with voters feeling disenfranchised. The reverse would be having the entire nation as one electoral district with each voter getting 128 votes. This would work against strong local candidates with limited national recognition. Yet, another choice is the single, non-transferrable vote. Under this system, voters get only one vote. The 128 candidates with the most votes are elected. This system makes it especially tricky for political parties to maximize their number of seats, especially in the Lebanese context, where parties tend to have a few very well-known stars. These party stars could attract the most votes from party supporters, leaving the party with fewer seats than it would have had under a different system.

There is no global best practice for designing an electoral system, and voters across the world wake up after election day feeling disappointed, or worse (just ask American supporters of Hillary Clinton, who won the popular vote for president in November 2016, yet had to watch her rival Donald Trump be sworn in as president on January 20). No matter the system used, the potential for minority voices being silenced and results being skewed, either by drawing districts in a certain way or out-right vote buying, always exists. A voting system arguably “works best” when it has the most buy-in from the electorate. It’s a worrying sign that discussions of electoral reform in Lebanon are happening behind closed doors. More concerning is the possibility that a relatively complicated law will be adopted with very little time to explain how it works to voters — surely a recipe for feelings of exclusion. 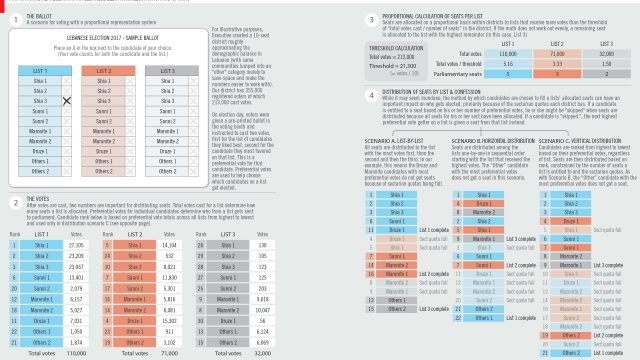 A roadmap for the first licensing round