Waste is a resource in the manufacturing sector, and industrialists say more recyclables are needed

For all the talk of Minister of Agriculture Akram Chehayeb’s waste management plan including robust recycling initiatives, it actually lets municipalities decide how to treat and dispose of their waste with few guidelines and no fixed quotas. That is to say, there is no clear picture of what recycling will look like in Lebanon should the plan – approved by the cabinet on September 9 – actually be implemented. It calls for an 18-month interim period during which municipalities will prepare their waste strategies. During this time, municipalities are to sign any contracts that need signing and build any infrastructure that needs building. As cities and villages ready themselves for garbage duties, waste from Beirut and five surrounding districts will be distributed among newly built sanitary landfills in the northern district of Akkar, the Bekaa Valley and Bourj Hammoud. A small portion of the waste is also supposed to be taken to a new waste treatment facility in the southern city of Saida. During the 18 months, the limited amount of waste sorting done by Sukomi – the Averda company responsible for composting, recycling and landfilling much of the country’s trash – will stop. Neither the company – a sister of the far more well known trash collection firm Sukleen – nor the government have given precise figures on the amount of sorting and recycling Sukomi does. Minister of Environment Mohammad Mashnouk recently said the company landfills around 80 percent of the waste it collects, and an employee tells Executive, on the condition of anonymity because he is not authorized to speak with the press, that Sukomi recycles only the percentage it is contractually obliged to recycle. He declined to provide the percentage.

Prior to the July 17 closure of the Naameh sanitary landfill – which accepted around 50 percent of the country’s waste – the Ministry of Environment maintained Lebanon had a 9 percent recycling rate. Everyone directly involved in recycling Executive has interviewed in the past three months, however, scoffed at the figure as being too low. Several NGOs – including arcenciel and T.E.R.R.E. Liban – and one company – Contra International – have run recycling programs in Lebanon for years. Executive has not been able to ascertain whether the waste they collect and sell for reuse is included in the 9 percent. In late October, Sukleen said in a press release that the company collects recyclables from over 2,300 local businesses. Again, Executive is unsure if this activity is captured in the 9 percent. Finally, the informal network of recyclable material collectors is likely entirely off the radar. All that said, recyclables are a valuable raw material for local industry. Companies in Lebanon transform waste paper, cardboard and plastics into finished and semi-finished products for both the local market and export, explains Fadi Gemayel, president of the Association of Lebanese Industrialists and head of Solicar, a paper and cardboard recycler. Executive sat down with Gemayel to talk about the industry’s need for recyclables. 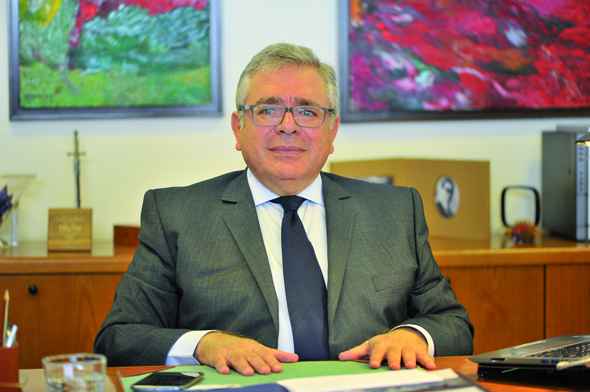 E   Does 9 percent sound like an accurate figure for total recycling in Lebanon?

No. The Lebanese recycling capacity for paper is only 120,000 tons per year. Meaning you need at least 150,000 tons of raw material. That said, we still import 200,000 tons of raw material to make paper locally, so there is plenty of room for growth. Industry is very much aware of the value of waste as a raw material. Paper recycling started in Lebanon in 1929. Worldwide, 70 to 80 percent of all packaging material made of paper or cardboard is made of recycled material. In Lebanon, we are very close to that number. Also, there are targets for recovery, how much are you obliged to recover from your paper you put on the market. That rate is around 60 percent in Europe. We are not at this level yet in Lebanon. But recycling is important for the packaging industry. There are at least five major paper recyclers in Lebanon.

E   Do you have any numbers or studies suggesting what the total industrial demand for recyclables is?

E   But industry does use paper, as you’ve noted, plastics and, to a lesser extent, glass and metal, correct?

Yes. I’ve explained paper. Plastics are also recycled. There are many small companies using scrap and bigger companies that create fiber from recycled plastic and export it to Denmark. For glass, Lebanon has been known for glass work since the Phoenician times. Today, we have sophisticated factories producing glass. We have two. The biggest, however, was bombed in the 2006 war and never rebuilt. I am not sure of our capacity for glass recycling, but glass is used as a raw material in Lebanon.

E   What about metal? You often hear Lebanon has no foundries – which melt scrap metal to repurpose it for reuse. Do we have foundries?

There are two big firms and many smaller, more specialized ones. However, a huge amount of scrap gets exported because of the problems in costs. So the bulk of the raw material is exported. The big foundries have not been able to sustain. Export less and the foundries will be happy. The problem is a foundry is very energy intensive, and in countries around us, they have cheap, subsidized energy. Regional foundries can bid up the price for scrap. Here you are squeezed because of the high energy costs, so local foundries cannot pay as much for the raw material.

E   Where does industry source recyclables?

There are sorting facilities, like the one operated by Sukomi. We, as Solicr, buy from Sukomi. There are also Zero Waste Act, T.E.R.R.E Liban and arcenciel. There is a network.

E   What role does the informal sector play?

Some time ago, the informal sector was very strong. Nowadays it exists, but less and less as people are going and picking through the garbage. Today, supermarkets are selling used cardboard. And the more Sukleen got organized, the more scavenging was reduced from the bin itself.

E   When did that happen?

I don’t have a clear idea of the timeframe, and I don’t know exactly what triggered it. Scavenging exists. The rate of recovery in Lebanon is high, but it is not perfectly organized.

E   If there were to be more formal recycling in Lebanon, could industry absorb the additional volumes of recyclables?

E   Can you put a figure on the cost savings associated with using recyclables as a raw material?

It’s hard to give an exact figure because we’re dealing with a major constraint: the cost of energy. Recycling and the green industry are nice, but they come with a price tag. It is very energy intensive. Very. Energy costs account for as much as 35 percent of the selling price of paper. Energy costs are high for plastics and for glass. We have high energy costs, and we are surrounded with countries that subsidize their energy costs. The fact that Lebanese industry has been enduring for so long means there is an economic reason. But don’t think recycling is a huge money saver.

Blame it on Bassil