Getting to the heart of it

Lebanon’s power sector is a substantial drain on the state’s treasury, responsible for 40 percent of the country’s fiscal deficit, according to the World Bank. Significant reforms are required to cut the fiscal shortfall and address structural and governance issues at the root of the crisis.

The country’s power generation capacity is nearly 2,050 megawatts (MW), excluding the capacity of two temporary power barges, while the demand is estimated at 3,500 MW. The electricity tariff is largely subsidized; the average tariff of the state-owned electricity utility—Electricite du Liban (EDL)—is 9.5 cents for each kilowatt hour (kWh) consumed, while the cost of generation ranges from 17 to 23 cents/kWh. EDL thus incurs significant financial losses, between $1.5-2 billion annually, depending on oil prices. The country also relies on expensive heavy fuel oil and diesel oil, unlike the rest of the Middle East where natural gas, considered cleaner, and cheaper, is the largest source for electricity generation.

It is obvious, looking at the figures, that fixing the power sector requires increasing the power generation capacity by adding power plants and restructuring the tariff to reflect the true cost of generation—something that the Ministry of Energy and Water (MoEW) is keen to do. But reforming the power sector also entails immediately confronting deep-rooted structural and governance issues.

In 2018, the MoEW took steps to increase the generation capacity through thermal and renewable plants and temporary power barges, and started the process of switching to natural gas through floating storage and regasification units (FSRUs).

Lebanon signed four contracts in 2018, with the aim of adding 752 MW in power generation capacity in the upcoming years. One contract relates to the Deir Ammar thermal plant and the other three deal with wind farms in Akkar. Two expressions of interest (EoI) for a second round of wind and solar development projects ranging between 410-700 MW were also launched.

In February, the MoEW signed 20-year power purchase agreements (PPAs) to develop three wind farms in Akkar with three different joint-ventures: Lebanon Wind Power (60 MW), Sustainable Akkar (82.5 MW), and Hawa Akkar (70 MW), at the cost of 10.75 cents per kWh for the first three years, and 9.6 cents per kWh the remaining years. The first two of these ventures were later bought by a common entity. These farms are a breakthrough for the Lebanese power sector: they enable a new modality where the public utility purchases electricity from the private sector; they reduce dependence on fossil fuels’ price volatility, contributing to Lebanon’s new target of 30 percent renewable energy by 2030; and they will generate cheaper electricity than EDL’s thermal power plants. However, these wind energy initiatives are significantly more expensive than similar projects in the region and across the globe, with the global cost of electricity averaging 6 cents per kWh for onshore wind in 2017. For Lebanon, the higher cost is mainly due to the uncertainty in the sector, which is driving up the risk premium that companies account for in the projects’ finances. These wind farms, planned to be completed by 2020, face the challenge of attracting a required investment of approximately $360 million and risk setback due to political turmoil, following a five-year delay between the launch of the request for proposal and February’s PPA signature.

In May, Lebanon restarted the construction of a 540 MW power plant in the north of Lebanon at Deir Ammar, expected to come online in 2020 under a 20-year build-operate-transfer (BOT) agreement. In October, Lebanon agreed to change the agreement with the international firm initially contracted to build the plant in 2013, into a BOT, following a dispute over payment of value added tax between the firm and Lebanon’s finance and energy ministries.

The year also witnessed a call for EoIs for a second round of wind and solar energy projects, aiming to develop four wind farms with a total capacity ranging between 200-400 MW, and three solar photovoltaic farms with a total battery storage capacity ranging between 210 and 300 MW, through PPAs. The calls resulted in 42 EoIs for the wind projects and 75 for the solar projects. The first round for solar photovoltaic farms, launched in 2017, resulted in 256 EoIs, of which 42 prequalified companies were requested to submit a proposal by October 2017. The awarding of the first solar round is still pending due to regulatory issues and political conflicts, and the next step for the second round of wind and solar projects is still unknown.

The first step in switching to natural gas

While Lebanon is moving forward in renewable energy, the country is also planning the transition of current and future power plants into using cleaner fossil fuel sources.

Adding natural gas to Lebanon’s fuel mix would improve the country’s energy security by diversifying fuel and supply sources, and reduce fuel costs by approximately 40 percent, according to the energy minister. It would also serve to minimize greenhouse gas emissions. The benefit of such a transition would vastly increase if Lebanon finds and develops offshore oil and gas reserves.

The country’s 2010 electricity plan envisioned that two-thirds of the fuel mix would be made up of natural gas from multiple supply sources. To achieve that, Lebanon will need to develop the necessary infrastructure for the supply and distribution of natural gas, and convert and build new power plants operating primarily on natural gas. Two measures were identified that could achieve this over the short term: the procurement of natural gas through an FSRU and the supply of natural gas to the power plants via a coastal gas pipeline. Moored on the coast, the FSRU would be fed with liquefied natural gas (LNG) imported by ship and, following a regasification process, would feed gas to Lebanon’s power plants via a coastal pipeline or, more realistically, via several smaller pipelines that stretch from one plant to another in its vicinity. Last year, Lebanon launched an FSRU tender, its second attempt. While the original tender outlined that one FSRU would be built at Deir Ammar, the updated EoI calls for three FSRUs: one of each to be located at Deir Ammar and Selaata in the north, and one at Zahrani, south of Beirut. In 2018, 13 consortiums were prequalified to participate in the tender of the project, eight of which submitted proposals in late November 2018. Details of the projects related to the source of LNG and the actual cost of energy, driven by the regular necessary shipments remain unclear at this stage.

Past plans by the MoEW have remained mostly on paper, but the alarming fiscal deficit and the growing frustration of unreliable electricity supply may prompt power sector reforms in the near future. The International Monetary Fund stated in February 2018 that “electricity reforms should focus on expanding capacity and eliminating subsidies.” While it does make sense from a purely fiscal perspective to focus on the sector’s drain on the state budget—which should also account for illegal connections and non-billed consumption—the existence of a strong institutional system is a necessity for achieving true reforms, and authorities in the sector must address the underlying structural and governance issues. Otherwise, even with generation increased to match the current peak demand, the sector will encounter the same shortcomings in the future, as a result of growing demand.

Lebanon’s Capital Investment Plan (CIP), presented in April at CEDRE, includes plans to increase generation capacity and upgrade high and medium voltage transmission lines and the low voltage in the distribution network, in line with EDL’s master Plan for 2023-2030.

According to the CIP, four generation plants of approximately 500 MW each are planned to be completed by 2023: two in Selaata, one in Zahrani, and one in Jiyeh (by modernizing the Jiyeh power plant), in addition to the previously mentioned BOT in Deir Ammar—projected to be completed by 2020. If all these plans come to fruition, expected total installed capacity would reach 4,925 MW, combining all renewable energy projects and existing plants. Two more thermal plants and further renewable energy investments are also planned in the long run, for 2027-2030. All new power plants are expected to run primarily on natural gas, with heavy fuel oil as a fallback option in the absence of natural gas.

The reinforcement of the grid is a priority, as the government has not improved the grid network simultaneously with recent contracted improvements to power plants, causing inefficiencies and losses, and hindering the plants’ ability to operate at full capacity, as was the case when a third power barge was connected to the Zouk plant in August 2018.

The government is also planning a tariff hike, based on a price of $60 per oil barrel. Eliminating subsidies is a necessity for the proper functioning of the sector. However, they should be coupled with an increase in power generation and carefully designed to mitigate the impact on vulnerable households and ensure equity. The sector has failed to achieve this in the past few decades, with different areas facing different blackout hours, leading to higher generator bills for those suffering from the highest shortage in EDL supply. Removal of the subsidies should also be coupled with a drastic cut in non-technical losses otherwise illegal connections might increase in the future. 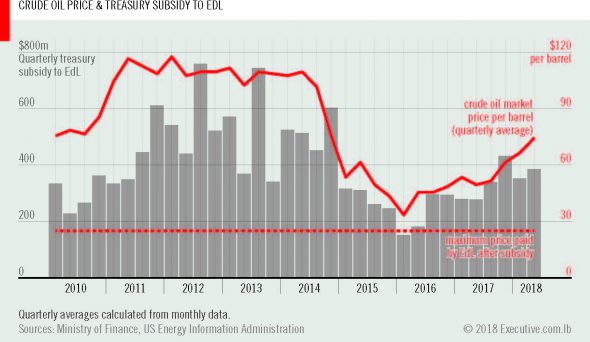 The gravity of the situation has prompted several unsolicited proposals (USPs) from international energy firms to improve Lebanon’s power sector. The growing economic crisis might prompt the government to begin direct negotiations pursuing USPs, which would not be an unusual phenomenon in countries with power crises.

While USPs enable governments to identify innovative solutions to severe infrastructure challenges and capture the private sector’s interest in implementing commercially viable projects, they bring their own set of challenges.

These proposals typically do not fall within a government’s planned energy projects, posing the challenge of integrating the proposed solutions within the strategy for the overall energy sector. They are tailored to meet the objectives, equipment, and technologies of the proposing firm, not the citizens, and might compromise air quality. And, most significantly, in the absence of a transparent and true competitive procurement process, their negotiations increase the chance for low governance and low value for money, and heighten the risk for future public-private partnerships. This was the case when Tanzania embarked on direct negotiations to purchase power, which eventually led to arbitration.

Lessons learned from around the globe show that USPs should be channeled into a transparent and competitive process, granting a fair chance to all interested firms, not only a select few. The government should first launch an EoI or request for proposals before entering into direct negotiations, setting guidelines and allowing firms to bid against each other by showcasing their qualifications and innovative solutions with optimized technologies at cost.

The gravity of the sector might also prompt the government to pursue further temporary solutions, further aggravating the deficit.

One thing is certain: The sector needs a comprehensive, optimized strategy that increases power generation and efficiency at the least possible cost and improves the sector’s governance. Such a strategy should be clearly communicated to the Lebanese taxpayers. Implementing electricity Law 462 (2002), which sought to appoint a regulatory authority and “unbundle” EDL into private generation and distribution companies, is necessary to increase confidence, competition, and draw investments in the sector.

Lebanon’s deficit for the year 2018 is estimated at $4.5 billion, though that figure could grow much higher. In the best case scenario, cutting the current EDL deficit of $1.5 billion would be significant, but this is only a first step in addressing Lebanon’s public finance woes. The government needs to address its structural and governance issues across all state institutions—not just in the power sector—and urgency should not compromise transparency or sustainability.

The Syrian refugee crisis in Lebanon