At first glance, the legislative output of the Lebanese Parliament impresses with its extreme volatility. To full understand the matter of legislative productivity requires a contextual view that takes political environment into account.

The election of Michel Aoun as president in October 2016 ended almost two and a half years of vacancy in the post, and was the result of an agreement between Lebanon’s political parties to form a government, headed by Saad Hariri, that would oversee negotiations to draft and pass a new electoral law to govern the first parliamentary election since 2009. The beginning of this new era brought changes that were an indication of state productivity, which had been lacking in Lebanon for several years. These changes included: the ratification of two state budgets; the holding of parliamentary elections; the passage of anti-corruption laws; the enactment of anti-torture legislation and other human rights-related measures; the signing of oil and gas exploration contracts; and the appointment of high-level government, security, and judicial officials.

In considering the output of the state in the last decade, one can discern three distinct political periods. In the first period, 2004 to 2008, there was one set of parliamentary elections, but three resignations of the government, one assassination of a former prime minister, one occupation of Downtown Beirut, and one cross-border war. Skip forward, and we see that between 2014 and 2017 there was the long presidential vacuum and a period of non-performance in terms of the cabinet, as well as the Syrian refugee crisis, the rise of Daesh, and other security concerns. Compared to the preceding and following periods, the Sleiman presidency from 2009 to 2014 was somewhat politically stable, which helps explain the relatively consistent legislative output during Sleiman’s tenure.

The low legislative output of Parliament in 2009 might have, in part, been influenced by the global financial events of 2008. The aftermath of the perceived double whammy in 2008 (the burst of the Dubai real estate bubble and the onset of the Great Recession) was expected to have strongly negative impacts on remittances and financial inflows to Lebanon, though the opposite happened. That year also saw local security upheavals that peaked in May 2008 and brought the country to the brink of renewed civil strife. The resolution of the crisis led to the election of Michel Sleiman. The holding of parliamentary elections in spring 2009 or the relationship between the new president, the parliamentary speaker, and the prime minister are also possible explanations for the low number of laws. The failure to organize and hold parliamentary elections was a presumed factor in the low legislative output of 2013, along with the question of who would succeed Sleiman as president when his term ended on May 25, 2014.

It is possible that the extension of the Parliament’s mandate (in 2013, in 2015, and in 2017), and the vacancy of the presidency that began in the middle of 2014 and ended with the election of Michel Aoun in 2016, did not have a significant impact on the quantity of legislative output for the period 2014 to 2016. The quantitative comparison of legislative output allows us to identify distinct periods but does not offer a measurement of the qualitative component of the output. Measuring the quality of legislative output is a challenge because it comprises different streams. For example, legislation related to laws to approve financial transfers to administrative bodies or to conclude official agreements between states depend on procedural or annual conditions, where each transfer or international agreement must be legislated. Although many laws can be passed in a single period, these laws may not have a transformative effect on society, whereas one single law—such as the public sector salary increase or the election law, both passed in 2017—can have a huge societal or economic impact. 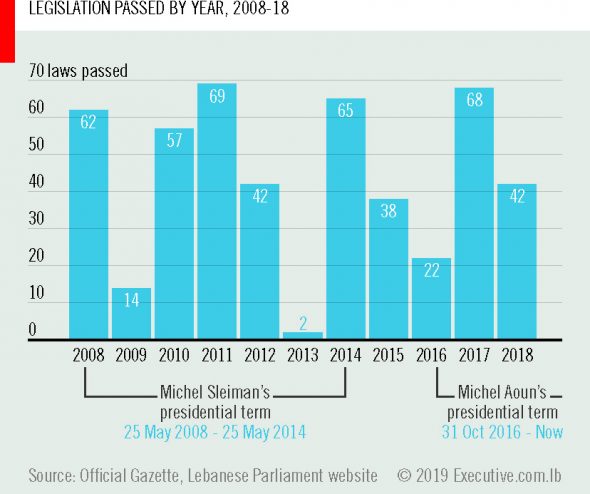 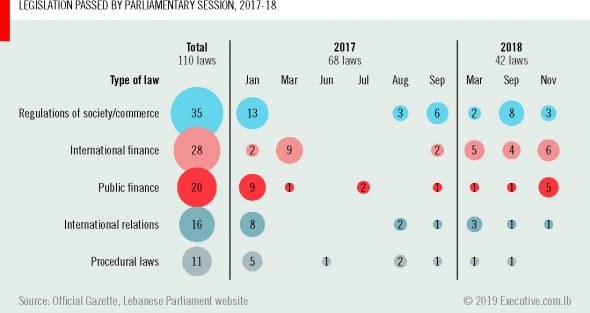 An accumulation of economic woes