The battle for space, time, and money

The long-term effects of Lebanon’s 2015 waste-management crisis will likely linger for years, and chances that the experience will be relived in the medium-term remain high. Incineration is the approved future for nearly half of Lebanon’s waste, despite the fact that opposition has repeatedly derailed incineration plans in the past and opponents to government waste management plans remain adamantly opposed to incineration.

For nearly eight months in 2015, municipal solid waste (MSW) in Beirut and most of the Mount Lebanon governorate (excluding the Jbeil district) was not being collected. Municipalities in this service zone—where waste management, from collection to treatment and landfilling, was conducted by Sukleen and Sukomi, children of parent company Averda—turned to open dumping of trash in the absence of another solution. It also prompted a considerable increase in waste-burning. When the crisis, which was sparked by the closure of the country’s largest sanitary landfill, abated with the reopening of that landfill, Sukleen retrieved waste generated during the crisis from 59 percent of the municipalities it served, the company told Executive in 2016.

A report published in late 2017 sheds light on just how damaging the waste crisis was in Lebanon. In 2011, the Ministry of Environment commissioned a study to determine how many open waste dumps littered the country. That report’s authors found 504 open MSW dumps, 122 of which were not operational at the time. The ministry updated the report with new field research in 2016. This time around, authors found that the number of operational open MSW dumps has actually decreased, but the total number of MSW dumps climbed 22 percent, while the estimated volumes of trash in all of the country’s open dumps jumped 49 percent to over 5.7 million tons (see waste map below).

To fix this mess, the government took a number of decisions. First and foremost, in 2016, the state launched tenders to award Averda’s work to new companies. Averda did not charge extraordinarily high prices for its work in Beirut and most of Mount Lebanon; in fact, the company’s rates were in line with World Bank estimates for waste management in a middle-income country. But, unusually, it was given a monopoly on waste management, from collection to treatment and landfilling, largely through no-bid contracts. Waste managers tend to handle only one part of the garbage-treatment cycle in a given market (i.e., only collection, only treatment, or only landfilling).

Horizontal integration allows for maximizing efficiencies and can result in profit margins slightly higher than possible without said integration. The result of the government tenders was a continuation of horizontal integration, but by a different company and on a slightly smaller scale. A joint venture between Lebanon’s Ramco and Turkey’s Altas won a collection contract for the Metn and Kesrouwan districts, formerly the northern part of Averda’s service zone. A joint venture between Lebanon’s Al-Jihad for Commerce and Contracting and Bulgaria’s Soriko won a collection contract covering the Baabda, Chouf, and Aley districts. That joint venture also won contracts to operate and maintain sorting and composting facilities, as well as two offshore landfills, the temporary waste disposal sites that will be replaced by incinerators in four years, as per the last government-approved plan of 2016.

The city of Beirut is handling its waste alone, Municipality President Jamal Itani told Executive in an October interview. The city already tendered a collection contract (won by Ramco-Altas) that will be implemented in the first quarter of 2018 and plans to tender a waste-incineration plant before the end of 2017, with hopes it will be operational by mid-2020. When Executive spoke with Itani in October, details such as total project cost or financing mechanisms were not discussed. That same year is when the temporary, offshore landfills should reach capacity. This means that in two short years, Lebanon must find the land to build enough incinerators to handle its waste stream or 2015 could be repeated all over again. 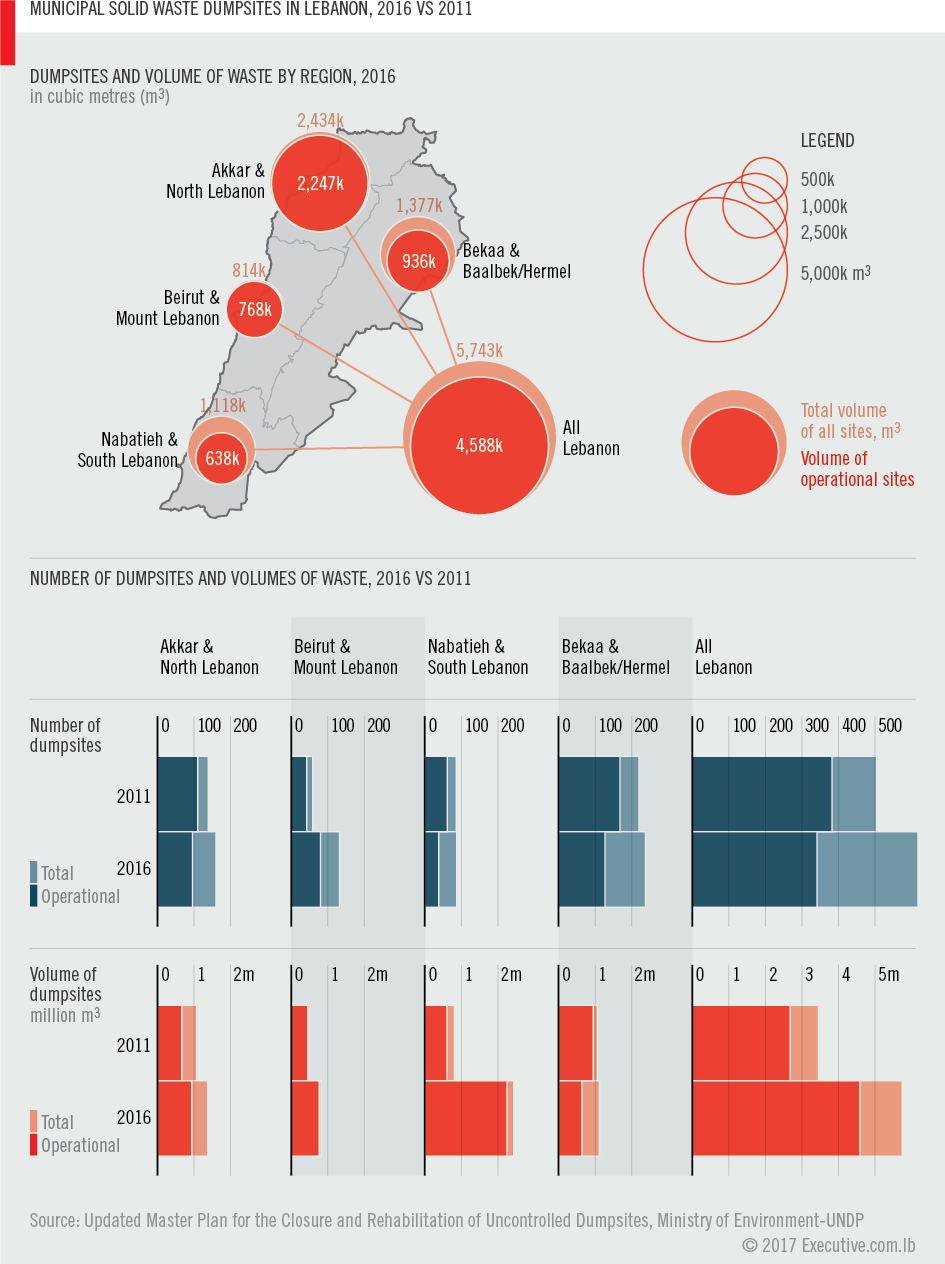 From Pax Ottomana to Pax Persica, and everything bloody in between