How Lebanon can cash in on oil and gas resources

Filling up state coffers is not a straightforward process (Paul Schadler | Flickr | CC BY 2.0)

This article is part of Executive’s special report on the oil and gas sector. Read more stories as they’re published here, or pick up October’s issue at newsstands in Lebanon.

Like skinning the proverbial cat, there are many ways a state can earn money from oil and gas resources. A government’s goal in negotiating an oil and gas deal with international companies is to maximize its share of revenues. While states were once content to give oil and gas companies control over and ownership of hydrocarbons in exchange for a cut of the profits, the times began a-changin’ in 1966. That year, Indonesia reversed the state–petroleum company relationship, prompting the nationalization of resources in countries around the world. Indonesia signed the first major production sharing agreement (or contract, the terminology differs but the idea is the same) the most important innovation of which was that the state owns the resources.

Prior to 1966, governments relied only on royalties and taxes to earn money off of hydrocarbon resources through what are commonly known as concession agreements. Production sharing agreements changed that, and today there are a number of different types of agreements states and oil companies can enter into with a variety of fiscal terms that a state can use to profit from any oil or gas lying beneath its territory. That said, several researchers studying the financial benefits to a state from one system versus another have concluded that, as long as a fiscal system is well designed, which tools a state uses to make money can be largely irrelevant.

In a 2007 book titled “Escaping the Resource Curse”, consultant and oil and gas fiscal regime analyst David Johnston writes, “Contrary to popular belief … the type of system used is of minor importance relative to other design concerns. Governments can achieve their fiscal objectives with whichever fiscal system they choose as long as the system is designed properly.” Unfortunately, Johnston does not offer any example of a ‘perfectly designed’ system, in large part because fiscal regimes vary from country to country and have to take into account both the government’s desire for maximum revenue take as well as the prospectivity of an area open for licensing, political risk and other factors that impact foreign companies’ willingness to invest in a given state.

Evaluating a fiscal system is a difficult task, notes Silvana Tordo in a 2007 World Bank working paper on fiscal systems for hydrocarbons: “Only at the end of a field’s economic life, when all revenue, cost, royalty and tax data are known, can the profitability and the division of profits between the host government and the investors be reliably determined.” Despite this, there are clearly better and worse fiscal regimes, and where Lebanon’s proposed system falls on this spectrum is the matter of some debate. 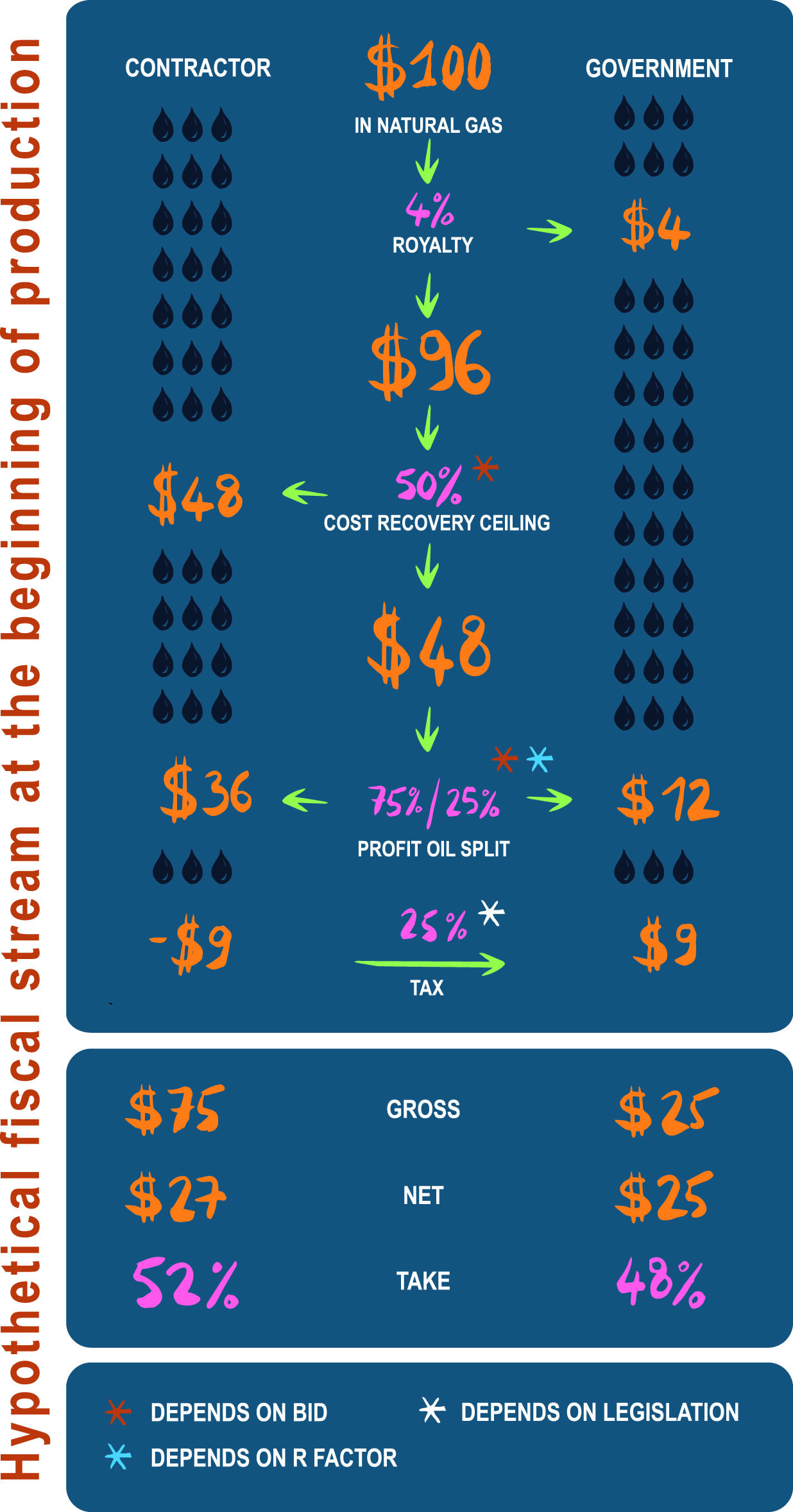 Royalties and taxes are still the mainstay of concession agreements but also play a role in some countries’ production sharing agreements. Lebanon, for example, currently has a model exploration and production sharing agreement that calls for royalties on oil and gas, should any of either be produced. The model contract has to be approved by the council of ministers, and is therefore still subject to change. That said, Lebanon is currently planning to charge a flat 4 percent royalty on gas and a royalty ranging from 5 to 12 percent on oil, based on the volume of production, the Lebanese Petroleum Administration (LPA) confirmed at a workshop for journalists held from September 4 to 5. Paris based energy analyst Nicolas Sarkis argued earlier this year in a letter to then-President Michel Sleiman and articles published in the local press that these rates are far too low compared to global averages. What Sarkis failed to address in his critique, however, was that royalties are only one revenue stream in Lebanon’s model contract.

Aside from handing the state ownership of petroleum resources, production sharing agreements also gave birth to the cost oil–profit oil split (in industry lingo, ‘oil’ is often used as a catchall for all types of hydrocarbons). The idea here is that the company or companies exploring for and, eventually, producing oil or gas get to ‘keep’ some of the resource to sell exclusively with an aim toward recovering the costs of exploration and development. Any additional oil or gas remaining once the company recovers costs (i.e. profit oil) is split between the company and the government. The line between cost oil and profit oil in production sharing agreements is often drawn by the companies in a competitive bid. Lebanon, the LPA announced in April 2013, will allow companies to bid on the cost recovery ceiling (i.e. the line between cost oil and profit oil) as well as how profit oil is split between the state and the companies with rights to drill in each block awarded.

Cost oil calculations can be based on volume or value (i.e. x percent of the barrels of oil go to the company for cost recovery or x percent of the price the company receives from selling what it produced goes for cost recovery). Lebanon’s model contract, according to the Petroleum Activities Regulations approved by the cabinet in 2013, calls for calculating cost oil by volume. The regulations also stipulate that cost recovery will be calculated quarterly, allowing for any costs not recovered in one quarter to be carried to the next until all costs are recovered. The regulations also note that should a well stop producing before costs are fully recovered, the companies are out of luck.

To make things a bit clearer, imagine companies are awarded an offshore block with a cost recovery ceiling of 50 percent. Once a contract is signed, the companies (Lebanese law stipulates that only a consortium of at least three companies can win rights to a block) will either commission surveys to determine where to drill or rely on existing survey data to plan an exploration drilling strategy. Exploration drilling, especially in the deep waters off Lebanon’s coast, costs tens of millions of dollars per well. If the companies discover oil or gas, they will then drill additional appraisal wells to better determine just how much of what they’ve found. After appraisal, if it makes economic sense to develop the discovery, the companies will start producing — and selling — the resource (it is entirely possible to make a discovery only to find it is so small that producing it won’t make the companies any profit). By the time production starts, costs can already be very high. For purely illustrative purposes, let’s say the total cost is $100 million and that a field’s sales generate $20 million per quarter after royalties. With a cost recovery ceiling at 50 percent calculated quarterly, this means that until the companies recover that $100 million (although costs continue to be incurred throughout the lifetime of a project), each quarter they can use 50 percent — the equivalent of $10 million — of their production to recover costs. Under such a scenario, it would take two and a half years for the companies to recover their investment. This also means that each quarter, the government gets its own take from production through its share of profit oil.

The second biddable item (of two) in Lebanon’s model exploration and production sharing agreement is determining the split of profit oil. Indonesia, in its 1966 agreement, opted for a 60–40 split in favor of the state. According to Johnston, the fiscal regime consultant, around 80 percent of production sharing agreements instead use a sliding scale to determine the profit oil split, which is what the LPA said it plans to do during the September media workshop. According to an LPA presentation, the profit oil split will be based on what is known in the industry as the R factor, where ‘R’ stands for the ratio of cumulative project revenues to cumulative project costs. When the R factor equals 1, total revenues have caught up to total costs, meaning all costs have been recovered. Prior to this point (when the R factor is less than 1), the government’s share of profit oil is low. Once cost recovery is reached and until a certain level of company profitability is achieved, the government’s share gets larger and increases in increments as company profitability rises. To illustrate: prior to cost recovery, the government will get 5 percent of profit oil, with 95 percent going to the company. Once cost recovery is reached, until after the company has earned profits equivalent to half of costs, the government gets 10 percent of profit oil, and so on. It is too early to tell what Lebanon’s R factor calculations look like because the companies will bid on these terms.

Both royalties and the structure of Lebanon’s cost oil–profit oil split ensure the state will begin earning money from production almost as soon as it begins. Additionally, however, the Petroleum Activities Regulations codified an area fee companies must pay for the blocks they have the right to explore and — potentially — develop. The regulations say that once the exploration phase is finished (i.e. when a discovery has been made, appraised and determined economically viable for development) companies will have to pay a yearly fee of $350 per square meter for the block they have the rights to in the first year and $400 per square meter in each additional year. The average block size — based on the LPA’s proposed block delineation, which is subject to cabinet approval — is 1,790.7 square kilometers. By the end of the exploration phase, however, companies must give the government back 50 percent of the area of the block they have rights to, meaning that the area fee will be charged to only half the block’s size as originally awarded. Regardless, it will mean on average of $300,000–$400,000 per auctioned block flowing yearly into government coffers.

What it all means

Given that Lebanon is opting for a production sharing agreement, it is important to remember that this means the state owns any resources that may be found. Both the state’s share of royalties and profit oil can be taken in cash or in kind, meaning Lebanon could ask for delivery of actual quantities of oil or gas for domestic use or to sell on its own if the country feels it can do a better job marketing the resources than the companies extracting them. It is still too early to tell how Lebanon’s proposed oil and gas fiscal policy stacks up compared to other global producers; however, what is clear is the country is not deviating from international norms. Given that two important streams of revenue are subject to competitive bidding, a full evaluation of Lebanon’s system will be much more feasible once we see how much the country earns.