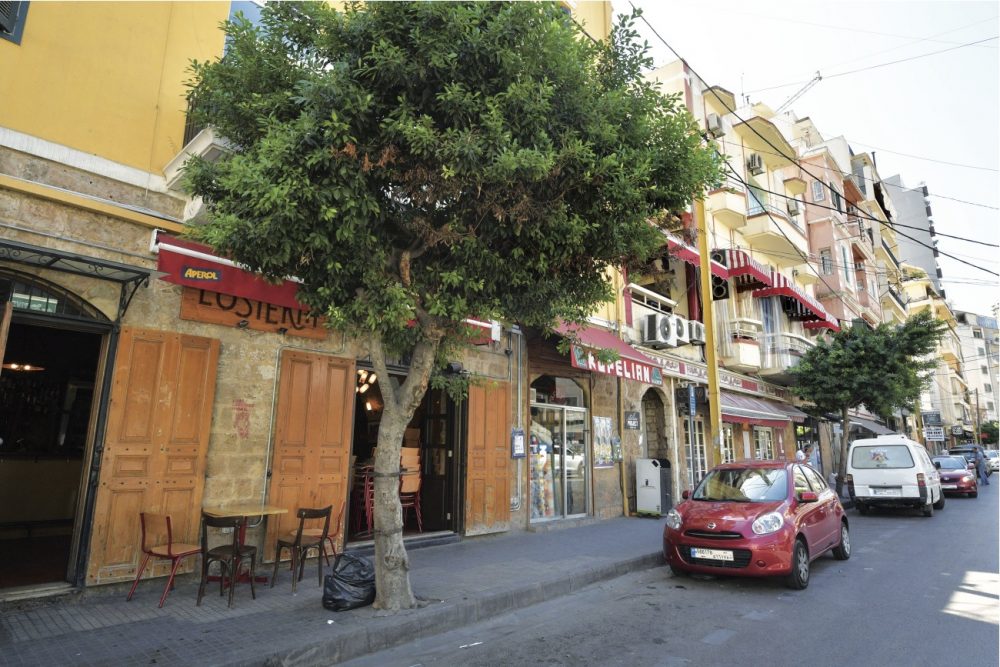 In just a few years, the area of Mar Mikhael has gone from being a small industrial neighborhood to Beirut’s nightlife destination par excellence. Today, Vogue magazine’s recommendations for “Four Perfect Days in Beirut” are mostly centered around Mar Mikhael and its vicinity.

Yet, it is important to contextualize and study such changes without taking them at face value. In partnership with GAIA-Heritage, the Issam Fares Institute for Public Policy and International Affairs at the American University of Beirut hosted a workshop for graduate students from Sciences-Po Paris and the Masters in Urban Planning and Policy program at American University of Beirut to study the creative industries and the changes that occurred in the neighborhood over the past seven years. The collaboration was held under the Social Justice and the City Project at the institute, and the workshop findings were synthesized into two publications: Linking Economic Change with Social Justice in Mar Mikhael and Creative Economy, Social Justice, and Urban Strategies: The case of Mar Mikhael. The narrative on Mar Mikhael below uses the data generated from these reports, unless otherwise stated.

Boom comes at a price

Mar Mikhael does possess a unique social and urban fabric. For the past 50 years, the predominantly Armenian quarter was characterized as a closely knit communal fabric, dominated by light industries. According to a study by GAIA-Heritage, the arts, crafts and design (ACD) community started relocating to Mar Mikhael in early 2007 after designers, architecture firms and art galleries were pushed out of Gemmayzeh due to soaring rent prices. Just down the street, the ACDs were attracted to the area’s affordable rents and proximity to industry suppliers such as carpenters, mechanics and masons. Predictably, restaurants and bars followed in late 2010. On Armenia Street alone (the neighborhood’s main thoroughfare), more than 20 new bars and restaurants have opened their doors since 2012. For many, that meant a boom in economic activities which attracted young professionals to an affordable urban lifestyle that provides access to nightlife, restaurants, art and cultural activities. Sammy, who moved to Mar Mikhael around five years ago, sees that due to “the shifting identity [of the neighborhood], no one can ever call it their own.”

The neighborhood slowly started attracting new, state-of-the art projects from the real estate sector. Architecturally, low-rise buildings of no more than five stories mostly built in the 1950s–70s dominate Mar Mikhael, rendering potential construction a lucrative business. Since 2013, three new high-rises were constructed and five more are under construction, while 20 new building permits have been issued for the neighborhood in total.

[pullquote]Continuous unplanned development will only make the neighborhood feel nondescript, stripping it of what made it attractive to begin with[/pullquote]

However, Mar Mikhael’s story can also be told from another perspective. The neighborhood’s 20,000 residents are mostly above the age of 55 and 51.8 percent of them are renters who mostly benefit from old rent-controlled rates, compared to a national average of 29 percent. For these long-term elderly residents, the boom means displacement without any real alternatives. The flourishing service economy and nightlife have translated into the encroachment of valet parking into every possible spot. Sidewalks are transformed into crowded places rendering their already challenging accessibility to the neighborhood even harder. Interviews with long-term residents and shop owners reflect both economic and social loss. For instance, a hairdresser in the neighborhood said that he has lost between 700 to 900 clients since 2000. Another home appliance shop owner hopes that he can sublet his shop to a restaurant since he no longer has many customers. Other residents have felt pressured to evacuate their apartments and seek refuge in their village residencies, places where many have never lived.

Trauma for the locals

Marieke Krijnen, a postdoctoral scholar at Orient Institut Beirut whose research focuses on capital investment in Beirut’s built environment and who led the workshops, argues that “ultimately it is a political choice and some people might say it is not realistic to only view an area in terms of its social function.” She goes on to lament the traumatizing effect that displacement can have on long-term residents of the neighborhood, as well as the physical and economic effects. “These people are socially embedded and have many claims to the neighborhood, yet the legal framework recognizes none of these claims because perhaps they don’t own their apartment, or they don’t own a large enough share of it,” she says.

Many criticize this counter-narrative as the result of nostalgic longing that halts the development of cities. Cities are, by nature, dynamic and any attempt to offer a static solution would only decrease a city’s competitiveness in the global economy. However, the debate does not have to paint such a black or white narrative on urban development. In fact, under the Social Justice and the City Project at the institute, led by Professor Mona Fawaz, we launched a series of workshops to discuss the proper planning and policy tools that foster economic activities in the city without excluding and uprooting the most vulnerable. We also acknowledge that it is these communities who predominantly created the attractiveness and uniqueness of the neighborhoods. Continuous unplanned development will only make the neighborhood feel nondescript, stripping it of what made it attractive to begin with. There are several available tools for Beirut’s municipality, planners and real estate developers that can offer a vision of the neighborhood that is fair for everyone. They range from modifications to building regulations, re-zoning and protecting local heritage sites, to reutilizing Mar Mikhael’s abandoned train station.

These challenges are a reflection of the competing visions of Beirut’s future and who lives to tell the stories of neighborhoods.