Public healthcare on the brink

Strained system struggles to cope with influx of Syrian refugees

The Lebanese healthcare system is straining under pressure from Syrian refugees

“I don’t know how no public hospitals have shut down until now. I am very surprised they are all still open.” So says Walid Ammar, director general of Lebanon’s Ministry of Public Health (MoPH) for the past two decades. He argues that the scale of the Syrian refugee influx in the past two years — at nearly a million registered (roughly 25 percent of the Lebanese population) — has stretched the sector to the point of collapse.

While Ammar could perhaps be prone to overstating the scale of the problem when talking to the media, health sector and economic experts agree that the crisis in many parts of the healthcare system is acute. In a study conducted last year, the World Bank concluded that “the increase in demand for health services caused by the Syrian conflict is straining Lebanon’s health system.” In total, the report said, the additional financial burden of healthcare on the state from the beginning of 2012 until the end of 2014 will reach at least $92 million.

Fouad Fouad, a Syrian professor of health at the American University of Beirut, agrees hospitals could face bankruptcy, and expects that unless additional support is forthcoming, ministers in the newly formed Lebanese government could scale back support for Syrians. “I think either hospitals could close or they could even stop Syrians from entering public hospitals,” he says.

Government officials may find it simple to blame the Syrian refugee influx alone for the crisis in the public healthcare sector, but the sicknesses in the system date back to before the first flag was raised in anger against Syrian President Bashar al-Assad.

The purely public sector has long been underfunded, as the MoPH has often preferred to support private institutions. Wealthier Lebanese generally have private healthcare insurance.  Public hospitals are thus only a small fraction of the healthcare sector in Lebanon — representing 20 of the country’s 163 hospitals and around 15 percent of the hospital beds, according to a 2013 Banque Bemo report. In 2011 the MoPH received just 2.7 percent of the government’s budget. 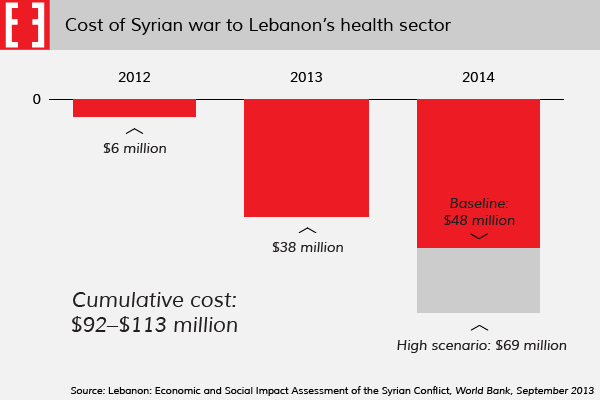 Yet this reliance on the private sector belies a desperate need. According to the 2007 National Survey of Household Living Conditions, 51.7 percent of Lebanese people have no healthcare insurance at all — thus leaving them in theory under the responsibility of the MoPH. Uninsured patients are supposed to pay 5 percent of the bill in public hospitals and 15 percent in private ones, with the ministry covering the rest.
For decades, however, these payments have been either severely delayed or not forthcoming at all — pushing the cost burdens entirely onto the hospitals. As such, many institutions have been saddled with crippling debts. Private hospitals have been able to counterweight this with fee paying customers, something impossible for public bodies. “It was the case before the influx of the Syrians — [public hospitals] have always been in debt as the government is unable to pay on time,” Salim Adib, a professor of epidemiology and public health at the Lebanese University, says. “Now there is an additional critical burden [with the Syrian refugees] so it has become more acute.”

Angelina Eichhorst, EU ambassador to Lebanon, agrees that successive Lebanese governments have failed to provide sufficient funding for the healthcare sector. “It is a problem that goes back before the [Syrian] crisis. If you look at public hospitals, there is an under-funding issue,” she says.

Coping with the Syrian influx

Onto an already bust system have been thrust nearly a million registered Syrian refugees. While primary healthcare for them — largely simple processes including medication, medical tests and consultations — has often been dealt with directly by UNHCR and affiliated charities, secondary healthcare — more complicated responses to diseases that usually involve hospitalization — has had less direct support from international organizations. Indeed, UNHCR literature stresses that they “prioritize primary health care, so as to decrease the reliance on secondary and tertiary health care services.”

Until December last year, the NGO International Medical Corps (IMC) was responsible for the admission and payment for those hospitals that treated Syrian refugees. Colin Lee, country director of the charity, explains the scale of the growth. “Before 2011 we had about 140 cases a year from the Iraqi [refugees from the 2003 war]. In the whole of 2012 we had 2,500 cases through the hospital system, then in December 2012 the numbers of Syrians [in Lebanon] went through the roof and we were averaging over 2,600 cases a month last year.”

Payments for these treatments, he says, took place three months after the operation on average. And for hospitals trying to balance books, a decision by UNHCR in the middle of the year made it even harder; as funding has consistently been lower than expected, the agency reduced the share of Syrian refugees’ hospital bills they pay from 85 to 75 percent.

In theory, the hospitals are supposed to demand the remaining 25 percent from the Syrians themselves but Lee admits that in practice many have given up. “The hospitals very often will waive [the 25 percent] and take the hit on that,” he says.

More fundamentally, as UNHCR’s support is defined strictly for life-saving operations, including childbirth, many longer-term diseases are not covered at all. MoPH’s Ammar gives the example of dialysis as a form of treatment that is not supported by the international community but which the Lebanese state offers to refugees. He says that just dialysis treatment for Syrians is costing the Lebanese public health sector $1.3 million a year.

He points out that private hospitals can turn people away if they cannot pay for services, but public hospitals cannot. A 1991 agreement between Lebanon and Syria pledges “the highest degree of cooperation and coordination” on health matters. In practice this has meant Syrians have usually been able to access services in Lebanon on the same terms as the local population.

The largest public healthcare institution in the country is Rafik Hariri University Hospital — founded in 2004. The body has long been rocked by financial concerns, as well as allegations of corruption. In recent months it has been short on key medications, and embroiled in ongoing disputes with staff over pay. 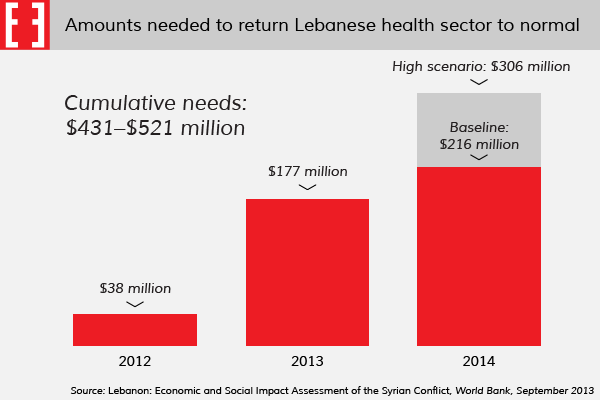 Ammar accepts that the institution was not perfect before the crisis, but argues that the treatment of Syrian refugees has directly increased its deficit by $6 million. Executive was not able to independently verify Ammar’s figures.

Putting the system back to together requires, as ever, plenty of the green stuff. The World Bank report says that merely to return the healthcare system to the same quality as it was before the crisis would cost $431 million. This includes both the public and private sector. Ammar certainly agrees that international actors should do more to support such plans. “The international community is responsible [for the Syrians],” he says. “We need more support from them.”

Unfortunately, there are justifiable concerns on the part of international donors that make them hesitant to back the system. A recent report from the British think-tank Chatham House found many donors thought state institutions were too corrupt to manage funds effectively, and charity heads are often loath to go through bureaucratic and non-transparent state bodies. This, coupled with the fact that the country went eleven months without a government, has reduced the potential willingness to provide monetary assistance.

This reluctance to back the government financially has been patently clear in funding trends. In a joint appeal for 2013, UNHCR and the Lebanese government asked for more than $1.6 billion to support Syrian refugees in the country. The UN’s nearly $1.2 billion was 44 percent funded, but the $450 million that was supposed to go to the government directly received no funding at all.

International charities have built parallel systems — either supporting pre-existing private institutions or directly setting up their own healthcare networks. AUB’s Fouad thinks that the longevity of the crisis means a shift away from this is now needed. With the scale of the destruction in Syria now enormous, even if the war were to end it is clear that the majority of refugees would likely remain in Lebanon for the foreseeable future. “[Ignoring the public sector] is a vicious circle. You can’t give public hospitals money as they are inefficient and corrupt, but without money they can’t do the services they need to,” he says. “We need to change this approach.”

There are early signs that international players are reaching the same conclusions. Last month, British ambassador Tom Fletcher took to the social networking site Twitter to announce that they were seeking to offer more support directly to Lebanese public services.

Amanda McLoughlin, Lebanon development representative of the UK’s Department for International Development, says that they will seek to refocus their support to help local systems. She admits that there has perhaps been too much going around the government in the desperate rush to aid Syrians fleeing the civil war. “By setting up parallel systems you therefore do undermine a national system. We see that in every part of the world that we work in and we try to avoid doing it over the long term,” she says. “In humanitarian crises you have to set up parallel systems over the short term, but to try and continue that model is not good for the host country.”

The alternative way to reduce the burden on the state would be to cut back on services that are offered to Syrians. This is extremely difficult in a situation where many have nothing at all and where a few dollars can make a huge difference. Yet IMC’s Lee thinks that three years into a crisis that has had a negative impact on Lebanon’s poorest, the need to normalize healthcare services to make them fairer for local residents, especially those hosting refugee populations, is great.

“A lot of people have paid lip service to this host population idea but little [has happened]… Some refugees receive free consultations and medications, others have a nominal fee of $2, but poor Lebanese people have to pay $6,” he says. “100 percent provision of free services is not sustainable and it is sending out the wrong message to the Lebanese. We have to do a bit more for the Lebanese population and the health sector is one area where we can do that.”

AUB’s Fouad agrees that the Lebanese state is carrying too much of the burden. “There is a need to change the mechanism of how to accept Syrians. We need to change the policy of support among Syrian refugees that means to support the Ministry of Health rather than NGOs and private hospitals. This is one option that is being discussed. We all know this is a long lasting crisis and to just keep fueling the private hospitals and NGOs is not going to be the solution.”

In recent months, Lebanon has sought, without much success, increased funding from the international community. The recent Paris-based meeting of the International Support Group for Lebanon achieved many proclamations of support, but few real pledges.

Whether or not we will see the first Lebanese public hospital going bankrupt in the coming years is likely to depend less on the actions of the new government in Beirut than on those outside. While the Lebanese government could do more to assuage doubts by cracking down on corruption and inefficiency, ultimately more funding is needed from outside sources to keep the health care system’s heart ticking.

Trading in an unpredictable region