Officials went to Paris in early April to pitch an infrastructure investment plan for Lebanon to the international community at the CEDRE conference. The pitch was generally well received by donor countries and multilateral institutions, who pledged $11.3 billion in low-interest loans for infrastructure projects on the condition that Lebanon check reform boxes on the loan application.

The Capital Investment Plan (CIP) is a multiyear investment strategy aimed at rehabilitating Lebanon’s dilapidated infrastructure. The CIP is valued at $17 billion over the next seven years and includes some 250 projects—in water, wastewater, solid waste, transport, electricity, telecommunications, and infrastructure for tourism and industry.

A statement from the International Monetary Fund at CEDRE said CIP would raise $1.6 billion annually over the next decade, mostly from the loans provided by the international community. More money—about $5 billion according to the CIP—could come in the form of private financing via public-private partnerships. The CIP also says the Lebanese state would contribute about $2.3 billion over the next seven years, despite a reduction of 12.6 percent in capital expenditures in the 2018 budget (see budget story and infographic).

A joint concluding statement by Lebanon and France at the conference said that donors and multilaterals had promised $10.2 billion in loans and $860 million in grants. The prime minister’s office did not respond to a request for a list of the pledges made at CEDRE, and a spokesperson told Executive in mid-April that the office had not received the official terms and conditions attached to the pledges. At a news conference on April 11, Prime Minister Saad Hariri said: “Most of these loans are very soft loans with interest of 1.5 percent maximum, with a grace period of seven to 10 years, and a maturity period that exceeds 25 years.”

Total pledge figures compiled by Executive from media reports and available donor statements were a little different from what the government stated. The CIP projections were drawn from reading a version of the plan published on the website of the Presidency of the Council of Ministers.

The loan money pledged—the $11.3 billion—could be unlocked if the Lebanese state follows through on reforms including a reduction of the deficit by five percentage points of GDP over five years, primarily by improving tax collection and reducing government subsidies to the failing public utility, Electricité du Liban. Another $384 million was promised by donor countries as grants.

Multilateral agencies together pledged Lebanon loans that could be worth up to $8.3 billion, while donor countries promised another $3 billion.

The World Bank Group offered the largest loan at $4 billion over five years, according to a statement made at the conference. The International Bank for Reconstruction and Development said it would provide $500 million per year over the same period, with a similar amount for the same duration coming jointly from the International Finance Corporation and Multilateral Investment Guarantee Agency. The statement promised to raise another $200 million per year in loans to support Lebanon’s host communities and refugees. 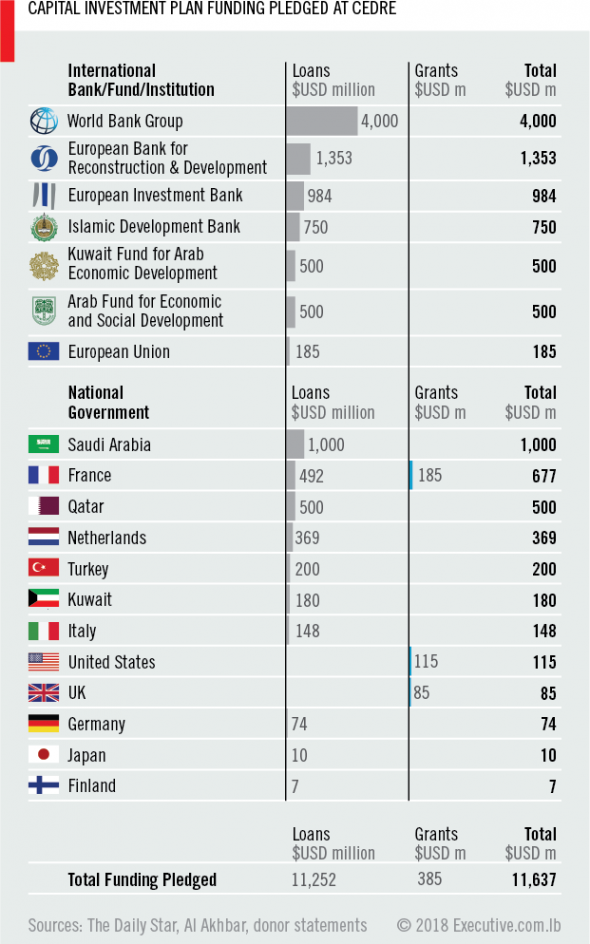 The European Bank for Reconstruction and Development (EBRD) promised the next largest loan valued at almost $1.4 billion, while the European Investment Bank (EIB) pledged around $1 billion. EBRD gave no statement describing the contents of its loan while EIB’s statement did not detail conditions or disbursement. 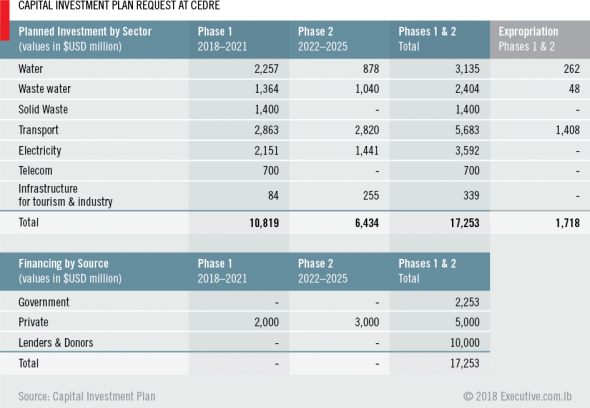 As for donor countries, Saudi Arabia said it would reinstate a $1 billion credit line that Reuters reported in 2014 was intended to support the Lebanese Armed Forces. At CEDRE, several countries promised loans, including Qatar ($500 million), France ($492 million), the Netherlands ($369 million), Turkey ($200 million), as well as the European Union ($185 million). In addition to the loans pledged, France said it would give Lebanon $185 million. The United States and the United Kingdom offered no loans but promised $115 million and $85 million in grants, respectively.

Budgeting for the future