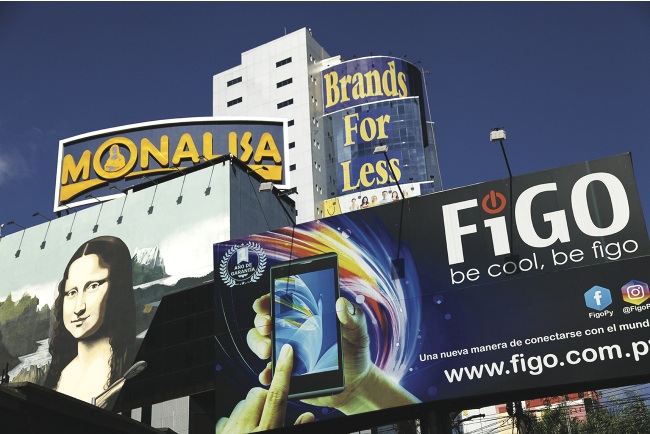 There is a thin line between fact and fiction in discussions of the Triple Frontier, a border area between Paraguay, Argentina, and Brazil that is rumored to be a Hezbollah hotspot. More than one year has passed since US President Donald Trump stood on the White House lawn and promised an answer to the “menace” of Hezbollah. The Americans have long had Hezbollah in their crosshairs, but the change in occupancy at the White House brought expectations of a change in strategy. Instead, the US has renewed its focus on disrupting alleged Hezbollah financing networks by profiling  the Shiite diaspora in Latin America.

“Brazilian police arrest alleged Hezbollah financer,” read a Reuters headline on September 21. Lebanese-born businessman Assad Ahmad Barakat was taken into custody after an arrest warrant was issued against him by the Paraguayan authorities for “declaring an incorrect nationality and omitting information about loss of nationality.”

Argentinean authorities also accused the 61-year-old of attempting to launder $10 million through a casino in Puerto Iguazú, a city in Argentina. According to the US Treasury Department, Barakat is “a high-ranking Hezbollah financier” and one of the organization’s “most prominent and influential members.”

Numerous publications around the globe ran the Reuters story. Some, however, omitted the term “alleged.” A crucial term, since everyone should be presumed innocent until proven guilty, and  especially so in the case of Barakat—he has seen and heard it all before.

Following a series of reports portraying him as Hezbollah’s main operative in South America, he spent seven years behind bars in Paraguay for tax evasion.

“Every year or two we are confronted by a wave of allegations about Hezbollah and the terrorist threat in the region,” says Ali Farhat, a Lebanese businessman and part-time journalist who has lived in the Brazilian state of Paraná for some 18 years and works in the city of Ciudad del Este, across the border in Paraguay. “We are tired of it.”

“The latest charges against Barakat are just ridiculous,” Farhat says. “The authorities claim his Paraguayan passport was canceled 15 years ago. Hence, the charges. Yet he has worked in Ciudad every day since he was released from prison without any problems. Local police now say they were never notified Barakat’s passport had been canceled. I am convinced it is the same story all over again.”

In 2009, Farhat co-authored a book in Portuguese called “Terrorista por Encomenda” (Terrorist to Order), in which he and Brazilian researcher Fernanda Regina da Cunha Giulian investigated Barakat’s first conviction and the way in which he was made a symbol in the global war on terrorism.

Born in 1967, Barakat left Lebanon for Paraguay in 1985. By then one of his brothers had been killed in the civil war, while the other was running a small car repair shop. The youngest of the three, Barakat was determined to carve out a better future abroad. He opted for Paraguay as it offered one of the few visas easily obtainable by Lebanese. Gradually he built up a business, which primarily imported electronics from China.

“The problems started with a commercial dispute in the late nineties,” says Farhat. “Barakat had secured the rights to a popular electronic game (Brick Game), which a well-connected competitor had also wanted. It is then that the Hezbollah accusations were first heard.”

These accusations resurfaced in 2001, shortly after 9/11 and George W Bush’s announcement of the “Global War on Terror.” On October 6, 2001, the Paraguayan daily Ultima Hora ran a story reporting that the Paraguayan authorities eyed Barakat as the “alleged head of Hezbollah fundraising and the principal agent of Holy War in the Triple Frontier.”

This turned out to be only the opening salvo in a relentless media campaign. Citing anonymous government sources and experts, numerous other publications followed the tone set by Ultima Hora and with every published article, Barakat became synonymous with Hezbollah.

Farhat is convinced Barakat got caught in a perfect storm. He argues that despite the original accusation of Barakat’s links with Hezbollah being motivated by a business dispute, the media became enamored with the story of Hezbollah and terrorist financing, while the authorities were keen to prove their worth in the emerging global war on terror.

Brazilian police eventually arrested Barakat in Foz do Iguaçu, the city in which he was living, on June 22, 2002.  Although they admitted to having “nothing on him,” they extradited Barakat to Paraguay on November 17, 2002.

He stood accused of financing Hezbollah by selling counterfeit products, drugs, and even arms, but was ultimately sentenced to seven years behind bars for tax evasion.

“They did not have any evidence,” Farhat says. “Barakat owned video material of Hezbollah fighters training or in action against Israel, and he had made some donations to the Al-Shahid Social Welfare Association. Very general stuff. So, in the end they could only convict him for tax evasion.”

Another major question emerged when Barakat was released in 2009. Hezbollah’s alleged leading man in South America, now shorn of his supposed cover, did not return to Lebanon to receive a hero’s welcome. Instead Barakat returned to his Brazilian wife and three sons in Foz, where he lived, away from the limelight, until his arrest on September 21.

A lack of evidence

This does not mean Barakat definitely did not act on behalf of Hezbollah. He might have. But it was never proven. The US Treasury Department, however, still lists him as a “high-ranking Hezbollah financier,” and one of its “most prominent and influential members.” Barakat’s only conviction—tax evasion—is not even mentioned, while media-fuelled suspicion is presented as fact.

South America expert Christopher Sabatini, adjunct professor at the School of International and Public Affairs at Columbia University and executive director of the non-profit organization Global Americans, declined to comment about the Barakat case specifically, as he was not fully versed on the details. However, he says he has been “closely following the dossier on the alleged presence of Hezbollah and other Islamic or terrorist organizations in the Triple Frontier since the mid-1990s, and so far there has not been a single case that proves the many wild accusations that have been made since.”

These “wild” accusations include but are not limited to: Hezbollah running training camps in the Paraguayan jungle, Hezbollah cooperating with Al-Qaeda to prepare attacks on American soil, and Hezbollah being in bed with Primeiro Comando da Capital, Brazil’s largest and most notorious criminal organisation.

Barakat is not the only alleged Hezbollah operative to be arrested in the Triple Frontier. In June 2010, Paraguayan police arrested 37-year-old Moussa Ali Hamdan for providing “material support to Hezbollah.” He allegedly transferred to the group the proceeds from the sale of stolen goods, including cellular phones, laptops, Sony Playstation 2s, second hand cars, and counterfeit Nike shoes.

In 2013, 30-year-old Wassim Fadel was arrested for sending a 21-year-old Paraguayan girl to Europe with 1.1 kilograms of cocaine in her stomach. She was arrested in Paris. The media immediately portrayed Fadel as Hezbollah’s very own Pablo Escobar in Paraguay. 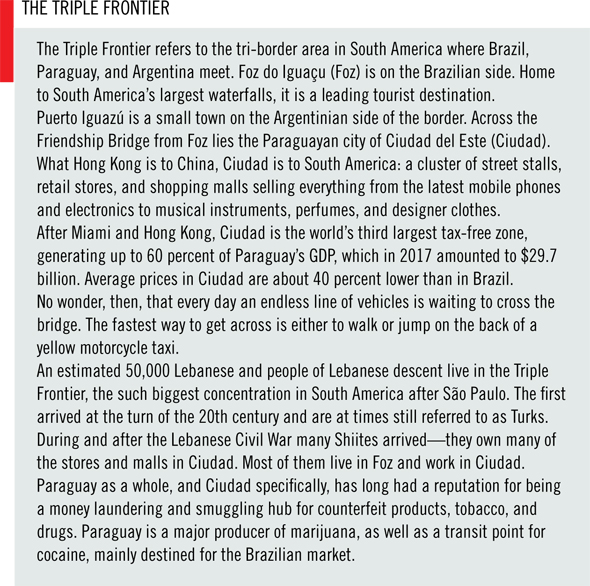 “But these cases are peanuts,” Sabatini says. “If Hezbollah were to smuggle cocaine, would they really be interested in one kilo? Would they not send a container?”

Other elements in these stories about alleged Hezbollah activity do not add up. Hamdan was a dual citizen of the US and Lebanon living in Pennsylvania. He only entered the alleged Hezbollah financing scheme after being offered stolen phones by an undercover FBI agent. He even bought two fake passports from the same cop to settle an outstanding debt.

Regarding Fadel, Paraguayan police claimed that he had transferred funds to bank accounts in Istanbul and Damascus, which were owned by “Hezbollah members involved in the group’s financial operations.” The allegations are very specific, yet the names were never released.

Fadel had become a fugitive in 2008, when customers of his car parts company in Paraguay filed a fraud complaint. Would a Hezbollah kingpin really have been trying to make an extra buck by selling fake car parts?

“I’ve talked to several intelligence officers over the years and among them there seems to be a consensus that drug trade and money laundering in South America are not central to Hezbollah operations,” Sabatini says. “Let alone that the continent is used as a platform to train fighters and launch attacks on the US.” And if this were the case, US intelligence would presumably know. “Numerous State Department, Central Intelligence Agency, and embassy investigations have scoured the area so much that it must be one of the most studied areas by the US intelligence community in the Western Hemisphere,” Sabatini adds. It should not come as a surprise then, that the US embassy in Paraguay has downplayed the suspected Hezbollah presence in Ciudad. In 2007, Wikileaks published a US diplomatic cable acknowledging that illicit activities “including trafficking in drugs, arms, and counterfeit goods, as well as document fraud and money laundering” had taken place in the Triple Frontier, but also states: “Hezbollah has a small, direct, non-operational presence on the ground, but most Lebanese in the Tri-Border Area are Hezbollah sympathizers, if not financial supporters.”

The cable specifically refers to the donations made at the Shiite Mosque of the Prophet in Ciudad. Local Lebanese, however, swear these donations are only used for projects such as the local school. But even if some are sent to Lebanon, some sense of proportion is necessary. The same US cable mentions how in the Merchants Bank/Valley National Bank case, $3.7 billion was moved from the Tri-Border Area through the United States. Another case involved New York financial service provider Beacon Hill, which moved $13 billion in six years through 40 different JP Morgan/Chase bank accounts. Beacon Hill was successfully charged as an unlicensed money transmitter, while JP Morgan/Chase paid a hefty fine.

Another US cable published by Wikileaks concerns Paraguayan bank Banco Amambay and claims “80 percent of money laundering in Paraguay moves through that banking institution.” The bank is owned by Horacio Cartes, (the man the DEA suspects of cigarette and cocaine smuggling), who from 2013 to 2018 served as president of Paraguay. 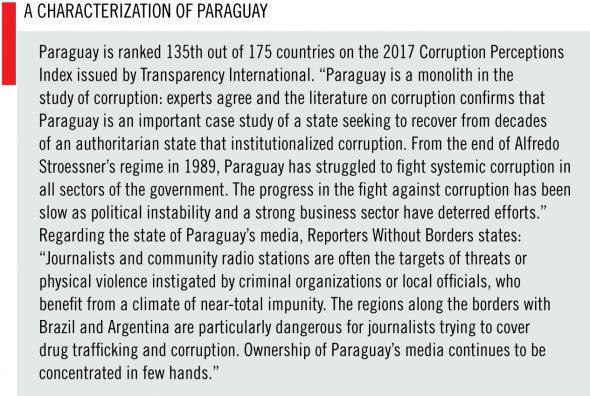 “I have the impression the Hezbollah and terrorist threat in Ciudad del Este is predominantly a political issue,” says Sabatini. “It is a way for Latin Americanists and other parties to get the attention of the White House. That could concern defense budgets, jobs, or the conflict between Israel, Hezbollah, and Iran.”

So, why did the Paraguayan authorities again issue an arrest warrant for Barakat on the rather vague grounds of “declaring an incorrect nationality and omitting information about loss of nationality?” The clue lies in timing. The warrant was issued shortly after the inauguration of Paraguay’s President Mario Abdo Benítez on August 15. Paraguay is a close US ally and a participant in the State Department’s (lucrative) Antiterrorism Assistance program. Could it be that the 46-year-old newcomer merely aimed to offer a gesture of goodwill toward the White House?

We may never know for sure. What we do know is that some 50,000 Lebanese live and work in the Tri-Border Area, who are currently  all tarred with the same brush. The flurry of allegations from US and Israeli politicians, the media, and think tanks about Hezbollah’s alleged links in South America since 2001 has been relentless, and so far backed up by very little proof. There will be bad apples among the Lebanese in the region. Some may operate on behalf of Hezbollah. Yet, there is little doubt that the vast majority of these people left Lebanon to have a better future. Many succeeded and have helped make Foz and Ciudad into the tourism and shopping havens they are today.

And among these expats is Assad Barakat, who remains in custody awaiting possible extradition to Paraguay. Is he a Hezbollah financial mastermind, as some have claimed for years? Or is he an innocent father of three? One thing is certain: It will matter little when he is extradited—the story will no doubt repeat itself.