The Syrian refugee crisis in Lebanon

In 2018, the Syrian popular uprising-turned-civil war entered its eighth year, and so did Lebanon’s refugee crisis. This past year was critical for Lebanon. Not only did the country hold its first parliamentary elections since 2009, it also saw decreased funding for refugees, a highly controversial policy by the country’s General Security to return refugees to Syria, and ongoing tensions between the foreign ministry and the United Nations High Commissioner for Refugees (UNHCR) over refugee returns.

With Lebanon hosting, globally, the largest number of Syrian refugees per capita (only Turkey hosts more in absolute terms), it came as no surprise that international aid was more readily supplied during the early years of the conflict. This aid came in the form of not only direct assistance for Syrian refugees, but also funding to help the Lebanese government mitigate the impact of the refugee crisis on its infrastructure and economy. However, as the conflict in Syria drags on, international donations have stagnated.

In fact, the 2018 funding gap for UNHCR in Lebanon is its worst so far. Despite the need steadily rising, this year UNHCR received just $887 million out of a required $2.68 billion. Factoring in a sum of $310 million that carried over from 2017, the total secured funds amounted to only 45 percent of the required funding for the year.

This is not the first time that UNHCR in Lebanon has received less than 50 percent of its required funding. Need is outpacing willingness to donate. In recent years, from 2015 to 2017, UNHCR in Lebanon received roughly $1 billion per annum, but the funding gap has continued to widen. This situation looks set to continue, with the aid requirements of refugees and their local host communities—many of whom reside in impoverished areas—not diminishing.

Lebanon is not alone in coping with the refugee crisis. Jordan and Turkey are also hosting large numbers of Syrians and must contend with shortfalls in international aid. Unfortunately for all the host countries in the region, key donors are continuing to cut foreign aid. The Trump administration recently pulled US funding for UNRWA and is having second thoughts over their Syria aid program, redirecting more than $230 million  earlier this year. Meanwhile, Turkey and the EU continue to squabble over the implementation of the 6 billion euro ($6.8 million) aid package signed in 2016.

Going forward, the cuts to US foreign aid under President Donald Trump will have adverse effects on struggling aid and assistance initiatives. In 2017, the US was the largest single state donor by far, providing $1.45 billion to UNHCR. Germany was the next largest, at roughly $477 million.

Given that these funding gaps have existed since 2012, it should come as no surprise that there has been little marked improvement in the socioeconomic conditions of refugees, despite years of aid. In a 2018 update to the UNHCR’s refugee response plan for 2017 to 2020, the agency stated that more than 76 percent of Syrian refugees live below the poverty line, set at $3.84 per day. A whopping 87 percent of them are in debt, with the average debt amounting to $798 per person. Syrian refugees incur significant costs—for example, 18 percent of average monthly expenditure goes toward paying rent, often for overcrowded housing. Meanwhile, food is the largest monthly expenditure, at 44 percent, and accounts for the greatest proportion of debt.

Although the financial situation of Syrian refugees in Lebanon is dire, a thin, unexpected silver lining presents itself in the form of the continued improvement in the performance of the Lebanese health sector. A study by the American University of Beirut, the World Bank, and Lebanon’s Ministry of Public Health (MoPH) revealed that not only has the sector shown resilience during the refugee crisis it has even improved. Walid Ammar, the director general of the MoPH, told Executive in July that public and private health institutions continue to improve in light of the ongoing circumstances.

Meanwhile, the World Bank continues to oversee several projects in collaboration with the state to create more jobs in an attempt to alleviate poverty. The Creating Economic Opportunities program was established prior to the refugee crisis, and original projections sought to create some 52,000 jobs for Lebanese people over a 15-year-period. However, Zeina Khoury, a private sector specialist at the World Bank, told Executive in September that beneficiaries now also include 3,000 Syrian refugees who are to receive training—but not job placement support or wage subsidies—in sectors in which Syrians have the legal right to work in Lebanon. The program has yet to be formally adopted by cabinet and Parliament.

In any case, the sectors in which refugees are allowed to work are extremely limited. And it appears that UN agencies are anticipating further cuts to their aid programs designed to ameliorate the refugee crisis. In a meeting with the Ministry of Social Affairs in October, it was confirmed that UNICEF would discontinue their cash for education programs for refugee students due to insufficient funding. Around 13,000 households will be affected by this measure.

With diminishing funding, the government suspending UNHCR’s ability to register new refugees in 2015, and severe labor restrictions, the socioeconomic wellbeing of Syrian refugees in urban and rural areas is unlikely to improve in 2019. It appears that refugees will continue to rely on borrowed money for subsistence. These unsustainable conditions could also be a catalyst for some to take the risk of returning to Syria, despite the lack of a political solution to the conflict.

Since last spring, General Security has been publicly documenting countrywide refugee returns organized in coordination with Syrian security and government officials. Photo handouts show refugees crowding around white buses provided by the Lebanese state, or the all-too-familiar green buses synonymous with war-time population transfers in Syria. According to statements released by General Security, the buses cross into Syria mostly through the eastern Masna and northern Abboudieh border crossings, with some buses utilizing the al-Zamrani crossing near Arsal.

The number of Syrians who have chosen to voluntarily leave Lebanon is disputed. Despite the presence of a UNHCR representative to monitor returns, confirmed by both General Security and UNHCR Lebanon Representative Mireille Girare, numbers differ between the two organizations. A General Security statement from early November stated that 87,670 Syrian refugees had returned from Lebanon since July. This statement broke down the number of returns into those who had gone back through a General Security return program (7,670) and those the statement said had returned on their own (80,000). This cleared up some confusion that had existed in the local press, as previous statements from General Security had provided breakdowns of their own returns program and an overall total that was much higher, without explaining the discrepancy.

Nevertheless, the overall number of Syrians returned is still disputed, despite the November statement from General Security. Lebanon’s caretaker State Minister for Refugee Affairs Mouin Merhebi claimed in a November interview with AP that only 12,000 Syrians had returned to Syria. Meanwhile, UNHCR tallied 3,100 returns as of October this year, though UNHCR spokeswoman Lisa Abou Khaled told The Daily Star that these figures represented individual returns, not refugees whose return was coordinated by General Security, and that there were additional “spontaneous returns” that UNHCR was not capturing.

Is Syria safe enough for refugees to return? Many Syrians have expressed concerns over security risks related to arbitrary detentions or forced military conscription by the Syrian army, its allies, or by opposition groups. There is also the question of the ongoing humanitarian and internally displaced people (IDP) crisis within Syria. In October 2018, the UN Office for the Coordination of Humanitarian Affairs documented over 64,000 displacements within Syria, mostly taking place in the Idlib and Aleppo governorates. The UN agency cited that the displacements were the result of Syrians seeking better security and humanitarian conditions. Human Rights Watch and other human rights organizations continue to document airstrikes on IDP camps and ongoing attacks against civilians by numerous forces on the ground. Merhebi also told AP that 20 Syrians had been killed after returning to Syria from Lebanon, but offered no concrete proof to the newswire, and rights groups monitoring the situation have recorded no deaths.

Though the government has not reached a consensus when it comes to the Syrian conflict and the refugee crisis, the foreign ministry continues to butt heads with UNHCR. In May 2015, the government ordered UNHCR to stop registering Syrian refugees. This left sponsorship by a Lebanese employer as the only option for Syrians to obtain legal residence, a difficult path given the need for wasta that colors such arrangements.

In June 2018, caretaker Foreign Minister Gebran Bassil froze the renewal of UNHCR staff residency permits indefinitely. A statement from the foreign ministry cited alleged “intimidation tactics” by UNHCR, which they claimed were aimed at scaring Syrian refugees out of returning to Syria, by notifying them about the risk of military conscription, the poor security situation, and the fact that returns have not been endorsed by the international community. Despite other ministers and government officials condemning Bassil for the unilateral freezing of UNHCR residency permits, the decision still stands. In response, UNHCR stated that they respect the right of refugees to voluntarily return and do not discourage returns based on “individual free and informed decisions.” 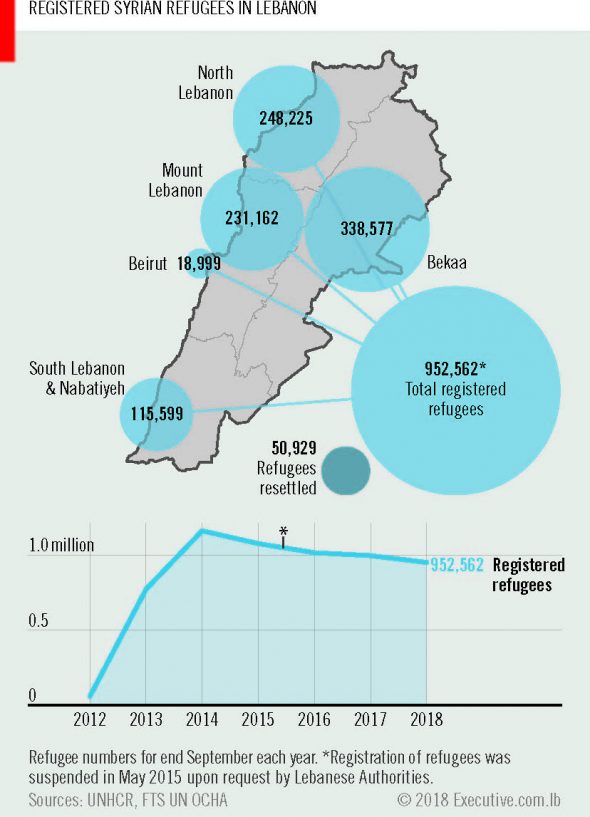 With Bassil expected to continue heading the ministry once a cabinet is formed, it is expected that relations between the two will continue to sour. President Michel Aoun, echoing his son-in-law Bassil, said in a November speech that there are forces “stagnating” returns by “intimidating” refugees, arguably pointing fingers at UNHCR and human rights organizations that have expressed concerns about refugee returns at this point in time.

Given the circumstances, it seems the government’s current thinking is affecting the rhetoric coming from UNHCR and similar organizations. In a panel discussion at Saint Joseph University in Beirut in October, Girard appeared to downplay initial concerns about refugee returns to Syria, focusing instead on UNHCR’s role in ensuring their safety on Lebanese and Syrian territory. Meanwhile, Christophe Martin, head of the delegation of the International Committee of the Red Cross, told Prime Minister-designate Saad Hariri in November that the organization supports the return of Syrian refugees, if their security is guaranteed and the non-refoulement principle is respected.

Speaking from eastern Ghouta, near Damascus, the Danish Refugee Council’s Secretary General Christian Bach said in November that the reconstruction effort must get underway, given that many Syrians, refugees, and IDPs alike, are returning to the ruins that were once their homes. It is therefore likely that the narrative will continue to shift in 2019 to focus on the logistics of repatriation, rather than the legality and security of it.