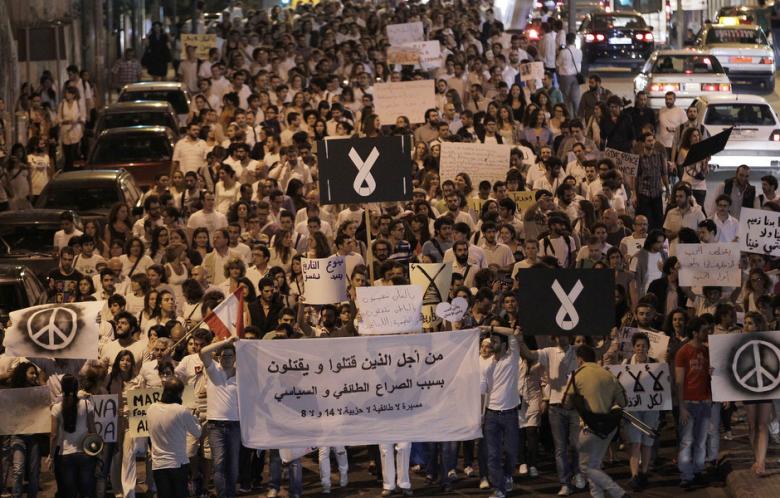 Lebanon is presented with the most serious challenges it has faced in the past decade. The economy is struggling, the internal security situation  deteriorating and the country’s neighbors pose real threats. Yet amidst everything, there are opportunities — not just in newfound offshore oil and gas but also within the country’s ingenious population.

As we head into 2013, what can be done to help the country unite, to overcome its challenges and ultimately to grow? Over the course of this week, eight influential figures will address seven important topics, each suggesting one proposal to help the country move forward. In this final article, Nadim Houry from Human Rights Watch makes the case for an anti-discrimination law.

Buried deep in Lebanon’s Constitution is an often-neglected provision that was inserted at the end of the civil war in 1989. Article 95 called for a transitional period to abolish political sectarianism and cancel confessional representation in public service jobs, the judiciary, and security institutions. And yet, nearly a quarter-century later, not only has Lebanon failed to begin this transitional period but the confessional allocation of jobs has increased across all levels of public administration. Sectarian considerations have also become more common in private sector employment and in private dealings, such as real estate transactions.

Given the current level of political deadlock and sectarian tension, it is unlikely there will be any breakthrough during 2013 in terms of reforming or abolishing political sectarianism. But Lebanon could try to stem the sectarian drift in day-to-day life by adopting an anti-discrimination law requiring equal treatment of  all Lebanese in employment and in private transactions such as rental or purchase of homes. A temporary exception could be made in the law for the allocation of parliamentary seats and the highest-ranking positions in the state to take into account existing power-sharing arrangements in the Constitution.

Left unchecked, Lebanon’s sectarian dynamics have spread like a cancer across public administrations. Today, the simplest public appointment is subject to sectarian horse-trading with the predictable outcome that qualifications are rarely the main selection factor. Take the recent appointment of a six-member committee to oversee and regulate the oil and gas sector. Instead of focusing on expertise, the government focused on ensuring that the appointees came from the following six communities: Shia, Sunni, Druze, Maronite, Greek Catholic, and Greek Orthodox. Tough luck for any oil expert who may belong to the other 12 religious communities recognized in Lebanon.

Roudi Baroudi on the country’s oil and gas

Hicham Safieddine on the Syria spillover

Nada Zaarour on the green economy

Some municipalities have announced that they will prevent the sale of land and houses from Christians to Muslims in their areas by refusing to approve the transactions – a necessary condition for the new owner to be able to register the property. In July 2011, the Hadath municipality in Mount Lebanon even put up posters telling people not to sell their land or homes because the municipality would not approve the transactions. Not specified on the posters, but evident to local residents, the municipality was trying to stem the sale by local Christians to Shias, whose numbers in the area had increased.

These municipalities justify such discriminatory behavior by contending that it is essential to protect the community’s interests and that they want to preserve the “character” of the area. Landlords and employers often repeat such justifications when discriminating in their choices of tenants or employees. Many landlords prefer to rent to tenants from the same religious group. While they rarely express this outright, usually such landlords manage to ask a few questions at the onset to determine a potential tenant’s sect. The answer often affects the willingness of the landlord to rent to that tenant.

Such dynamics regularly are in play in the job market. While no statistics exist, anecdotes abound of employers rejecting applicants because of their religious background.

Regardless of their motivation, such practices have a real cost: they discriminate against citizens and contribute to the further ghettoization of Lebanon. The outcome is an increasingly divided population that interacts less and less across communal boundaries. Today, if you are a Christian, you will probably live, work, shop and dine in mostly Christian areas. The same can be said about Sunnis or Shias. The civil war may have ended but many front lines still exist.

Lebanon needs to start tackling this increasing ghettoization, which is directly contributing to divisions in the country. A new equilibrium is needed between promoting the interests of each religious community and  everyone’s right  to be treated equally. Pushing for equality for all is not just about individual rights, it is essential to building a state that is more than the sum of its religious communities.

This is why I hope that in 2013 Lebanon will adopt an anti-discrimination law. Such a law would not resolve sectarian problems on its own. But it would challenge the norm that it is acceptable for citizens to be treated differently based on their religious background. It would also provide a tool for a few dedicated lawyers to use the judiciary to start chipping at the walls of the ghettos that each community has built around itself. It may even begin to give meaning to another important part of Lebanon’s constitution, its preamble, which affirms equality of rights and duties among all Lebanese citizens without discrimination.