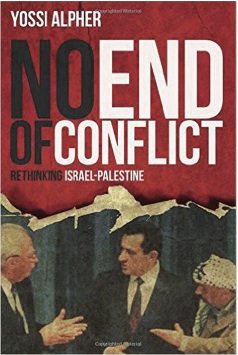 Yossi Alpher, a veteran of Israel’s intelligence services, starts “No End of Conflict” with a personal and emotional account of his role in an attempt to reunite two sisters from the Holy Land, separated since 1947 – first by their choosing different paths in life and later because of the new borders imposed on Palestine post-1948. Alpher describes attempts to bring the siblings back together; the messy details of the story seem unimportant compared to the grand political and diplomatic themes of the book, but even though a physical meeting between the sisters seems rather easy to arrange, the reunification never materializes. Heavy fears on both sides and actual threats made stand in the way – a metaphor for the lack of real peace and durable long-term relations between Israel and her neighbors, especially the Palestinians. Though not related directly to the core content of No End of Conflict, the tale of the two women sets the tone for the rest of the book, painting a dark picture.

After his description of several failed peace initiatives, Alpher argues that renewed attempts to achieve full-fledged final status peace agreements are merely symbolic dances that only show the ignorance or disingenuousness of the initiators, with the actors directly involved not serious about making peace and in some ways preferring the status-quo. If anything, these Oslo-style rituals are seen as actually deepening the conflict.

Israel is facing increasing international pressure over its occupation of the Palestinian territories, its treatment of Palestinians and its attitude toward human rights, as well as recent undemocratic tendencies within Israeli politics. This is further fueled by the growing influence of right-wing ideological, messianic and settler movements within the government, security agencies and state bureaucracy, making any possible peace deal that includes settlement withdrawal increasingly unlikely.

Alpher describes an overall situation emerging of an Israel-Palestine heading toward a binational state, in one form or another, with several unwanted and likely negative consequences. The author refuses to call the current situation apartheid but warns that this is the direction Israel is heading toward, with several actors  advocating racist, apartheid or quasi-apartheid policies. As key to integrating Arabs into a singular state, many on the Israeli right advocate a colonialist approach that includes “Westernizing” and “civilizing” the Arab population and improving their lives economically to encourage them to perceive their situation as superior to any alternative, even though the history of Israel-Palestine shows no indication that economic prosperity determines Palestinian attitudes.

Alpher is highly skeptical of further attempts for all-encompassing peace talks, deriding them as pathetic and unrealistic. According to him, it is time for a more pragmatic approach to managing the conflict and mitigating some of its most damaging effects, rather than trying to solve it altogether. As such, in the second part of the book, Alpher describes some ideas to muddle through, among which include the international community taking charge, the Arab Peace Initiative, and a stable, long-term ceasefire with Hamas in Gaza.

The final part of the book deals with the ramifications of Israel’s current course and the consequences if it remains unchanged from moving toward a single, openly apartheid or a binational Arab-Jewish state, or some blurry area in between. Some proponents of West Bank annexation and apartheid-like policies are confident that it will not be sustainable and that the world will cope with that reality as long as Israelis stay “united and confident”. There is also a sense that as relations with the West worsen, new economic and security relations can be found with the East – including through the idiotic “Sunni alliance,” surely a peak in the political foolishness of some Israelis. Yet on the other hand, many wiser Israelis – including the author himself – believe that some progress toward a peace agreement with the Palestinians must be made to save Israel and preserve its standing in the world. Alpher, for his part, sets out all these arguments and points of view fairly and succinctly in a book that is well worth reading.