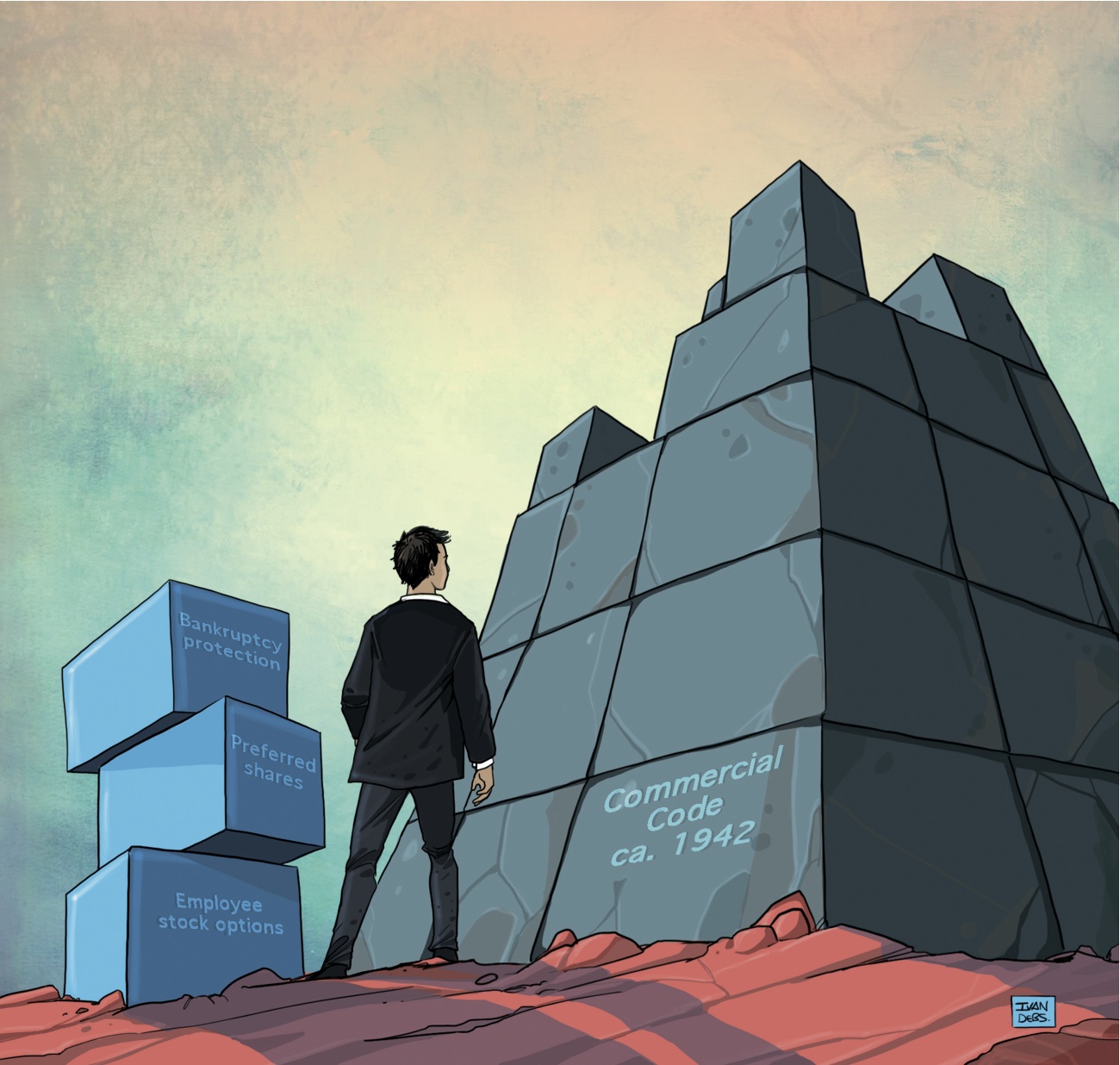 Lebanon is an awful place to start an innovative, new business venture – from a legal perspective, at least. There are a few general rules that apply to startup companies: 1) Around 90 percent are expected to fail; 2) Founders typically have no cash, investing all they have (and all they can raise) into the business; and 3) Founders typically have no assets (especially in the earliest days of the business), making traditional bank loans all but impossible as a fundraising option. While Lebanon’s startup ecosystem is growing by leaps and bounds compared to 10 years ago, the country’s commercial code – established in 1942 – is in need of updating, ecosystem stakeholders report. Archaic regulations make starting up costly, and a labyrinth of administrative procedures mean closing a failed business can take years. Young companies hoping to attract investors by offering preferred shares or trying to lure top talent with employee stock option plans jump through hoops like a lion in a three-ring circus. Given that Lebanon is trying to position itself as an incorporation destination for startups from around the world, legal complexities certainly make it less attractive (in the US, for example, one can incorporate online in the state of Delaware for $500, everyone interviewed for this piece noted). Aside from this, the overall impact of outdated laws on Lebanon’s entrepreneurship ecosystem, however, is difficult to quantify.

“There are always workarounds,” explains Abdallah Jabbour, head of Lebanon for Entrepreneurs. “They might be ugly, but things are possible.” Jabbour likens Lebanon’s legal infrastructure for startups to the country’s internet infrastructure – woefully inadequate. “Broadband and legal are the most important long-term investments [the government could make in this sector]. They’re the real enablers.” While Jabbour describes the workarounds as “not optimal,” he says Lebanon’s legal ecosystem “is not killing ventures before they start.”

One potentially costly mistake startup founders in Lebanon make is launching business activities before incorporating a company, explains Alain Noujaim, a partner with Noujaim Law Office which works with young businesses. Without a corporate structure for their enterprise, startup founders have nothing to limit their liability should a contract dispute arise. Noujaim’s advice? “As soon as you need to deal with third parties and contracts, incorporate,” he says.

Central bank circular 331 – which made around $600 million available to Lebanese startups that are part of the “knowledge economy” – specifies that investments can only go to joint stock companies incorporated locally (article 1). Noujaim reasons that, while this is an expensive option, it is the best corporate identity for a startup in Lebanon. By law, a local joint stock company, known as a Société Anonyme Libanaise, or SAL, must have a paid-up capital of $20,000, a lawyer on retainer and an auditor as well as an independent auditor appointed by a court. Incorporation and associated fees for forming a joint stock company add another $3,600 or so to the total cost of starting up, Noujaim notes. As a comparison, a limited liability company must have a paid-up capital of $3,333, a lawyer on retainer and only one auditor in certain circumstances (meaning some are not required to have full-time auditors). However, limited liability companies in Lebanon have complicated shareholding rules (shares are known as units, not shares, and are difficult to transfer) and cannot issue bonds or convertibles, which startups frequently rely on when raising capital. The consequence of this, at least in the pre-331 days, Noujaim says, is that several of the startups he worked with incorporated outside of Lebanon to reduce costs and red tape. Companies receiving investments through circular 331, however, must incorporate in Lebanon.

In the venture capital world, preferred shares are important. Those investing in a startup – whether a venture capital fund or a private/angel investor – typically receive preferred shares in the company in exchange for the cash infusion. This type of share class comes with more privileges than common stock, (perks vary, depending on the agreements between investor and startup), but typically without voting rights, which is not legally possible in a Lebanese joint stock company. There are workarounds for issuing preferred shares without voting rights, Noujaim explains, (such as creating an offshore company to own the startup), but the extra legal maneuvering drives up the cost of the transaction.

The same is true for employee stock options. Given that startups are usually cash poor, they rely on offering employees stock in the company to attract a high-quality workforce. As these shares also do not have voting rights, Noujaim explains issuing them faces the same challenges as issuing preferred shares to investors. On top of that, founders need to protect themselves from anyone seeking to take the equity and run, so employee shares are usually “vested” over a period of time, (five years for example), instead of given all at once, and tend to be based on an employee’s performance. Again, Noujaim says, such options are not possible under Lebanon’s commercial code, so lawyers tend to write several deferred share transfer agreements between startup and employee, driving up the cost of the transaction further.

[pullquote]To date, none of the amendments have been passed by parliament and only a few are ready in a final draft form for the legislature’s consideration[/pullquote]

If a startup fails – as is very common – closing up shop can take years says Rami Alame, head of financial services and ventures at Ororus Advisors, a law firm which works with startups. This problem, unlike the others, cannot be easily fixed. Where some of the other issues startups face from a legal perspective can be mended by updating laws, the process of filing for bankruptcy drags on because of the administrative procedures involved, Alame explains. The complexity and time involved in a bankruptcy is bad for startup founders keen to quickly move on to a new venture. Alame notes that Lebanon also lacks bankruptcy protection, particularly a business judgement rule. While Alame admits it is rare, under the law an investor in a startup that fails can take the startup to court by arguing that the founders made bad management decisions, which led to the company’s demise. A business judgement rule allows founders and management some leeway to make decisions, Alame explains, whereas without it, founders and management can have their every decision picked apart in court. A guilty verdict could even land a startup founder in jail, although Alame stresses this is a rare outcome. He advises startups to include arbitration clauses for potential bankruptcies in term sheets when negotiating investments to avoid the courts, which are overburdened, slow-moving beasts in Lebanon.

Startups are not the only entities that would benefit from updates to the commercial code. Jabbour, of Lebanon for Entrepreneurs, has been helping draft a new law related to private equity and venture capital companies (which Executive covered extensively in June). He says the PE/VC law is part of a basket of 13 updates to the commercial code that the Office of the Prime Minister has been working on since 2010. To date, none of the amendments have been passed by parliament and only a few are ready in a final draft form for the legislature’s consideration, Jabbour says. Executive was unable to reach the Office of the Prime Minister for comment, but with parliament convening very rarely in the past few years – resulting in an ever growing agenda – passing these draft laws is unlikely to happen soon.