When venture capitalist Aileen Lee first employed the term “unicorn” to refer to startups valued at or above $1 billion, she intended to stress just how uncommon a creature she was describing. In a November 2013 post that spawned a Forbes list, Lee identified and analyzed 39 “US-based tech companies started since January 2003 and most recently valued at $1 billion by private or public markets.” While her lens was US-focused, that was fewer than four unicorns born per year, on average, during the 10 years under study. Even if she missed some in the wider world, the beasts have undeniably been breeding like rabbits since she named them. The tech and entrepreneurship news website CrunchBase’s unicorn roll included 229 of the horned wonders as of May 23 (more than five times the number Lee found when she went hunting less than four years ago).

At the moment, taxi-hailing app Careem is the only Arab company on the CrunchBase list, having earned the title in December 2016 after a $350 million funding round. At ArabNet in March, Christian Eid, Careem’s head of marketing, joked that the company was a “unicamel,” later explaining to Executive that growth and keeping customers and drivers happy were more important than milestones and mythical monikers.

Gone from the list as of mid-March, however, is the MENA-founded Souq.com. The site began as part of a larger web portal (Maktoob) and followed an e-Bay auction model. In 2009, proof of concept for this type of MENA entrepreneurship came when Yahoo! bought Maktoob (but not its sister sites, including Souq). At the time, the deal had a rumored value near $100 million, although in a disclosure to the US Securities and Exchange Commission (SEC), Yahoo! later revealed that it spent $168 million on Maktoob. The acquisition was a confidence booster for the ecosystems around the region, and after switching to an Amazon-style business model, Souq.com kept growing. In fact, on the heels of a $275 million funding round in February 2016 (eight months before Careem), Souq became the first Arab unicorn, at a time when it was being courted for purchase by Amazon. In March, the global e-commerce platform announced it had acquired Souq, without disclosing a price. Amazon refused to comment on press reports that the deal is far below $1 billion. (The magic number will eventually be revealed, as Amazon cannot decline comment to the SEC.) Like the Maktoob deal, however, a significant added value of this transaction is the confidence boost it brings.

While Arabian Business might have gone too far with the May 26 headline “Gulf e-commerce market seen exploding after Amazon entry” (and inadvertently frightened readers), venture capitalists in Beirut tell Executive that, regardless of size, the psychological impact of the purchase makes it a big deal at a time when ecosystems around the region are teeming with growth.

No shortage of money

Detailed data is hard to come by, but Magnitt, a Dubai-based regional platform for startups and investors, offers something by way of numbers, which are looking better and better in terms of the maturity of ecosystems. Unfortunately, the company follows the modern trend of publishing “reports” as flashy infographics as opposed to text-heavy tomes with annexed raw data. For example, Magnitt’s 2016 State of MENA Funding reports that both the total value of investments and average ticket sizes have shown strong growth between 2014 and 2016, but fails to define clearly in the report (or anywhere Executive could find on their website) what countries are included in MENA. That said, there is plenty more money on the way, although not specifically earmarked for MENA spending.

In October last year, Saudi Arabia announced a partnership with Japan’s SoftBank aimed at creating a $100 billion (yes, that is billion with a b) VC fund, with the Kingdom’s coffers contributing the first $45 billion. On May 21, the SoftBank Vision Fund announced commitments of $93 billion and plans to hit its target within six months. Five days later, Saudi Telecom Company announced it would soon launch a self-funded $500 million VC fund.

One critique still raised about MENA entrepreneurship, at least by those in the Lebanese ecosystem, is the tendency to clone. Yahoo! wanted Maktoob because of its Arabic-language email service (translation is arguably not innovation). Souq.com and Careem are similarly tailoring winning ideas to local markets. This is not to say there is no innovation in MENA, or that ecosystems are not adding value to their home countries even if they are not pumping out unicorns. What is undeniable is the increase in activity, in terms of new startups forming (even if exact numbers are elusive), new VC funds operating, and new support infrastructure (by Magnitt’s count, in the undefined MENA there are today 31 accelerators and 27 incubators).

For Fadi Bizri, an active member of Lebanon’s entrepreneurship ecosystem for nearly a decade and today working with the local VC B&Y Venture Partners, recent good news in the regional startup space — from unicorns to a high-profile acquisition and a Gulf billionaire’s foray into ecommerce (see box above) — is creating a buzz that’s drawing welcome attention, both from international investors and local high-net-worth individuals and governments. If success breeds success, this is arguably an exciting time for MENA entrepreneurs. 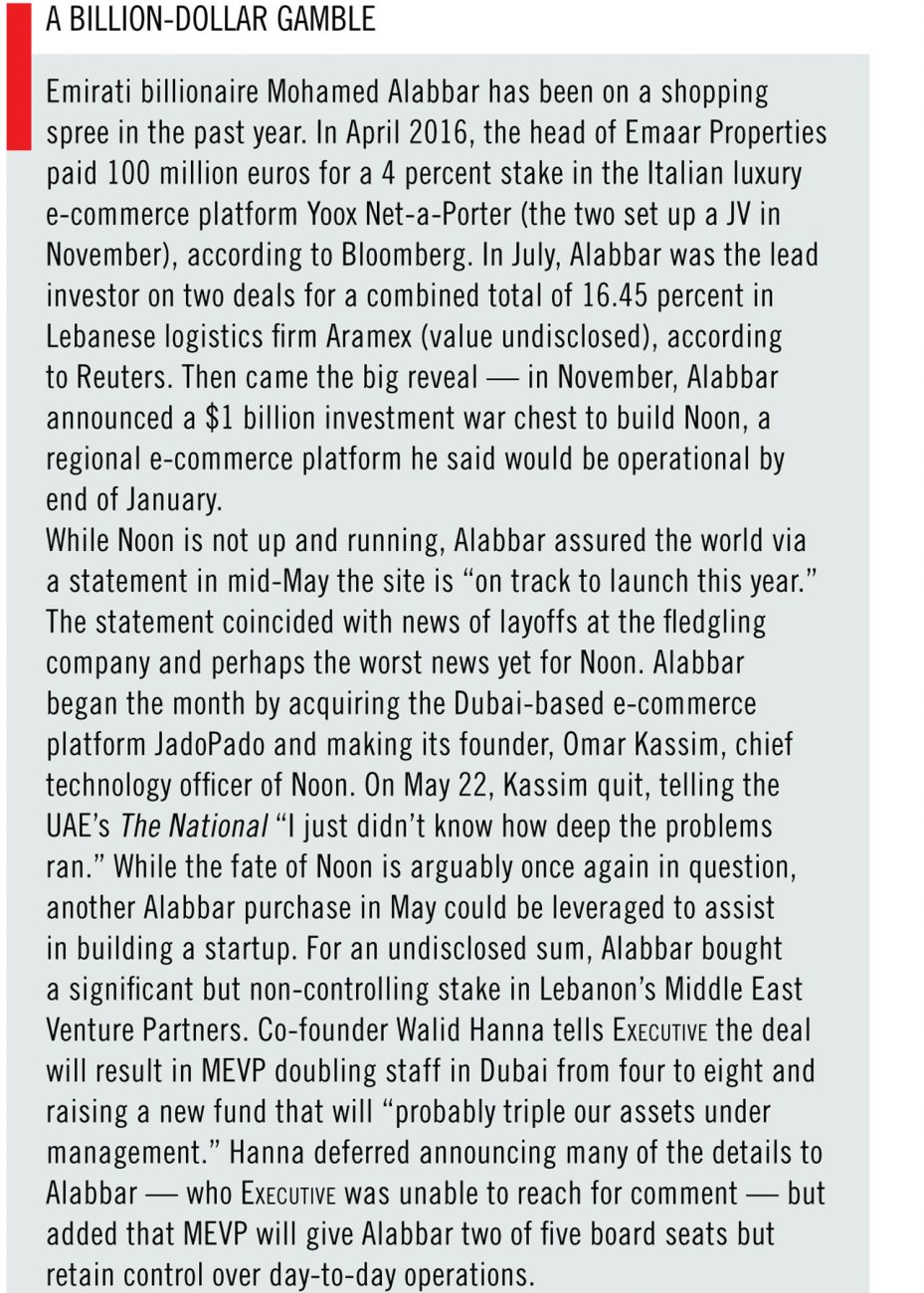 When restaurants and tech meet

Thank you for this insightful analysis Matt!

This has its benefits and disadvantages, e.g. this style is becoming popular (as rightly pointed out) and considers the short attention span in times of information overflow. One disadvantage is the fact that their data is flawed, because it relies on their own database which is strong on early stage and Dubai-based companies.

Kindly note there are reports by both ArabNet (http://intelligence.arabnet.me ) & Wamda (https://www.wamda.com/research ) that strike a fair balance between graphs and text. They also come with a proper Methodology section and Executive Summary. They include reports on investment and ecosystem growth, but lack global benchmarks and a more critical / realistic assessment of societal and political factors that keep the ecosystem behind its peers in Southeast Asia and India. Still, aside from the fact that ArabNet & Wamda have a poor media/ PR strategy, to my knowledge their reports are the best available to date.