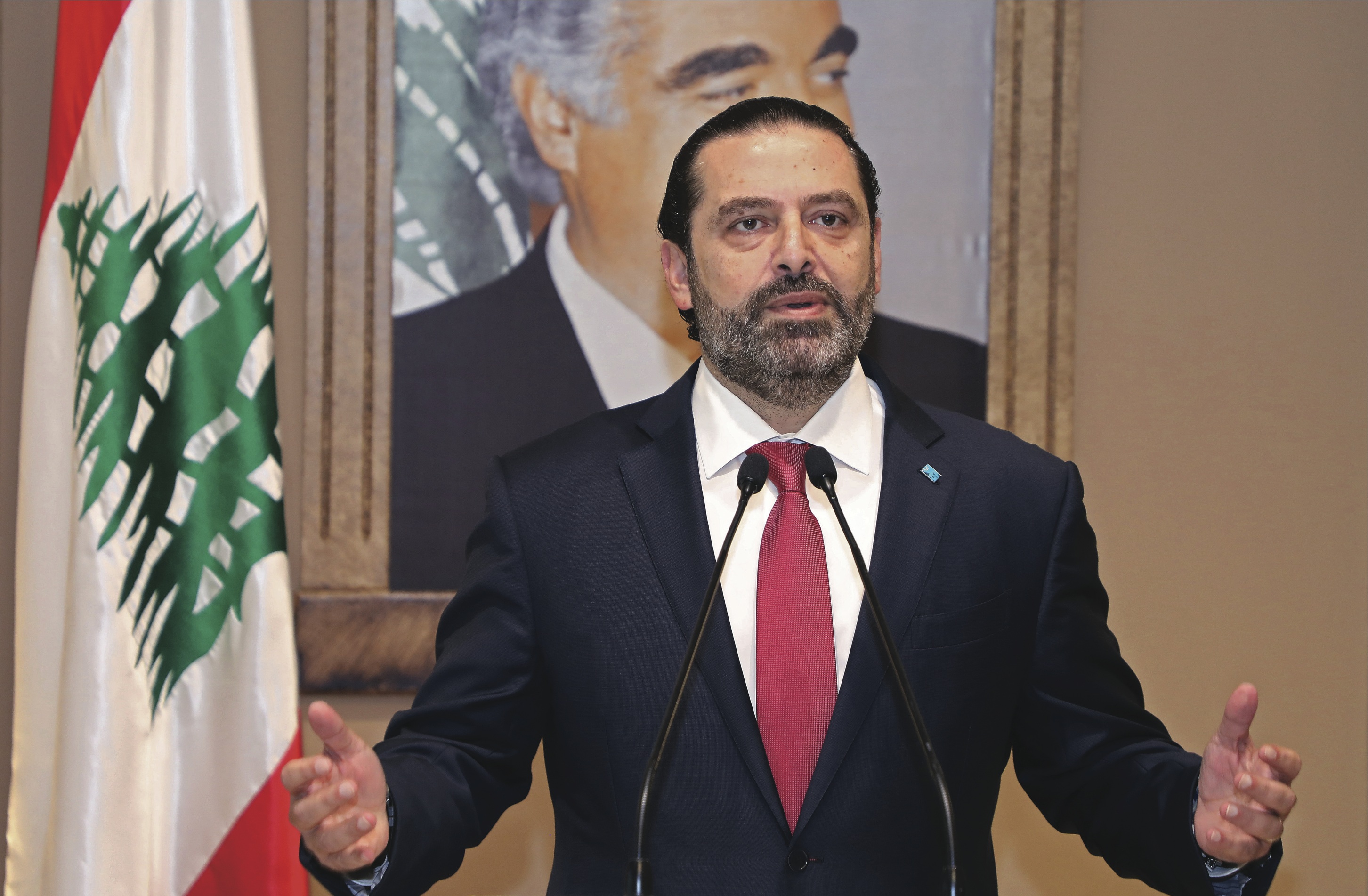 Aoun, backed by Hezbollah, is elected president of Lebanon, ending a two-year stalemate.

Hariri begins his second tenure as PM, forming a 30 minister cabinet that includes all political parties with the exception of the Kataeb party.

PM Hariri attends Brussels Conference I  on Supporting the Future of Syria and the Region to receive international aid for refugees in Lebanon.

Cabinet commissions McKinsey & Co. to develop the Lebanese Economic Vision for the value of $1.3 million in time for the Paris donor conference (later named CEDRE) in April.

Reading a televised statement, Hariri resigns as PM of Lebanon from Riyadh citing the overextension of Iran in the region and fears of assassination.

PM Hariri is interviewed by Future TV on the reasons behind his questionable resignation adding he will be returning to Lebanon shortly.

After spending a fortnight in Saudi Arabia allegedly discussing Iran’s policies in Lebanon and the region, President Emmanuel Macron invites PM Hariri and his family to France to discuss the region’s political climate.

After meeting with President Aoun, PM Hariri postpones his resignation.

PM Hariri withdraws his resignation stating that this decision is based on the agreement that all members of the government stay out of the affairs of other Arab countries.

PM Hariri attends a meeting with the International Support Group for Lebanon (ISG), chaired by the United Nations and France.

PM Hariri states that the 2018 budget will not include new taxes.

Rome II donor conference is held to secure funding from France aimed at empowering the Lebanese Army and other national security institutes.

Cabinet approves plan to save electricity sector in accordance with Energy Minister’s proposals.

Nabih Berri is reelected as Speaker of Parliament, Elie Ferzli as his deputy.

PM-designate Hariri and Parliament Speaker Berri meet to discuss cabinet formation. Hariri states after the meeting that delays in government formation have been the result of a competition for shares in the coming cabinet.

PM-designate Hariri announces that a national unity government lineup has been handed to President Aoun.

President Aoun from Strasbourg: Government will be formed soon as a balanced formula is reached. No sect should monopolize representation or marginalize any side.

PM-designate Hariri says that Lebanon’s economic situation calls for the immediate formation of the government within the next 10 days. The FPM and Lebanese Forces continue to argue over their shares.

After seven months of political deadlock, members of the Sabaa Party block the entrances of the ministries of labor, social affairs, and industry to protest the delay in government formation.

Around a thousand people march from Hamra to Riad el-Solh protesting against government policies and the economic situation in a demonstration organized by the Lebanese Communist Party and the Popular Nasserite Organization.

The Arab League Economic and Social Development summit takes place in Beirut despite rumors of postponing due to disputes between Lebanese parties over the normalization of relations with the Syrian government.

First meeting after government formation is held with the Economic and Social Council to tackle the next steps into implementing CEDRE which included discussions of a 22-point economic plan needed to unlock funds.

First ever EU and Arab League Summit in Egypt kicks off with PM Hariri heading the Lebanese delegation in Sharm el-Sheikh.

Ministry of Finance hands over all the statements and documents necessary for the Court of Audit to audit the public accounts starting from 1993 until 2017.

PM-Hariri calls for the implementation of a harsh austerity budget for 2019.

The US sanctions Hezbollah lawmakers.

State budget with austerity measures is passed, four months past its deadline.

PM Hariri suspends Future TV due to financial troubles. Over 350 workers lose their jobs after being on strike since July 30 for not receiving their salaries for 24 months.

Interchangeable currency transactions on ATMs are stopped with no official statement from the Association of Banks.

125 wild fires break out across Mount Lebanon over two days with around 1300 acres burned. Three Sikorsky firefighting helicopters donated to the government in 2009 could not be used as they were not maintained.

> Protests continue nationwide with schools and banks ordered to close until the early hours of the next morning, when security forces start firing tear gas and protesters move out of Downtown.
> PM Hariri holds a press conference announcing a 72-hour deadline for the passing of the long overdue economic
reform plan.
> Protests continue nationwide calling for the fall of the regime.

PM Hariri announces a list of 17 reforms approved by cabinet that propose to cut the deficit and expedite administrative reforms without increasing taxes on the people.

President Aoun addresses the public for the first time since the beginning of the protests pushing the idea that PM Hariri’s economic reform plan will save Lebanon.

President Aoun addresses the nation with a televised speech vowing to work toward a civil state and promising to implement a unified Personal Status law.

> President Aoun and son-in-law Minister of Foreign Affairs Gebran Bassil address Pro-FPM demonstrators gathered in front of Baabda palace in large numbers.
> Tens of thousands of anti-establishment protesters gather in Downtown Beirut and all around the country.

> Moody’s Investors Service downgrades Lebanon’s credit rating from Caa1 to Caa2.
> Road closures were forced open by the Lebanese Army on the 20th day of protesting.

> US Secretary of State Mike Pompeo: Iraq and Lebanon deserve to set their own courses free from Iranian Supreme Leader Khamenei.
> School and university students embark on nationwide protests after a threat that came from the headmaster of a school in Saida against student participation, citing repercussions would be expulsion and the inability to sit for their official exams.

President Aoun: “If they [protesters] do not like it and there is not a single decent person in power, then they should go and emigrate.” Thousands take to the streets in anger after Aoun’s televised interview to denounce the emigration statement made, with one protester, Alaa Abou Fakhr shot dead during an altercation with an army colonel and the driver of the colonel’s car.

Ex-Minister MohammadSafadi is touted as a candidate for PM, he is rejected by anti-establishment protesters.

Protesters block all entrances to Parliament and prevent a legislative session they deem unconstitutional. The session was to include passing of a controversial general amnesty law.

> In celebration of National Independence Day, protesters organize a civil independence parade, marching from several meeting points in Beirut toward Martyr’s Square.
> In the official celebration, a military parade is held on Ministry of Defense grounds in the Beirut suburb of Yarze in presence of President Aoun, House Speaker Berri, caretaker-PM Hariri, and General Joseph  Aoun, commanding officer of the Lebanese Armed Forces.

Pro-Hezbollah and Amal protesters violently clash with anti-establishment protesters on the Fouad Chehab bridge, known as “the ring” and burn down their tents in Martyr’s Square.

Businessman Samir Khatib withdraws his candidacy for PM just three days after he received public support from Caretaker PM Hariri and FM Bassil and one day prior to a consulations to select a new PM.

Former education minister Hassan Diab is named PM after securing 69 MP votes in the Parliamentary consultations. Diab is supported by Hezbollah, FPM, and the Amal Movement.