A selection by Executive 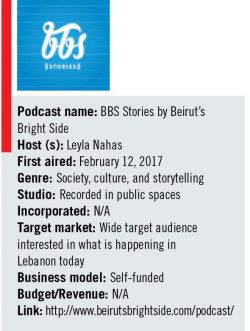 How it started: Host Leyla Nahas and partner Rami Obeid were inspired by music mixtapes distributed online by Beirut in the Mix and Ziad Naufal, as well as the work of Radio Beirut, to start sharing positive stories about the city. This formed the blog, Beirut Bright Side, which they launched three years ago. “What started as a blog quickly evolved to become a podcasting platform since music is what we know and has always been our bread and butter and it made sense to create auditory documentaries,” she says. They have released six episodes so far, featuring interviews with the likes of Peter Mouracade, CEO of the Beirut Marathon Association and Bahi Ghubril, the man behind Zawarib. 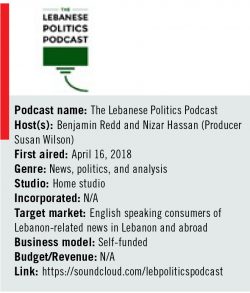 How it started: Noticing a need for more critical and in-depth analysis, Benjamin Redd had the idea to produce a weekly podcast on the main issues in the run-up to the May parliamentary elections. The success of the elections podcast and a growing audience encouraged the team to continue producing an episode each week that provides a critical perspective on Lebanese politics and current affairs. As of writing they had produced 26 episodes, and have recently begun inviting guests on the show to provide further analysis and commentary on major topics. 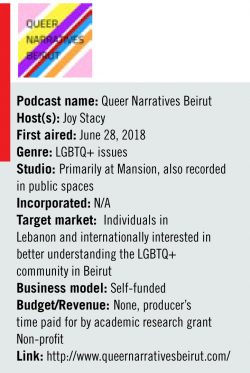 How it started: Queer Narratives was produced by UK PhD researcher Joy Stacy, and sought over its 16 episode run to explore gender and sexual diversity, including transgender identities and the social and legal limitations on gender and sexuality in Lebanon.  Stacy felt podcasting was the best medium as it created an intimacy that was vital when discussing taboo topics, and gave the interviewees a level of anonymity that would allow them to feel safe sharing their stories. She hopes to find funding for a further series in the future. 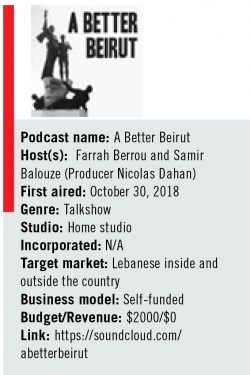 How it started: As the general manager of Aleph printing house, Nicolas Dahan met many people working on positive initiatives to promote Lebanon. It bothered him that no one was taking notice of these initiatives and that news about Lebanon tended to be negative. This inspired him and two collaborators, Farrah Berrou and Samir Balouze, to create a podcast on positive stories. Prior to their launch, they interviewed several stakeholders involved in these initiatives including, Ziad Abi Chaker, Bethany Kehdy, and Habib Battah. Episodes one and two dropped on October 30 and they hope to capitalize on a large number of expats in Lebanon during the holiday season to grow their audience.

Who Run the World 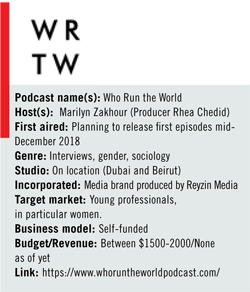 How it started: Marilyn Zakhour and Rhea Chedid, both Keeward alumni, are in the process of launching a new podcast that strives to better understand female leadership through compelling stories from women across industries. The first season will focus on women in the Middle East who either own their own business or are in the top ranks of their corporation. The pair hopes to shed light on what it is like to be a woman working in the Middle East today, and what it takes to succeed. In upcoming seasons, they will focus on women in leadership roles in different fields such as the non-profit sector and politics, among others. 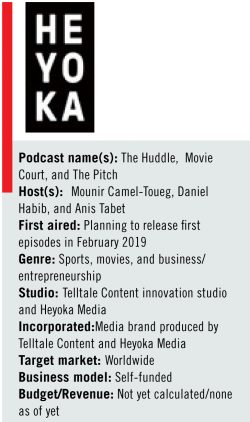 How it started: Tell(tale) and Heyoka are planning to launch three podcasts at the start of 2019, according to Camel-Toueg. They plan to release exclusive and lengthy podcast content alongside shorter 10-12 minute YouTube videos that will summarize the interviews and draw in listeners. They plan to create podcasts about Lebanon with discussions and interviews that will primarily target the diaspora, with the belief that these will trickle down into a local interest. Camel-Toueg believes that Tell(tale) and Heyoka can play a leadership role due to their talented team with a variety of radio, music, and film experience.

Targeting the right people for our advocacy

Farming for the future