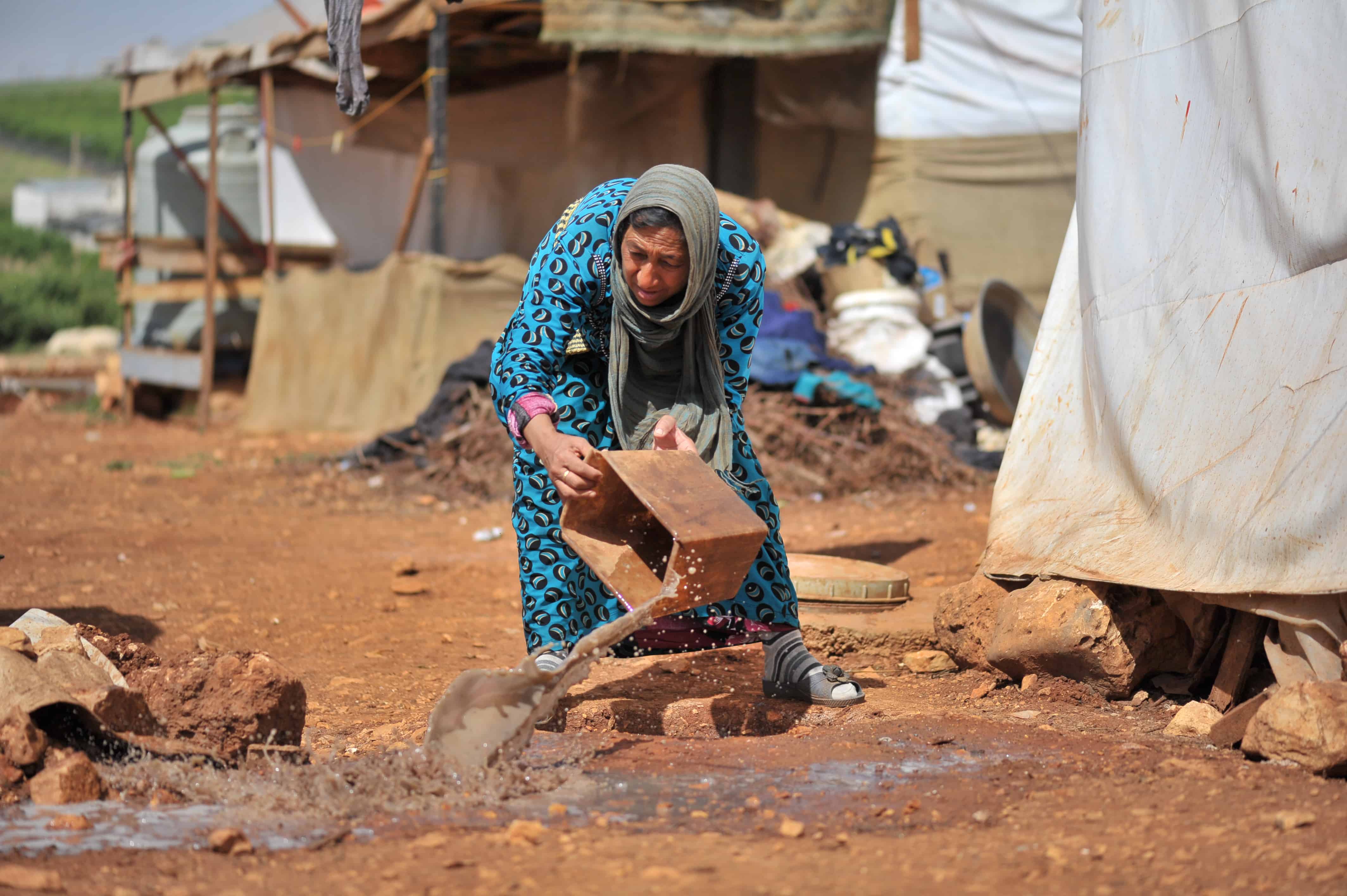 For Neji*, the two-room apartment he shares with seven other men was supposed to be a refuge. Six years ago, he fled his home in Syria to escape the bombings that haunted ordinary life there. Last month, he narrowly survived the shockwave from Lebanon’s largest explosion as it tore through his neighborhood a mere kilometer away from the port, smashing windows and causing buildings around him to crumble.

“All of our windows are destroyed, door locks broken, the walls have cracked, and parts of the roof in the kitchen have collapsed,” Neji says. “We need urgent repairs ahead of the winter but with no jobs and income we can’t afford to repair all the damage. Water is leaking from both the ceiling and the walls. We don’t live in dignified conditions, but we can’t afford to move either.”

Neji was subsisting on informal work at the port. Work had already started to dry-up as the COVID-19 pandemic began to spread through Lebanon earlier in the year. The explosion has now caused a total loss of income. He does not know if he will be able to pay his rent anytime soon and wonders how long his landlord’s patience will last. It’s the story of thousands of people, and refugees in particular, in Lebanon, who, for several months, have struggled as three different crises have conspired to leave the country on edge: an unprecedented economic crisis, a pandemic, and the world’s third largest explosion.

50 percent of Lebanon in poverty

Since the August 4 explosion, it is estimated that more than 70,000 people have lost their jobs. The devastation wrought by the shock waves has put thousands of businesses at risk. Many now fear they will not have enough to eat, with the price of common goods rising as the Lebanese lira languishes at a fifth of what its value was a few months ago. Those with savings in their bank accounts cannot access them due to the banks’ restrictions.

Even before the blast, Lebanon was on its knees. A prolonged economic crisis worsened by the corona virus pandemic has resulted in a rise in poverty rates across the country. Already in April 2020, in a survey conducted by CAMEALEON, a Norwegian Refugee Council (NRC)-led research network, 96 percent of Syrian respondents from the Bekaa and North of Lebanon, reported that the COVID-19 pandemic had negatively affected their ability to find work.

Recent surveys put more than 50 percent of the population below the poverty line, with 23 percent of Lebanese facing extreme poverty. For Syrian refugees, the figure is even higher, with 83 percent living below the extreme poverty line. Poverty amongst Palestinian refugees is also expected to increase. And the sharp rise in corona virus cases across the country will only add more misery to an over stretched health system while measures to curb the spread of the virus will further negatively impact businesses and livelihoods. During NRC’s recent assessment of families’ needs in Karantina, an area near the port where NRC is responding to the aftermath of the explosion, 95 percent of responders with chronic medical conditions said they cannot continue their treatment because they can no longer afford it.

The immediate effect of the explosion has been a shocking rise in homelessness, affecting up to 300,000 people. Thousands of homes were badly damaged, but the economic reality means that many will not be able to repair or even return to their homes. The funding for the shelter response has also not hit the ground fast enough, with only 7.5 percent of the UN flash appeal disbursed at the time of writing. As we warn, this may mean tens of thousands of people made homeless by the explosion in Beirut risk being left out in the rain and cold unless aid funding is stepped up immediately.

And to add further stress to families affected, the NRC has already documented a sharp increase in threats of evictions and actual evictions by property owners before the blast. With the economic disaster affecting everyone, both parties are facing grim prospects: tenants cannot afford the rent, and their landlords need the income.

This is not a crisis from which Lebanon will emerge anytime soon. The full consequences of the economic, health and physical devastation are yet
to become fully apparent. It is tragic that it took an explosion of such magnitude to call the world’s attention to what Lebanon has been enduring for several months now. The outpouring of sympathy has been encouraging, but it threatens to fade away before the necessary political reforms are implemented and the country begins to get a fraction of the assistance that it so desperately needs.

While welcome, the pledges of emergency assistance from the international community have scarcely even addressed the immediate needs of people in Lebanon, including its refugees and migrant worker communities. The devastation wrought by the explosion alone is estimated to reach into the billions of dollars. Beyond the repair and reconstruction that needs to take place, there are deeper crises that demand more sustained, longer-term international attention: shortages of food, electricity, jobs and homes. The country needs long-term aid that supports rebuilding livelihoods and kick-starting early recovery.

Structural changes must also not be neglected, and the people’s voices and demands for accountability need to be heard. No country has been more generous in opening its door to refugees than Lebanon. It is crucial that Syrian refugees, who have befallen yet another tragedy, continue to receive the assistance that they need, but also that vulnerable Lebanese communities and migrant workers, who share many of the same tribulations, are also supported. Without long term international assistance and much needed reforms, Lebanon may see further entrenched poverty and prolonged suffering across the country.