The profitability of alpha banks – those with deposits above $2 billion – has grown in the third quarter of 2016 when measured by the improved return on average equity (ROAE). The ROAE ratio at end of September was almost two percentage points higher than a year earlier.

This insight from quarterly figures released after the end of the third quarter (for details see the table below) is a hopeful sign for the Lebanese economy which, after a challenging year in 2015, showed signs of an even drearier year in 2016. In the midst of a troubled socio-political context, Lebanese banks stood their ground throughout the first three quarters.

In fact, while activity registered modest growth in the first six months, mostly generated in the second quarter, the third quarter witnessed acceleration in domestic activity. The financial engineering operations initiated by Banque du Liban, Lebanon’s central bank, generated significant growth in financial inflows to Lebanon – estimated at 36 percent year-on-year over the first nine months of 2016 – triggering a higher increase in domestic customer deposits. In addition, Lebanese banks maintained their high financial standing and managed to sustain profitability throughout the first nine months of the year.

The analysis below lays out the half-year performance of the 22 banks that constitute the alpha and beta groups, as well as the third quarter performance of the alpha group. The two groups above include 14 and eight banks, respectively, and represent around 95 percent of the Lebanese banking sector. In 2016, there were 48 banks operating in Lebanon, excluding subsidiaries.

At the consolidated level, total assets of alpha and beta banks equaled $219 billion, growing by a mere 1.5 percent, or $3.3 billion, by the end of June 2016. In parallel, customer deposits registered slow growth of 1.1 percent to reach $181 billion, while loans to customers showed more stamina with 3.1 percent growth to $71 billion for the first half of the year.

When looking at domestic activity, the overall trend observed in the past two years remains unchanged; customer deposits represented 84 percent of total deposits, while domestic loans represented 71 percent of total loans. It is worth mentioning that while the activity of foreign entities might be satisfactory, the depreciation of the Egyptian Pound and Turkish Lira have impacted consolidated balance sheet aggregates since Egypt and Turkey remain important foreign markets for some large Lebanese banks in terms of assets.

Domestic deposits stood at $151 billion at the end of June, up by around $3.2 billion since December 2015, compared to an increase of $7.3 billion over the full year 2015. Domestic loans, on the other hand, passed the $50 billion threshold at mid-year, registering an increase of $1.4 billion since December 2015, bearing witness to the sluggish domestic environment. Overall, foreign activity represented 18 percent of assets, 16 percent of deposits, 29 percent of loans and 20 percent of net profits at the end of June.

At the currency level, dollarization of deposits was stable at 63 percent, while dollarization of loans went down to 73 percent at the end of June 2016. In terms of growth, there was a notable 6.2 percent increase in loans denominated in Lebanese Pounds (LBP), reaching around $13.7 billion at mid-year.

The financial performance of alpha and beta banks has maintained its good standards. Compared to an estimated MENA benchmark of 22 percent, overall liquidity remains high at 30 percent, broken down into 20 percent in LBP and 35 percent in foreign currencies at the end of June. The corollary loans to deposits ratio, which stands at 39 percent overall –  25 percent in LBP and 46 percent in foreign currencies – remains lower than regional and world benchmarks (respectively 77 and 87 percent in 2015), indicating more lending flexibility for Lebanese banks once the economic environment improves.

Despite persistent challenges in Lebanon and main regional markets, asset quality reported a slight improvement over the past year. Doubtful loans to gross loans dropped from 5.9 percent to 5.7 percent year-on-year in June 2016, a ratio lower than emerging markets and global benchmarks of 6.8 and 7.1 percent, respectively, in 2015. The prudent provisioning policies of Lebanese banks prompted them to take all needed measures to maintain their good asset quality, which translated into an adequate coverage of doubtful loans of 73.7 percent, compared to a world average of 68 percent in 2015. In addition, alpha and beta banks increased their collective provisions to 1.18 percent of net loans by the end of June 2016.

Last but not least, the first half of 2016 reported a growth in net profits of 8.2 percent to reach $1.1 billion, outperforming the growth in other aggregates such as assets, deposits and loans. Return ratios remained modest as both return on average assets (ROAA) and ROAE edged up slightly compared to June 2015, registering 1.03 and 11.63 percent, respectively. In comparison, the MENA average ratios stood at 1.6 and 12.1 percent, respectively, in 2015.

The major developments of the alpha group of 14 banks as of the end of September 2016 are as follows:

Growth of major aggregates was reinvigorated as assets, deposits and loans witnessed respective increases of 5.1 percent, 3.2 percent and 4.7 percent. The most notable growth was registered in loans in LBP, which reached 9.4 percent, further contracting the loan dollarization ratio and foretelling a gradual restoration of the role of the Lebanese Pound as a borrowing currency. In parallel, loans of foreign entities increased by 6.5 percent.

Alpha banks remain highly liquid at 33.58 percent and continue to foster economic growth by increasing their loans to deposits ratio to 38.48 percent, broken down into 24.14 percent in LBP and 44.66 percent in foreign currencies. In parallel, banks undertook significant efforts in the summer to sell Lebanese Eurobonds out of their portfolio holdings to foreign institutional investors. Their foreign currency sovereign exposure fell to 13.24 percent of foreign currency deposits and 83.22 percent of shareholders’ equity. At the profitability level, net profits grew by 9.7 percent, reinforcing return ratios at large. The return on average assets rose from one percent in September 2015 to 1.17% in September 2016, while the return on average equity rose from 11.33 percent to 13.05 percent over the same period. In detail, interest margins and spreads remained stable at 2.01 percent and 1.94 percent, respectively, with a notable impact brought by the increase of non-interest income that rose from 0.88 percent of average assets to 1.32 percent year-on-year, which translated into higher asset utilization of 3.26 percent. Coupled with stabilized net operating margins and leverage, return ratios went back to their 2011 levels. 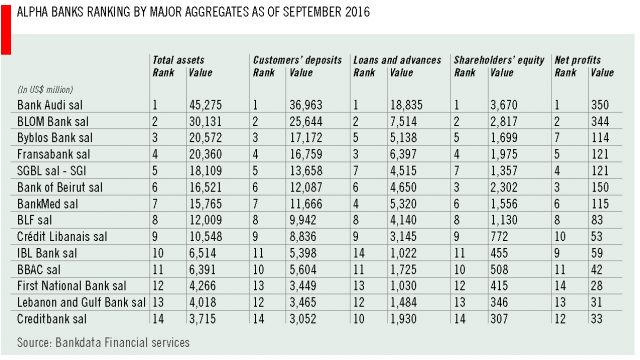 What to expect from Lebanese banks in 2017

How long will the lights stay on?

Vivisection of a trade heart

Retail on the run

Good analysis of results. Lebanese gangs only have to sustain the high financial position.