Despite excitement from Arabtec and Emaar, regional markets continue their lazy bent

The hottest spot in Beirut

The MENA’s benchmark indices kept a steady direction in the 37th week of the year, generally continuing the trend of the previous week. The region’s largest market, Riyadh’s Tadawul, continued to move sideways at an elevated level reached by a six week rally between July 21 and the start of September.

The bourses of Oman, Abu Dhabi, Qatar and Kuwait advanced this week at paces ranging from 0.9 to 0.5 percent. Bahrain Bourse dropped a tad but the shrinkage was less than in the two previous weeks, allowing the arrow to shift from down to flat. 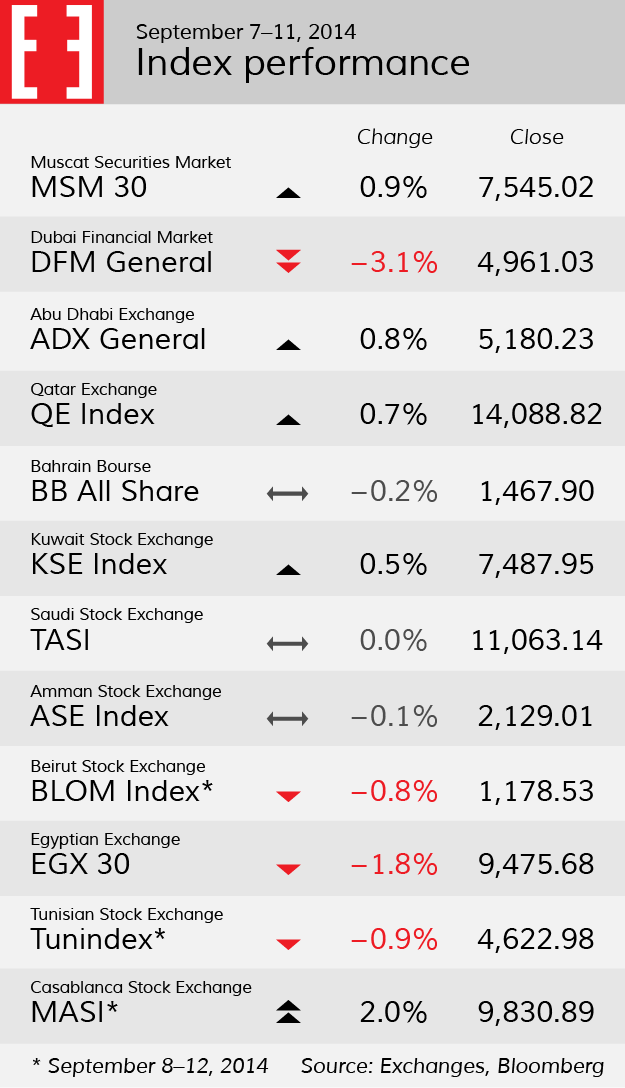 In North Africa, the Tunindex’s slide of three weeks actually accelerated a bit but the MASI rose for the third consecutive week, advancing the Casablanca Exchange to the highest index reading in two years. It is worth recalling, however, that the Moroccan exchange is still over 3,000 index points from peaks reached in early 2011.

In the Lebanese market, Bank Audi stock made another sweep of the action as a total of 19.8 million shares in the bank changed hands on two consecutive trading days, at or near the $6 share price at which the bank had earlier put its share value when announcing a $43 million capital increase. On September 9, when 17 million shares in Audi were traded, the stock closed 2.9 percent lower. The market’s BLOM Index did not benefit from the week’s massively increased turnover, which also included trades in about one million Byblos Bank shares.

The only indices in the MENA to swing from black to red in week 37 were the DFM general index and the EGX 30. As the only directional change in Gulf Cooperation Council securities markets, the weekly drop in the DFM was almost as pronounced as the rise of the previous week had been.

One contributor to the DFM’s volatility of sorts was the primary markets effect, by which an initial public offering draws money and commonly sucks part of it out of the nearest secondary market. Shares in Emaar Properties, whose IPO of subsidiary Emaar Malls Group is progressing with an offering range of DHS 2.5 to DHS 2.9 per share, dropped slightly in the latter part of week 37 as the stock moved beyond the date at which share owners could claim priority allocation of EMG shares in the IPO.

According to the data for the flotation, the addition of EMG to the DFM at the end of September will heighten DFM market cap by somewhere in the neighborhood of 10 percent. A planned cash-out from the IPO is estimated at $1.4 billion that will be handed to shareholders in Emaar Properties, notably including the government of Dubai.

A second stock that was traded with vigor on the DFM in week 37 was the market’s apparently still largest fount of rumors, construction conglomerate Arabtec. Investors sold and bought Arabtec shares in week 37 and on the following Sunday, based on switching tales that negotiations between the two largest shareholders had stalled (selling frenzy) or were near a successful completion (buying sprees).

On September 10, when negotiations were rumored to have collapsed, the stock tanked to its limit down of 10% and closed at 9.1 percent down. It deserves to be noted that Arabtec has added a phone number for its investor relations team at the top of its homepage, with the reassuring message that the company is thus “closer to you than ever.”

The other directional change of a MENA market in week 37, in Egypt, was seen by local analysts as driven by profit taking after the Egyptian market had rallied to six-year highs on September 7–8. Major corporate names, from developer Sodic and Telecom Egypt to manufacturer Ezz Steel and financial group EFG Hermes, came under selling pressure at the end of the week. While analysts said that some investors may have sought liquidity in preparation for an upcoming EGP 1 billion rights issue by SODIC, the weekly drop in the EGX 30 was not likely due to a drainage effect from the cash absorption by the Suez Canal investment certificates. While the bonds continued to sell like hot cakes to the point of achieving $5.5 billion turnover in the six days to September 11, a report in the Al Ahram daily said that 90 percent of buying came from individual savers and people who chose to purchase a certificate out of patriotic sentiment, making it unlikely that liquidity from the Egyptian Exchange was lapping into canal bonds. In the portion of the offering that was slurped up by institutional investors, insurance companies participated with at least $312 million, according to media reports.