Political outrage may be good for news ratings but does not necessarily have much of an effect on stock markets. This was the week’s message if one scours the index movements on important global and Arab markets.

After the world’s leading economic powers announced on March 24 that they had given the boot to Russia over its Crimea policy and thus were the G8 no longer, indices such as Japan’s Nikkei and Germany’s Dax went on to have a jolly performance the rest of the week. This implied, according to analysts, that the cancellation of a G8 Summit in Russia was not a big deal because the G7 stepped back from firmer retaliations. The Moscow Exchange’s MICEX likewise continued its recovery from lows it suffered at the outbreak at the crisis.

It would have been nice to see sensitivity of Arab markets to domestic decisions that caused outrage in the international community but there was no such luck. Egypt’s ongoing crackdown on political opposition had only a muted effect on its markets. In the week that the country announced that 528 Muslim Brotherhood members were to be executed, it was the worst performing market in North Africa – with the Egyptian Exchange 30 (EGX 30) index dropping over 200 points, or 2.5 percent.

Yet that may not be due to the crackdown on civil liberties at all. In fact, as the world on March 25 cried out in protest against the Egyptian mass death sentences, the market actually had its best day of the week and closed the day up. It was when the country’s new strongman Abdel Fattah Sisi on March 26 announced his presidential candidacy that the EGX 30 fell 2.7 percent on the following day. Market analysts in Cairo attributed the drop to a normal correction as Sisi’s announcement confirmed expectations that had been priced into the market’s recent rally. 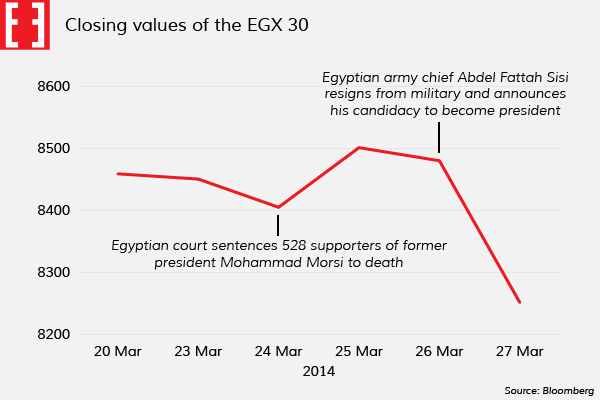 In many ways, this ambivalence towards the dubious state of Egyptian democracy is a continuation of an ongoing trend. Since elected Muslim Brotherhood President Mohammed Morsi was removed from power last summer, the country’s stock exchange has boomed.

There was little movement to report from the other markets in North Africa. On the Casablanca Stock Exchange, the MASI reached its highest reading since December 2012 on March 27 but gave up 60 points the day after and ended the week flat when compared with its opening on March 24. The Tunis Stock Exchange’s Tunindex fell 0.6 percent, and neither of the two markets showed volumes that would hint at great excitement over either political or economic news in the two countries.

One easily surmises that politics is always present in the moods on the Levantine exchanges these days. But that observation goes no farther than saying that the Near East’s entrenched political problems are big contributors to the entrenched illiquidity and weak enthusiasm of the Jordanian and Lebanese securities markets. Jordan’s ASE Index fell 0.5 percent in week 13.

Also in Lebanon, if the Beirut Stock Exchange has any energy left to reflect political moods, the Blom Index’s flat performance between March 24 and 28 signals that the world has to wait a bit longer to see a readable market expectation for the Lebanese presidential elections. According to the Lebanese constitution the elections have to be accomplished in two months’ time.

Riding 1.8 percent higher between March 23 and 27 and again best regional gainer of the week was Dubai’s DFM, the Arab securities market where the state’s ambition and participation is focused most directly on the economy and least on being a player in regional politicking. Not far behind, the Abu Dhabi market’s ADX Index advanced 1.5 percent and the QE index in Doha moved up 1 percent.

Two other markets in the Gulf Cooperation Council showed indices that barely moved: the Kuwait Stock Exchange index added a mere 0.4 percent and the Muscat Securities Market index in Oman gave up less than 0.1 percent. Bahrain was the GCC’s only perceptible loser as the Bourse Bahrain Index fell every day of the week for a total 3.2 percent drop. Profit taking seems a reasonable assumption since the BBI retreated from the bourse’s highest close for the year to date, which it achieved on March 20. For believers in higher justice an unrelated note of caution can be added, however, given that the authorities in Manama earned their own black mark on human rights by leveling 10-year prison sentences against 25 persons arrested over 2012 political protests in the tiny kingdom.

Another Arab market with big political news in week 13 was Saudi Arabia where the TASI ended the week 1.3 percent higher. The kingdom was all steeped in politics, with emphasis on royal issues. The two events of note were the visit by US President Barrack Obama and a new succession announcement by King Abdullah.

The American visitor was paying the king a visit to mend fences, some media said; others speculated about the future divergence of the two powers’ paths. Just prior to Obama’s arrival, the king had announced that his half-brother Moqren bin Abdul Aziz would be crown prince if current heir Prince Salman bin Abdul Aziz ascends to the throne, locking in the succession.

In the ever-popular game of guessing future Saudi directions, the royal succession announcement was a sure and immediate trigger for talks about the health of both Abdullah and Salman. If Salman were to pass on the burden, Moqren could be king sooner rather than later according to watchers of the royals.

The succession announcement was made official on the last day of the trading week but those sorts of decisions throw their shadows ahead. This makes it worth noting that investors in Tadawul, the Saudi Stock Exchange, appeared to bet on continuity. While the political news was brewing, trading volumes in week 13 tended to the lower side when compared with the previous three weeks. The TASI was also very calm just ahead of Obama’s arrival as the index accomplished its weekly net gain of around 119 points basically on the week’s first trading day.

In Yemen, kidnapping is a growing business