Appearances of a lazy summer month with underlying continued positive sentiment played out in the Middle East and North Africa during the 32nd week of the year, the first full week of trading after the end of Ramadan and Eid al-Fitr. The Saudi and the Egyptian bourses each pushed higher quite nicely, based on future-minded political decisions. Both benchmark indices in the United Arab Emirates fell, but did so with moderation when compared with the wilder fluctuations of June and July. 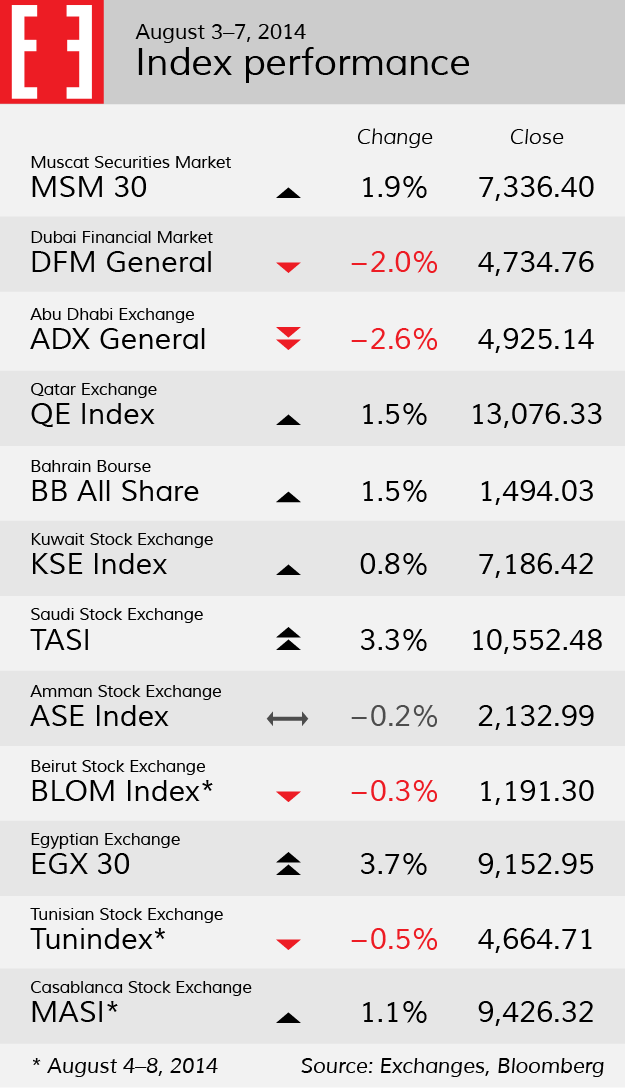 Apart from the UAE, the Gulf Cooperation Council bourses all achieved gains, juxtaposed in a minor way with small drops in the Levant and a mixed picture in the smaller North African markets. On weekly terms, seven benchmark indices moved up and five dropped. Overall, relaxed volumes around the region conveyed the impression that many market participants have opted to take a break from arduous tasks such as poring over second quarter corporate results and the latest regulatory announcements.

In the balance of the two preceding weeks trading had been sparse, as people were preoccupied with the end of the fasting month and with holiday observances of varying length. Under these circumstances, index trajectories in week 32 remained largely consistent with weeks 30 and 31; eight of the twelve MENA markets in Executive’s purview recorded index gains in the period since July 20.

The Egyptian Exchange, whose EGX 30 index was sniffing multi-year record territory right after the holiday, was first buoyed by demand for banking and real estate stocks. From market regulators, trading activity was also emboldened as the bourse reinstituted a discovery, or premarket, session and other daily trading rules which had been under suspension since January 2011.

According to a press statement, EGX Chairman Mohammad Omran “stated that the recent stability helped us to cancel a number of precautionary measures adopted after the revolution of 2011,” and that the situation in Egypt has “returned to normal.”

According to analysts, the week’s main booster of moods was a move by Egyptian President Abdel Fattah al-Sisi who announced that Egypt’s ambitious Suez Canal Corridor Development Project was finally commencing with a $4 billion project expanding transshipment capacity.

The project, which is also supposed to entail the creation of new seaports and a logistics and industrial mega-zone alongside the canal, is a reiteration of a project that was first conceived under former president Hosni Mubarak in the late 1990s and that was tendered amidst controversies by the government of Mohammed Morsi in May 2013.

According to media citing Sisi, the project this time around will be spearheaded by the Egyptian military with a mandate to dig the new waterway within one year, down from three, and will be financed entirely by the Egyptian people via a stock issuance program for a company that has yet to be established.

Shortly after the new president’s new gift was announced, which came just over one year after the military ousted his predecessor Morsi, an Egyptian court ordered the dissolution of Morsi’s Freedom and Justice Party. The political party, an affiliate of the Muslim Brotherhood, had existed for little over three years.

Amid these various news developments, the EGX 30 stayed its course to new peaks and closed week 32 well above 9,000 points — for the first time since the 2008 global crisis. For comparison, the index was moving in the upper tiers of the 6,000 point range at the onset of the 2011 Tahrir Square protests that forced out Mubarak.

Across the Red Sea in Saudi Arabia, the political boost to the stock market was of a more tangible type, in the sense that foreign institutional investors can now look forward to direct market participation in Tadawul. As per an announcement of the Saudi Arabia’s Capital Market Authority from late July, the CMA has started preparing the framework to enable “qualified foreign financial institutions” to invest in listed shares starting in the first half of 2015.

Until now, foreign institutional investors only could own Saudi shares via swap arrangements using local intermediaries. While the direct access is still a while away and, judging by the very measured and gradual implementation of changes that the kingdom has been practicing, will be phased in carefully, quick movers seem to have jumped onto buying into large cap stocks, such as globally active petrochem firm Sabic, that would be best positioned to attract international share investors.  Sabic’s stock, which rarely makes headlines for rapid price moves, leapt some 12 percent higher to six year highs within the first two Tadawul sessions after the Saudi cabinet’s decision in favor of direct access became known.

The TASI, similarly to the Egyptian benchmark, closed week 32 with the highest readings since the global financial crisis.

In a similar regulatory move, authorities in Qatar increased foreign ownership ceilings for companies listed on the Qatar Exchange. According to a report in The Peninsula newspaper, Law No. 9 of 2014 was issued to the effect that foreign shareholdings in listed companies can in the future almost double, to a ceiling of 49 percent. Aiming to attract heightened liquidity to the QE, the new law also provides that non-Qatari GCC nationals will no longer be considered foreigners in terms of share ownership.

This governmental enthusiasm for more liquidity notwithstanding, the Qatari market’s tight culture and not-too-perfect diversification even in comparison with its big Saudi neighbor, and not to mention the two markets’ divergent histories in decision processes, all suggest that the liquidity journeys in Doha and Riyadh will continue to be distinct from each other for years to come. Meanwhile, on the ground it appeared that Qatari investors started the month of August with a measure of new share buying appetite after booking some profits toward the end of Ramadan.

For the UAE markets, the tumultuous last two months suggest that some cooling off in friendly climates could be the best distraction for investors and stock market professionals in Abu Dhabi and Dubai. Low market volumes and very gradual share transactions involving market shaker Arabtec and its former chief executive, as happened in the past two weeks, sound just right in this context — and this even more so as there are plenty of new opportunities for secondary and primary market excitement looming just around the corner.

The $2.45 billion initial public offering of Emaar Malls Group, set to be the DFM’s biggest new stock impulse in seven years, is presumed to happen in September, according to a story in Abu Dhabi’s news smithy The National.

Marka, a new and yet-to-prove-itself stock with high-flying plans to feed Gulf consumers new fashion and food solutions, will make its trading debut on the DFM also next month. Meanwhile DAMAC, the luxurious developer, posted an offer to its GDR holders on the London Stock Exchange under which they can exchange their GDRs for ordinary shares, “conditional upon the admission of the DAMAC Shares to trading on the Dubai Financial Market.” The offer is valid until September 2.

And not to end here, news was leaked last week that even Meraas, the real estate company mandated by Dubai’s rulers to help drive the emirate’s latest super-mega projects such as Mohammed Bin Rashid City, has contacted banks in search of IPO advisory.

With this barrage of stimuli targeting the glands of investors it seems that only exciting times are on the program for UAE securities markets in the last third of 2014. The fact that a mandatory IPO by Zain Bahrain will finally be implemented in Manama this September, as the first flotation on Bourse Bahrain since 2010, only serves to demonstrate that excitement could also be knocking on the doors of the region’s sleepier exchanges.