Bank declares Lebanon among the riskiest investments out there

Iraq, despite ongoing security concerns, remains one of the most enticing investment opportunities

International investors have been shifting part of their attention from emerging markets to those classified as frontier markets. This attention is in the form of cash, mind you, and thus investment advisers have every reason to show their expertise in assessing frontier markets and their risk/reward potentials.

Bank of America’s Merrill Lynch this week did just that and published a primer on 42 frontier markets in Eastern Europe, Middle East and Africa (EEMEA). Of the 42 economies, the analysts highlighted six countries as offering the “best risk/reward,” among them four MENA countries: Saudi Arabia, Iraq, the United Arab Emirates and Qatar. The analysts determined that these were the best investment opportunities by correlating strong GDP growth projections and macro stability with a relatively large market size. 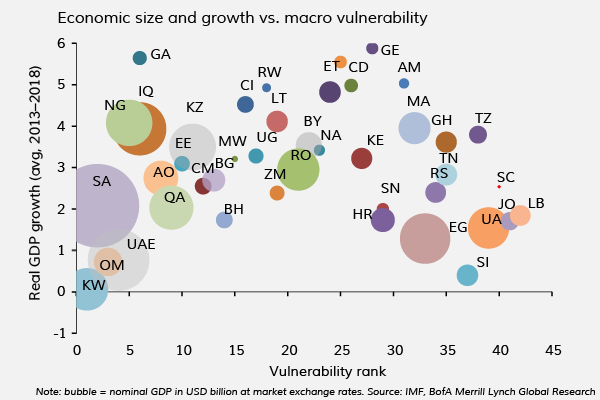 On the bad end of the risk/reward map were countries offering low growth when compared with the risk. This quarter of the map included, from the MENA region, Egypt, Jordan and Lebanon. The operative term to define bad apples in the risk/reward map was macro vulnerability, based on five indicators for currency and fiscal risks and debts. Lebanon was named the riskiest country by macro vulnerability from all 42 economies.

The dark end of the adjusted equation found space for, unsurprisingly, Egypt and Lebanon. Although both countries were not in the lowest ranks for political risk – these were Nigeria, Angola and Democratic Republic of Congo – the combination of macro vulnerability and political risk earned Egypt and Lebanon their special mentions. 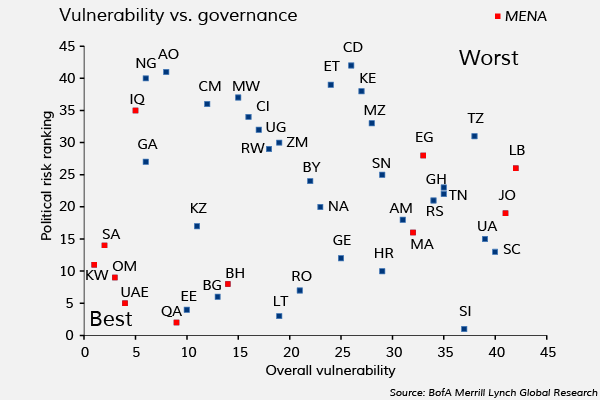 Frontier markets are understood as riskier places than emerging and developed markets. They can make up for that risk and some structural shortfalls by working harder on economic reform and by demonstrating a drive to increase productivity.

For future growth potentials in the report’s 42 countries, the Gulf Cooperation Council countries “dominate the top of the rankings, with five of the top 10 spots, thanks to low debt, high investment and savings rates, relatively low political risk and high competitiveness,” the report said.

For the final compilation of ranks under the “EEMEA frontier growth potential scorecard,” Merrill Lynch allocated top rank to Saudi Arabia, second rank to Qatar, third rank to Oman and fourth to Iraq. Ranks 39 to 42, the bottom four, were given to Egypt, Lebanon, Serbia and Ivory Coast.

The best things that the report had to say about Lebanon in its country-by-country briefs were references to the dynamism of the economy and to the “solid and liquid financial system.” The cautions were on the usual factors – impacts of the Syrian crisis and rising debt, but also a “cloudy” outlook “for much-needed reforms.”

PayPal is not coming to Lebanon

‘The startup cycle is finally taking off’