19 GCC stocks will be included in the Emerging Markets Index

The region’s securities markets showed mixed performances last week with the strongest gain recorded in Egypt at 4.2 percent for the EGX30 and the biggest drop in Dubai at minus 2.3 percent for the DFM General Index. The Qatar Exchange benchmark advanced 1.3 percent and the MSM30 in Oman dropped 1.3 percent. Between index openings on May 11 and 12 and respective closings on May 15 and 16, the Saudi, Kuwaiti, Lebanese and Moroccan securities markets were flat; the Tunisian and Jordanian markets were up by less than one percent; and the Abu Dhabi and Bahraini markets fell by less than one percent. 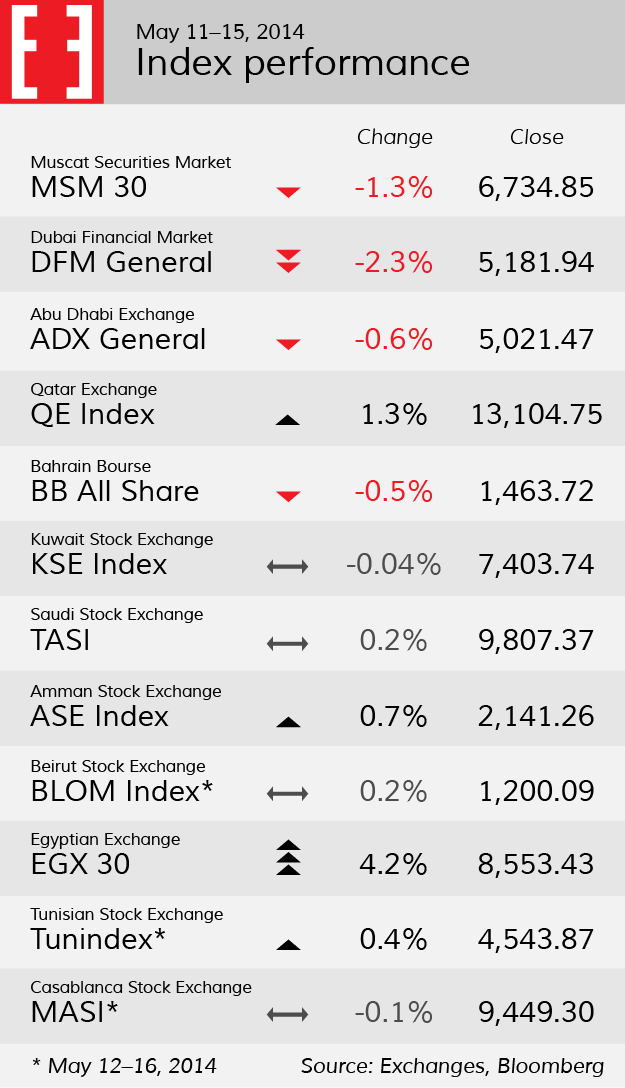 In terms of attention grabbers, Middle East and North Africa markets were wholly engulfed in the index admissions announced by MSCI late on May 14, near the end of the year’s 20th trading week. In a press statement from Geneva, MSCI specified 19 stocks from the Gulf Cooperation Council markets that will be included in its Emerging Markets Index starting June 1, along with the periodic rebalancing of indices affecting hundreds of stocks in developed, emerging and frontier markets around the world.

MSCI specified that the largest additions to its Emerging Markets Index by full company market capitalization will be Doha-based Qatar National Bank (QNB) and Industries Qatar, and National Bank of Abu Dhabi in the United Arab Emirates. Besides NBAD, UAE entrants to the Emerging Markets Index include two banking and one property stocks from Abu Dhabi plus one bank and two real estate/construction stocks from Dubai, as well as ports operator Dubai World and the company that operates the DFM. The ten entrants from Qatar include, next to QNB and Industries Qatar, four banks, one real estate stock, two telecoms and utility company Qatar Electricity & Water.

In the Gulf, stock investors on May 15 both bought and sold in response to the MSCI announcement. Some investors divested from bets that did not make the cut of companies newly admitted to the Emerging Markets Index, while others took profits by selling stocks that did and whose prices had already moved up in anticipation of the inclusion.

An example for a company that did not make the cut but had prepared for attracting more international money was DFM-listed Deyaar, a developer which had raised its foreign ownership ceiling to 25 percent in April.  Its shares fell 2.7 percent on May 15; the drop was, however, a continuation of a two week long slide that drove Deyaar about 13 percent lower from May 4 to 15. Among companies newly added to the MSCI EM, Arabtec had an interesting week marked by a single-day drop of over ten percent before surging almost 30 percent between opening price on May 12 and an intra-day peak on May 14 that also was a new all-time high for the stock. It ended the week with a 5.4 percent drop on Thursday. In a counterexample from the calm side, Abu Dhabi MSCI EM debutant First Gulf Bank saw its share price fluctuate by less than one percent in week 20, with a net change of exactly zero on May 15.

In overall index developments after the MSCI announcement, fluctuation of the native benchmark indices of Abu Dhabi and Qatar was limited to 0.1 percent up for the former and down for the latter on May 15. The DFM Index on the other hand showed a clear impact, dropping 2.6 percent on the day. Notably, Thursday’s trading volumes were the week’s lowest on DFM and ADX but QE volumes were higher than in each of the preceding four sessions.

The full list of GCC companies added to the MSCI Emerging Markets Index:

Avoiding the rise of ‘little’ Lebanon