Upward arrows in the Gulf

Investor confidence is a touchy life form that can wither from all sorts of things: to name but a few, jitters can be caused in any market by surprise board announcements, an absence of board announcements, too many rumors, too little transparency, too much volatility in tandem with too little liquidity, and even the reverse of that.

But strangely, in the year’s 28th week, Gulf investors seem to have been inoculated against all confidence-eating bugs. 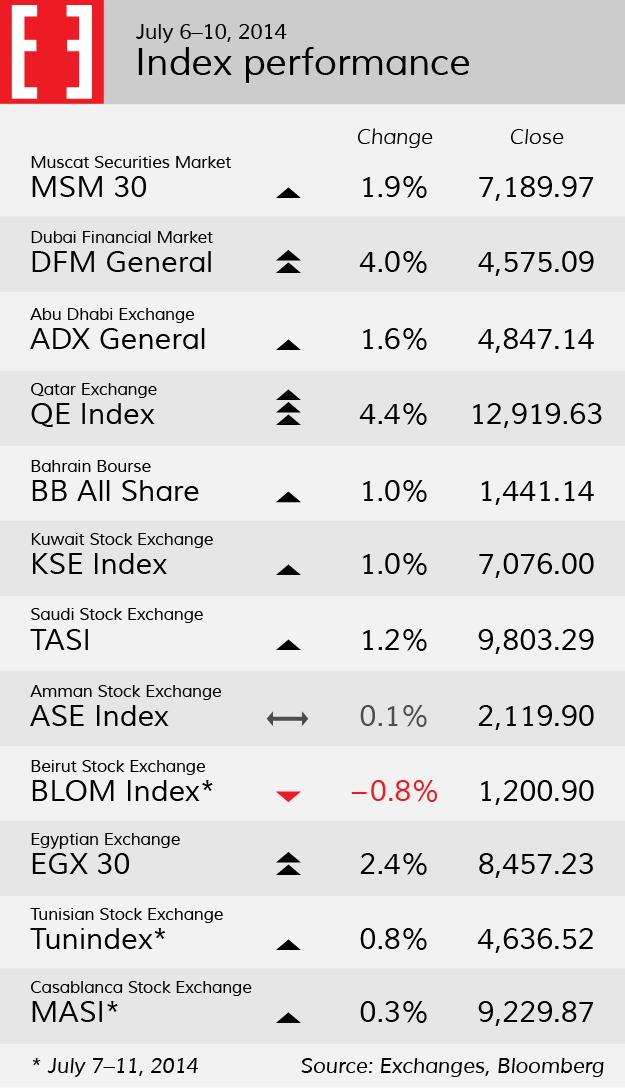 For the second week running, upward arrows dominated the weekly performance sheets of benchmark indices in the Middle East and North Africa. The top riser was the Qatar Exchange, followed by the Dubai Financial Market. Index gains on both bourses slowed down only slightly when compared with the improvements achieved in week 27, but the advancements made so far in July must be regarded in context of the index devastations seen in June on several exchanges in the Gulf Coordination Council.

Moreover, the DFM’s weekly gain was in reality a one-day affair on July 6, followed by sideways trends in the rest of the week. Abu Dhabi’s ADX General Index similarly settled into a lull. The QE index on the other hand moved up steadily during the week. However, the drop in the DFM’s vigor deserves noting, given that the recent tumbles and regroupings of the Dubai, Doha and Abu Dhabi markets have been credited mainly to the DFM as the (not so) prime mover.

Meanwhile, equity players in the United Arab Emirates will not have been horribly surprised by a report that the creation of a joint securities exchange is not likely to happen in the near future. Given that the multiyear on-and-off tale of a merger between ADX and DFM has not seen new developments in a few months, Reuters revisited the story and quoted unnamed sources saying that the issue “has been shelved.” Sources contended, however, that the merger will come to pass at some point, “if not now, later.” In other words, nil change to the status quo.

The region’s largest market, Saudi Arabia’s Tadawul, staged a repeat performance of the previous week with a 1.2 percent gain. Analysts polled by Thomson Reuters expected to see corporate earnings of major Saudi stocks improve on average 10 percent year-on-year for the second quarter, up from 7 percent in the first quarter — making the TASI one of the Gulf’s steadier upward performers in the first two weeks of July, along with Oman’s MSM 30.

The EGX 30 index for the Egyptian Exchange was the week’s third best gainer after Qatar and Dubai. More than on equities, economic attention on the Nile appeared however to be focused on recently introduced austerity measures, especially a hike of up to 78 percent in prices for gasoline and diesel that, according to a report by Abu Dhabi-based The National, resulted in lots of popular grumbling but no major incidents.

Of twelve MENA markets in Executive’s purview, only one — Beirut — dropped in week 28. The BLOM Index was led down by real estate stock in a week when the BSE reported $6.8 million in traded value.

Dropping 2.7 percent to below $13 per A share, the share prices of property developer Solidere fell for a second consecutive week. A report in the Daily Star newspaper cited unnamed sources saying that the company was not expected to pay dividends for the past year after Solidere on July 7 released audited results for 2013.

Driven by a 91 percent year-on-year improvement in land sales to $95 million, the company reported consolidated net income of $42.6 million. The 2013 net result was the firm’s second lowest in the past five years but it represented a notable improvement from $17.2 million in 2012. The company’s annual general meeting has been scheduled for July 21 after a first AGM call in June did not result in a quorum.