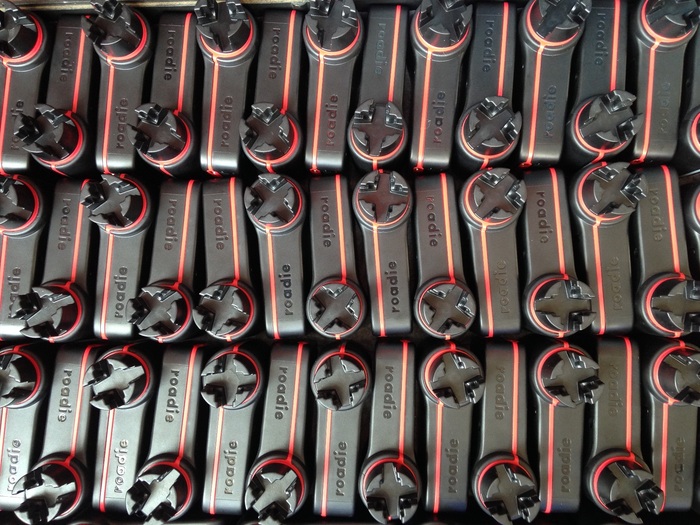 The story of Roadie Tuner is one of trial and iterations, a true reflection of entrepreneurial grit and determination. Jalgha, who studied mechanical engineering and mechatronics, brainstormed the original hardware concept five years ago. The idea was to create a device that automatically tunes string instruments, such as guitars, when placed on the pegs of the instrument. And for this project Jalgha won the 2009 Stars of Science competition and a prize of $300,000.

Acknowledging that the original prototype was clunky at best, Jalgha teamed up with Slaibi in 2012, a computer engineer who worked in audio processing before coming on board, to design the software that would be “doing what your ears would do,” in the words of Slaibi. Slaibi’s software would link the hardware product to an app. The two together are nothing short of perfectionists, with the software taking a little over a year to get to its current version. On the software side, Slaibi says, “I was pretty sure we could do it, the question was how accurate can it be, how fast can it run, in what ways can we make it … [it is] all still open to improvement in the future.” On the hardware side, the team joined the Haxlr8r accelerator program in Shenzhen, China, in 2013 to work on their prototype.

The printed circuit boards (PCBs) and plastic mold were prototyped and refined through the program, with accelerator funds of $25,000. The team launched a Kickstarter crowdfunding campaign through which they raised $179,000, far surpassing their original goal of $60,000.

As for the pricing model, the tuner is going for $99 a pop. Out of a total 3,300 shipments, 1,300 were ordered after the campaign, with the rest going to their Kickstarter backers. They are currently gearing up for a second production run of 3,000 tuners.

Going forward, the team is looking to raise $1 million in investment to design new products for musicians as well as expand on Roadie. They are also looking for retail partnerships and are in talks with big music distributors, according to Slaibi.