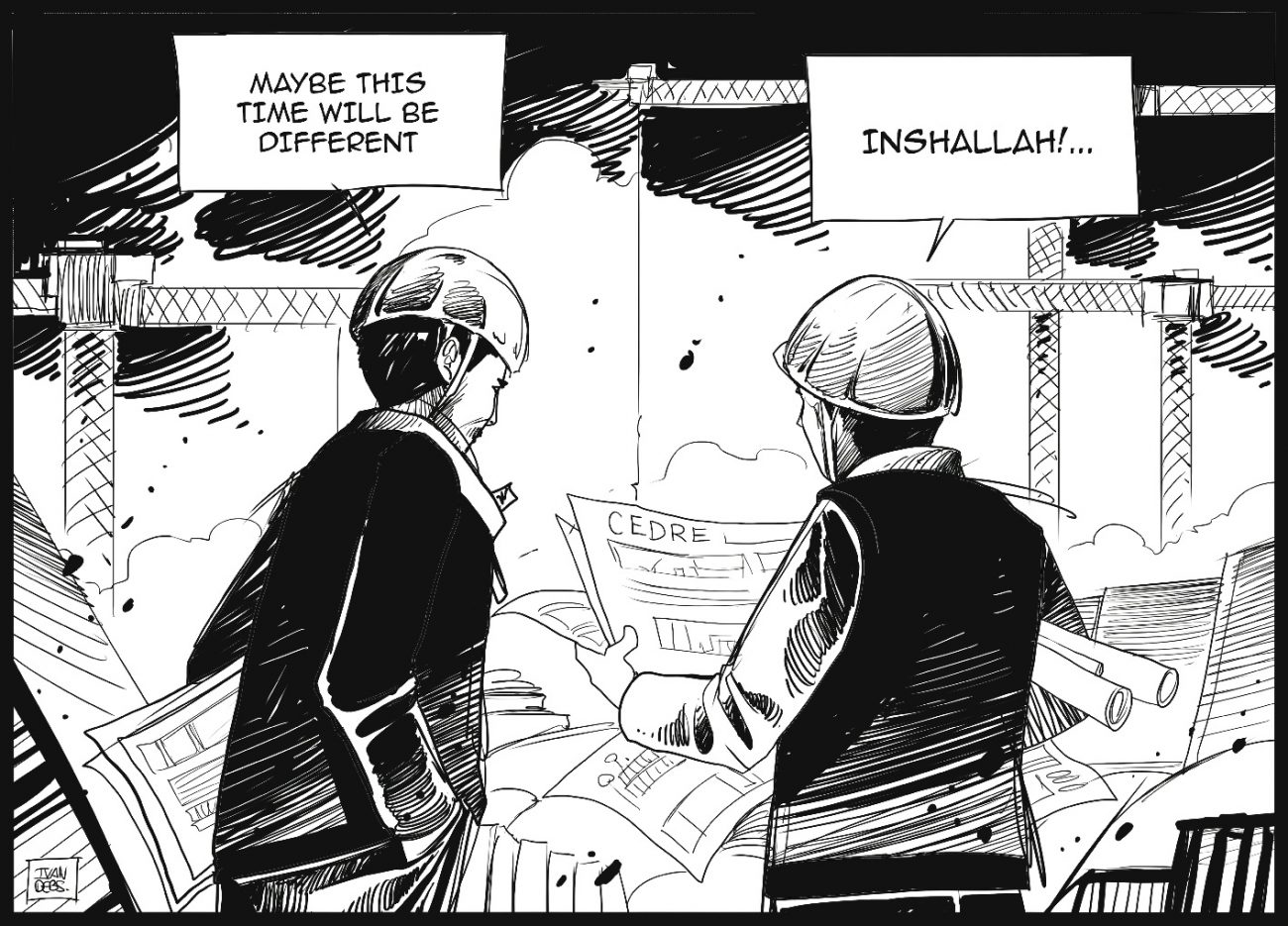 April 6 could be a very good Friday for Lebanon. Not only does it unofficially usher in the fruit season, a symbol of renewal and rebirth, but it is also the day that state officials will pitch a set of large-scale infrastructure projects to the international community and investors at the CEDRE conference in Paris.

CEDRE is just one waypoint on a roadmap for rebuilding confidence in Lebanon and stabilizing the economy. Other points along the route were the mid-March security conference held in Rome, and a regional refugee aid conference in Brussels scheduled for later in April. The response at Rome, says Christina Lassen, head of the European Union delegation to Lebanon, “sent a very strong political signal of support” (see interview). Signs of support for Brussels are also positive. The EU commissioner for European Neighborhood Policy and Enlargement Negotiations, Johannes Hahn, told reporters after a late-March visit with Prime Minister Saad Hariri that Lebanon would receive part of the EU’s pledge to grant 560 million euros for refugee aid in Brussels. The Paris conference, sandwiched in between Rome and Brussels, is the main act before parliamentary elections scheduled for May, and officials will need to wow investors enough to sell the conference as a success back home.

Lebanese officials will arrive in Paris with an infrastructure development program: the Capital Investment Plan (CIP). In its current iteration, the CIP, a development plan that will raise debt to pay for the rehabilitation and expansion of the nation’s infrastructure, was billed by an advisor to the prime minister at a recent closed door meeting as “Lebanon’s biggest-ever investment plan.” The plan, endorsed by cabinet in mid-March, calls for some $20 billion in funding for 250 projects scheduled over the next decade until 2030—though figures, projects, and timelines are likely to change (see CIP story).

Officials will carry with them three additional pillars: an economic vision, fiscal discipline measures (political parties accepting reductions in the 2018 state draft budget is pointed to as the beginning of this process), and an evolving list of structural and sectoral reforms and good governance measures. The economic vision statement is being prepared by McKinsey & Company, a management consulting firm, but the report had not been made public by the time Executive went to print. Officials have said at conferences and closed-door meetings that the vision would address how to grow Lebanon’s current productive sectors and enhance productivity, and recommend what sectors Lebanon should focus on in the future. 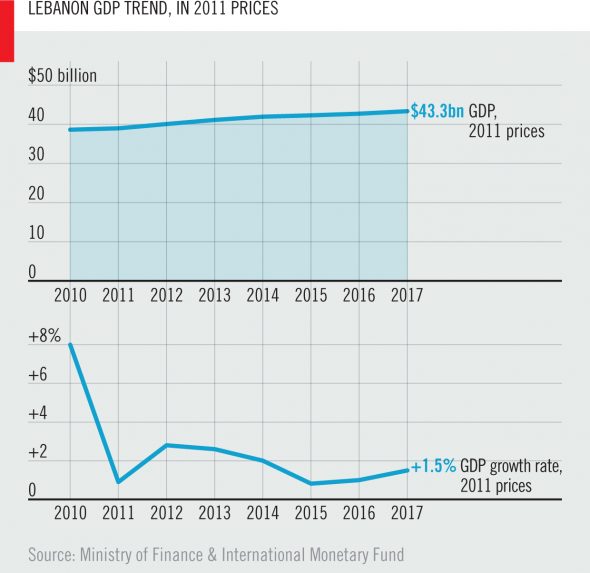 An official in the prime minister’s office told a gathering of civil society organizations at a late-March closed-door meeting that the CIP was prepared to address specific economic shortcomings: tremendous challenges in public finances, monetary policy that has exhausted all options to maintain stability, low growth rates, high unemployment, increasing levels of poverty, and the balance of payments problem. The public sector, the official said, was reluctant to invest in the economy, and Lebanon’s infrastructure is worn down because of years of low state investment and overstretched because of the large refugee population plus a growing national population.

The indicators are not good. By the end of January, Lebanon’s public debt reached $80.4 billion, or 146 percent of the nation’s gross domestic product, according to Ministry of Finance figures. Lebanon also suffers the weight of multi-billion dollar deficits year after year, thanks in part to interest payments on its debt, which has become as large and flammable as the doomed Hindenburg blimp. According to International Monetary Fund figures, Lebanon’s current account deficit averaged $9 billion per year, or roughly 21 percent of GDP. (Current account is considered an important indicator of a nation’s economic health, and in general compares imports to exports in terms of goods and the large inflow of remittances, which helps maintain the balance of payments. In Lebanon’s case, outflows are much more than inflows, because of interest payments for its debt). “If a country runs a current account deficit as high as 5 percent of GDP each year for five years, then a significant economic slowdown is highly likely, and so is some kind of crisis,” writes Ruchir Sharma, head of emerging markets and chief global strategist at Morgan Stanley Investment Management, in his 2016 book, The Rise and Fall of Nations. 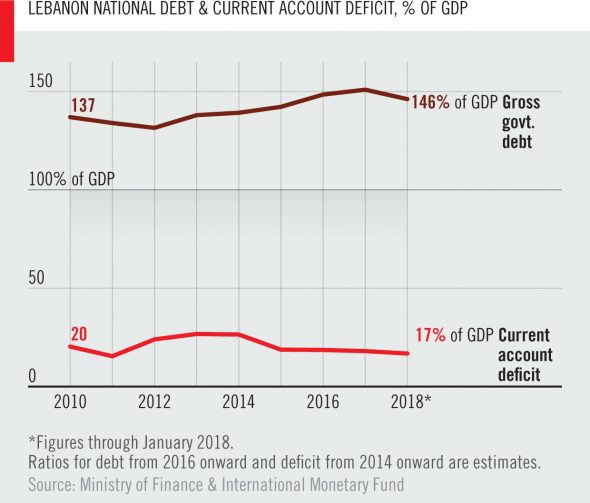 Syria’s civil war cut off Lebanon’s land routes to trading partners in the Gulf. Between 1 and 1.5 million Syrians sought refuge from conflict in Lebanon, making up a significant proportion of a country as small as Lebanon. For both the local and refugee populations, unemployment has risen and poverty rates have skyrocketed, as Executive reported in December.

Mazen Soueid, who in November was appointed to Lebanon’s Economic and Social Council, told Executive that the country’s economy has been battered by both internal and external dynamics.

The growth rate plunged from 8 percent in 2010 to an average of 1.7 percent between 2011 and 2017, due in large part to the compounding effects of the neighboring civil war but also the two-and-a-half-year presidential void, a paralyzed Parliament, and weak governments. He says Lebanon needs to reach 5 percent growth rates per year just to stabilize and 8 percent growth to pay down the public debt (see Mazen Soueid Q&A). 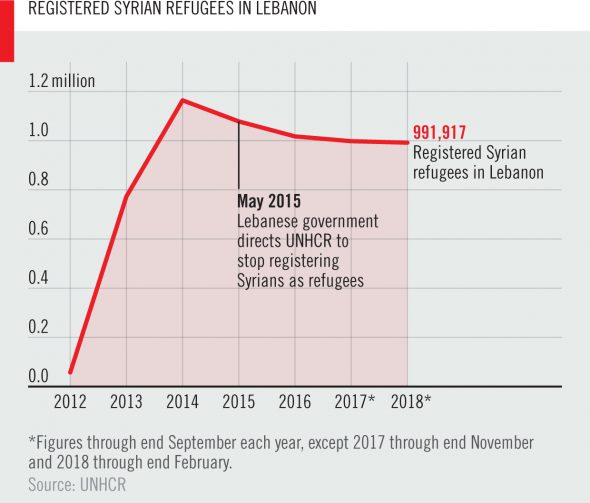 Lebanon is reluctant to commit new money to infrastructure. Between 2010 and 2016, Lebanon allocated just over $500 million per year, a yearly average of 1.25 percent of GDP, to capital investments. (Full 2017 figures were not yet available for this article.) Any country where public debts and primary deficit are massive burdens would expect the state to be reluctant to invest, and officials have expressed this reluctance simply because the state cannot afford large investments.

Lebanon appears to be in a situation where the water has risen almost above its head and its body is clutching at any chance to grab a life raft. We have been to Paris before, and made reform promises that, for some reason or another, never came to be. But there is a feeling that this time will be different, inshallah.

Lessons from the past show that the political class of Lebanon, when divided, can scupper any chance for reform. In 1998, when the balance between political powers shifted and Syrian influence (by way of then-President Emile Lahoud) was increasing, to the detriment of Rafic Hariri and Western allies, many of the projects in Hariri’s Horizon 2000 plan were put on hold or canceled. Adding in the economic difficulties of the era made for an appetite that was no longer conducive to such ambitious plans. In contrast, the period between 1989 and 1992, after the fall of the Soviet Union and the end of the Cold War, brought changes to the region, and reforms became possible at the beginning of the 1990s that were not during the previous decade. This was derailed later in the decade, when Syrian and Iranian pressure wore down Lebanon, and regional peace initiatives meant to reconcile Israel with its Arab neighbors failed. All the ambitious development that Rafic Hariri was planning was no longer possible.

That is the lesson: If Lebanon now wants to develop the country and invest in infrastructure, the government needs to have a good showing in May in order to see through its reforms. The CIP is needed by politicians aiming for leadership posts in the next government to credibly campaign for reelection. But if they do not have a strong showing in the elections then the development plan may never be heard of again. They need the confidence of the international partners and this confidence will depend to a large extent on how much support they get at the ballot box on May 6. If there is a high level of distrust in the form of low voter turnout, than the probability of implementation may decrease.

Past experience has taught the private sector to be skeptical about partnering with the Lebanese state. At an investment conference held in early March in Beirut, a Chinese businessman addressed the energy minister, who had earlier spoken about partnering with the private sector to construct power plants. “What guarantees [for] revenue can the government make?” the businessman asked. But the minister had already left, the businessman was told by the panel’s moderator.

Lebanon has had some trouble in partnering with the private sector in the past, and has had zero successful public-private partnerships, remarked Ziad Hayek, secretary-general of Lebanon’s High Council for Privatization and PPP, in a September 2017 interview with Executive. One example from around the turn of the century is the story of Libancell and Cellis, the two cellular companies operating Lebanon’s first-generation mobile network. Their contracts had arbitration clauses, and when the government moved to terminate the contracts prematurely the companies filed for arbitration.

In that case, says Marwan Sakr, a partner at the law firm SAAS Lawyers who specializes in arbitration, the State Council, Lebanon’s highest administrative court, issued an opinion that the arbitration clauses were null and void and that the state could not arbitrate, and ruling instead the court to be the body hearing cases against state entities. In 2002, Lebanon amended its arbitration law to allow arbitration for any state entity, with the Council of Ministers approving the agreement to arbitrate between state entities and other parties, Sakr told Executive. (The number of civil suits against state entities is said to be quite large, according to lawyers Executive interviewed for this story. Executive’s information request to the State Council for the number of civil suits heard by the court against state institutions procuring projects was not answered, and after going to the court after not being able to follow up on the request by telephone, Executive was told that staff are instructed not to pick up the telephone). 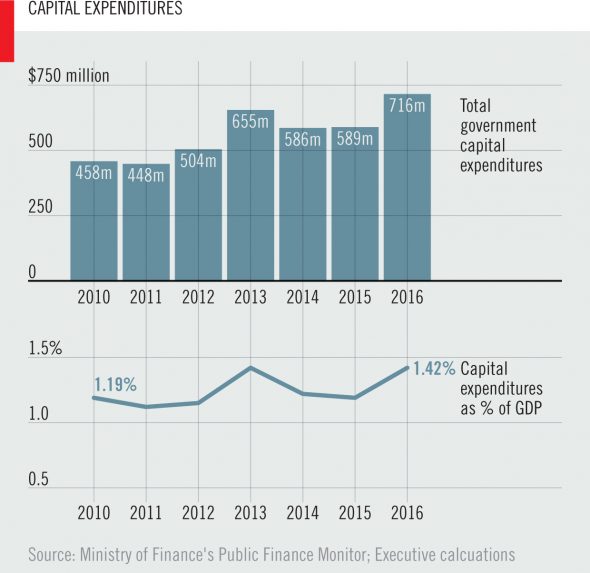 It’s not yet clear whether the CIP can prove to investors that Lebanon is worthy of their confidence. Mohammad Alem, a senior partner at the law firm Alem & Associates, told Executive that potential investors the firm had met with had expressed interest in knowing what is in the CIP, and in investing in Lebanon, but few were excited, citing concerns regarding corruption, bureaucracy and red tape, or political interference in bidding processes. He said that foreign investors, including institutional funds, have not shown much appetite yet, and he questions the overall viability of the CIP and its projects.

Investors that Executive spoke with directly were more optimistic. Philippe Ziade, for example, is going to Paris with a wishlist. Ziade, the founder and chairman of Growth Holdings, which on its website claims $3 billion in assets across the real estate, technology, construction, hospitality, and entertainment sectors, wants a robust legal framework for independent power producers to make the market more competitive and to codify the procurement process. He told Executive on the sidelines of an energy conference in mid-March that those measures alone would improve financing costs. Ziade also wants feed-in tariffs to allow anyone to produce electricity (usually in the form of rooftop solar panels) from their home and generate returns by selling power to the state.

Investors and fund managers that show up at CEDRE have the option of investing in Lebanon or investing elsewhere, and they will be looking for jurisdictions that provide lucrative returns and lower levels of risk. Reforms may be a prerequisite to obtaining investors’ commitments, and the list of reforms is long, broad, and ever growing. In general, investors will ask for fiscal discipline, appointment of regulators, and the passing of a backlog of legislation.

The way the state operates must change: that’s the consensus ahead of Paris. Now might be the last chance for serious reforms to prevent the country falling into the abyss, and who knows what would happen to Lebanon deep down in the dark.