It has been one of the most reassuring factors in the Lebanese economy—some might be inclined to say nearly the only one—that local banks maintained their strong financial standings during the past years and have been perfectly assuming their role in financing the economy. Beyond their financial performance, which is highlighted in the analysis below, banks have also been implementing adequate corporate governance standards and nurturing good transparency and disclosure practices. The Lebanese have every reason to conclude that the robust financial fundamentals, rigorous adherence to standards under supervision by the central bank, and solid risk profiles put Lebanese banks in a good position to reap the benefits of an economic upturn locally and regionally.

The analysis below is based on the consolidated performance of 26 banks that account for 97 percent of banking activities. Fifteen of these 26 banks are defined as comprising the Alpha banking group with deposits above $2 billion (per bank) and the other 11 banks are classified as the Beta banking group with deposits between $500 million and $2 billion. The number of Alpha banks increased from 14 to 15 as of December 31, 2017. 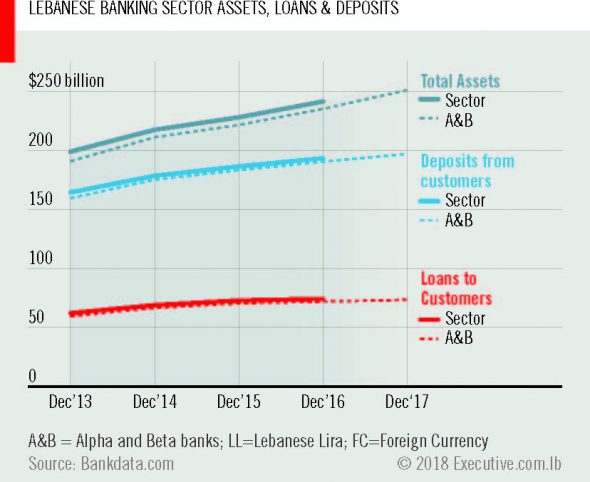 Total assets stood at $241 billion at year-end 2016. Customer deposits, which represent more than 80 percent of consolidated assets and have increased by 15 billion over the past two years, totaled $193 billion, while consolidated loans represented $74 billion in 2016. A second look shows that domestic deposits have increased by $18 billion while foreign deposits decreased by $3 billion. In parallel, domestic loans to customers have increased by $5 billion over the period while foreign loans have remained at the same levels since December 2014. Based on the figures of Alpha and Beta banks, assets could reach around $260 billion at year-end 2017, deposits could surpass the $200 billion mark, and loans could reach $75 billion for the sector at year-end 2017.

The breakdown by currency reveals that the dollarization of domestic deposits remains steady at 64 percent while dollarization of domestic loans decreased substantially from 74 percent to 71 percent during the period under study, further reasserting the Lebanese Lira (LL) as a lending currency. Much has been said and written on the impact of the central bank’s stimulus packages and the fact is that banks have injected more than $3 billion worth of loans denominated in LL in the past two years with a growth of 13 percent compared to a 4 percent growth in total domestic loans.

In the light of growing regional and local tensions, 2014 was the last year where activity growth registered double-digit figures. Since 2015, overall activity dropped to an average growth of around 5 percent and the domestic/foreign breakdown reveals that the slowdown is due to foreign aggregates that were hit by the devaluation of currencies in major markets of presence, namely Egypt and Turkey. In addition, some banks have deconsolidated their foreign entities in Armenia, Russia, Cyprus, Syria, Iraq, and Sudan, further translating into a decrease in balance sheet aggregates. 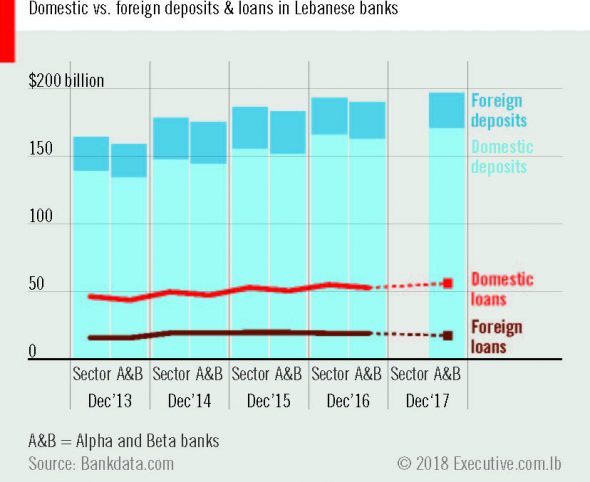 Foreign activity represents around 16 percent of deposits and 27 percent of loans. It is interesting to compare the ratio of deposits and loans per branch locally and abroad. In fact, Lebanese banks are able to replicate their local pace of circa $50 million per year per branch in terms of loans, but foreign branches are collecting only half the deposits of domestic branches, respectively circa $75 million and $150 million per branch per year. Lebanese banks operated a network of 1,427 branches at year-end 2016. Of these, 359 branches were located abroad after the closure of 52 branches in foreign markets in a development linked to the deconsolidation of foreign entities mentioned previously. The domestic network of 1,068 branches grew by 29 new branches in the past two years.

Liquidity is on the rise at 35.15 percent, well above regional averages, with liquidity in LL rising to 37.55 percent and liquidity in foreign currency (FC) registering 34.08 percent. In parallel, the loans to deposits (LDR) ratios remained stable throughout the period under study and well below regional and international benchmarks. At end of 2016, the latest observation currently available for this analysis, LDR stood at 38.36 percent overall, broken down into 27.11 percent in LL and 43.32 percent in FC.

The persisting regional and local challenges have slightly impacted asset quality with an increase in the ratio of doubtful loans to gross loans that rose to 6.55 percent at end 2016, similar to its 2014 level but slightly higher than the 6.37 percent registered in 2015. In parallel, the coverage of doubtful loans stood at 75.52 percent, up from 75.44 percent in 2015 and well above the world average of 68.70 percent in 2016. In addition, Lebanese banks increased their collective provisions to a new high of 1.55 percent at year-end 2016. 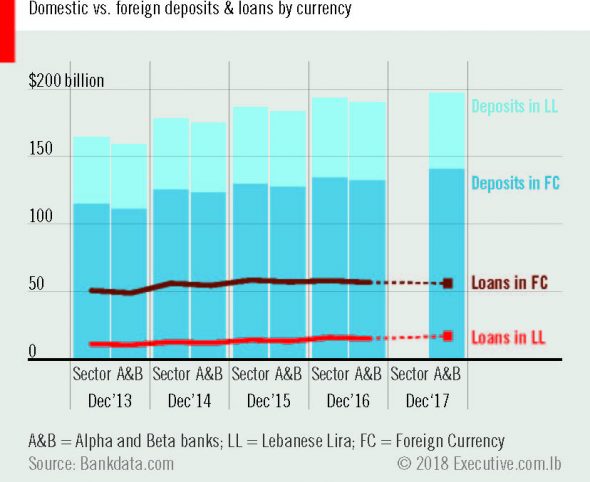 Net profit increased by around 13 percent to $2.5 billion at end 2016 with domestic profit dropping from the mid-80s to low-70s as a percent of total net profit. Return ratios followed suit with return on average assets (ROAA) and return on average equity (ROAE) nudging up to 1.06 and 11.23 percent respectively. In comparison, the MENA average ratios stood at 1.50 and 11.40 percent respectively in 2016. It is worth noting that Lebanese banks have increased their equity by around $3.5 billion over the last two years under study. 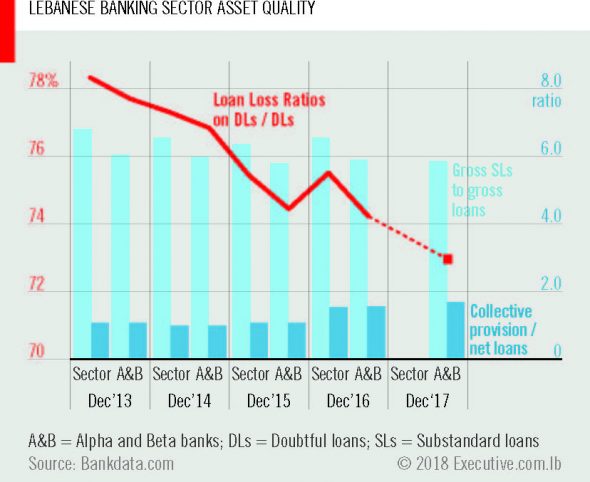 The analysis of components of return ratios show that margins and spreads remained stable throughout the period under study at around 2 percent and 1.90 percent respectively. In parallel, the net operating margin was equally steady at around 34 percent while cost to income improved, dropping from around 50 percent to 44 percent over the period compared to a world average of 55 percent at end 2016. 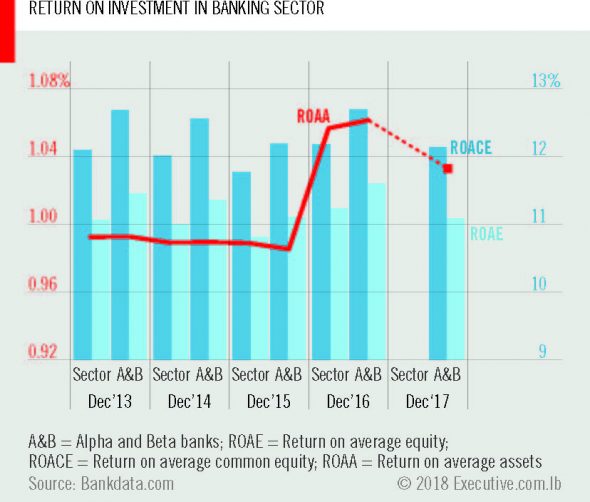 News on the house of Saradar