Photo by: Albatross via Getty Images

Some view it as a race against Israel Our neighbor—which is definitively not stealing Lebanon’s gas—closes its first offshore licensing round on November 15. Israel had previously awarded exploration licenses directly.Lebanon just postponed the close of its own first round—yet again—from September 15 to October 12. The new deadline, however, actually seems to have been chosen this time based not on the usual insistence of local officials, but on comments from Dharmendra Pradhan, India’s oil minister.

The curious case of ONGC

In July, after a meeting with Lebanon’s Minister of Energy and Water Cesar Abi Khalil, Pradhan tweeted: “The meeting was important in the context of @ongcvideshltd participation in the upcoming bid round for offshore gas fields in Lebanon.” ONGC Videsh Ltd is India’s national oil company, which had prequalified as an operator in Lebanon’s first offshore licensing round in April. In September, however, Pradhan told Reuters, “We will definitely bid for Israel’s oil and gas blocks.” It is unclear, however, how much capital the company has to deploy in either jurisdiction, let alone both. The Mediterranean Sea gets deep fast off the shores of both Lebanon and Israel. Drilling in water more than 1,000 meters deep is expensive, and the Indian company said in an August interview that its planned $150 million exploration budget will focus on Colombia, Kazakhstan, and Bangladesh.

Assuming ONGC is seriously contemplating bids in the Eastern Mediterranean, if Lebanon closes its round before Israel, it could capture ONGC’s bid at a time when officials admit the possibility that not many offers will come rolling in. If Lebanon closes after Israel, however, ONGC could bid to the south, complicating a later bid in Lebanon from a political—and possibly even a legal—perspective (Lebanon still technically has a boycott office at the Ministry of Economy). The Lebanese Petroleum Administration (LPA) would not comment specifically on ONGC (or any other bidder), but LPA president Wissam Chbat told Executive in an interview that “we might end up in this situation” (of having only one bid), but “we haven’t been expecting [only] one bid.” 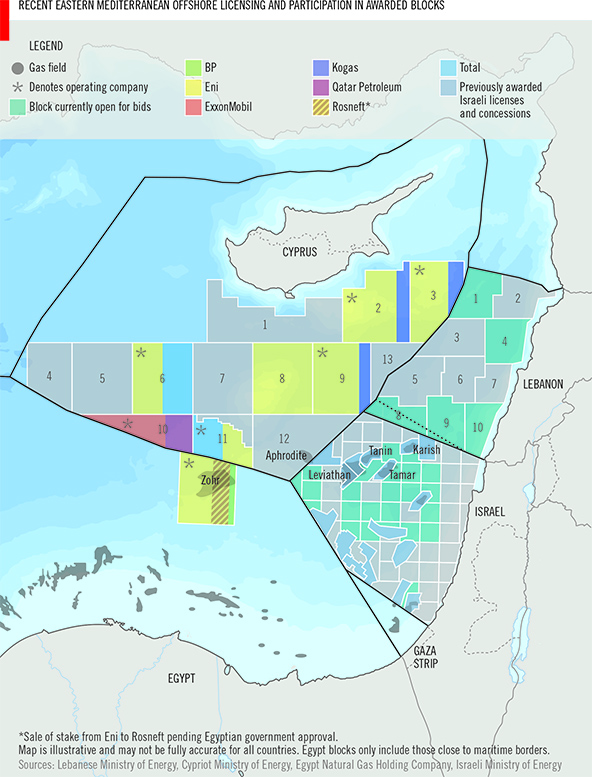 While 51 companies are prequalified to bid in Lebanon, all but five went through the prequalification process back in 2013. It is difficult, therefore, to predict how many will actually bid, especially given that Lebanese law requires companies to form consortia with a minimum of three members  in order to submit bids; each consortium must include an operator, and there are only 13 prequalified operators. This means that even if many non-operators want to bid, they cannot do so without wooing one of the 13 operators. On the one hand, extensive seismic surveys that look promising, coupled with big natual gas discoveries nearby, suggest that Lebanon should be attractive as a greenfield investment. On the other hand, the industry currently has a suppressed appetite for the expensive deepwater drilling required to prove whether or not Lebanon has oil and/or gas reserves. Executive has repeatedly reached out to the prequalified companies for comment on their plans in the past and has been repeatedly reminded that companies do not comment on such matters. In a statement released shortly after the most recent postponement the LPA said that part of the reason for the delay was to allow companies to form consortia—suggesting bids are indeed being prepared.

What to expect on the big day

Once bids are submitted, Chbat says the LPA will have three days to report back to the cabinet about which companies bid on which blocks. The LPA will then evaluate the offers. For the commercial offers, this means running nine different simulations (which include three volume assumptions and three price assumptions) and taking an average of the results. Companies will also be scored on their technical offers, and based on both outcomes, Chbat says, the LPA will choose provisional winners for each block. The list of winners will be provisional because the government/LPA can negotiate with companies on their technical offers, which include proposals for additional surveys of Lebanese waters, as well as the number, location, and depth of the wells they plan to drill. The offers are negotiable, Chbat explains, because requesting slightly more surveying, or a slightly deeper well, results in more valuable information for the state.

The LPA has slated one month for evaluating offers and choosing provisional winners before sending that recommendation to the cabinet, which will ultimately approve which contracts, if any, to sign. While the LPA announced in April that contracts should be signed by November, legally the government has a full six months after bids are received to sign an award. Chbat says the bidders will be announced when the LPA submits its report on the subject to cabinet. Until then, it is a waiting game.

Drive … At your own risk

News on the house of Saradar