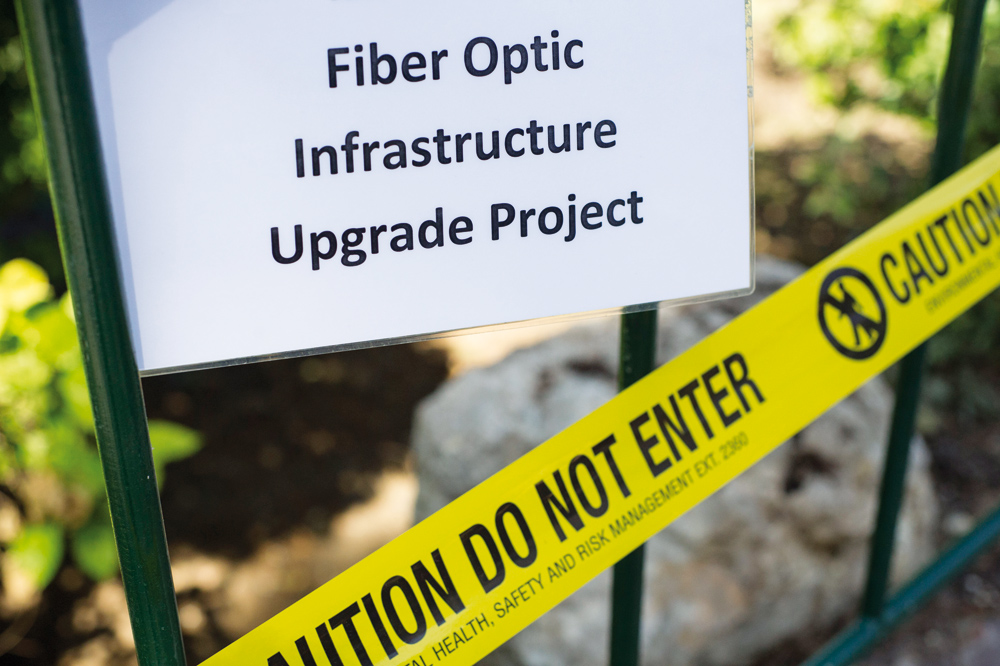 Abdel Moneim Youssef is not your average public servant. If there is one compelling impression from meeting him in person, it is that there is much more to him than meets the eye. In this sense, his office at the Ministry of Telecommunications is revealingly unrevealing: large but functional, not overtly more guarded than the premises of other Grade 1 national officials, and adorned with memorabilia — fittingly in his case, blown-up images of historic Lebanese phone cards decorate the spacious waiting area.

But the bureaucrat has certain attributes that pit him as quite exceptional for a public servant. For one, he singlehandedly holds a tremendous amount of power over the telecommunications sector. He is at once director general of operations and maintenance at the Ministry of Telecommunications and chair–general manager of state owned fixed line operator Ogero, which acts as an internet service provider while simultaneously being responsible for selling international capacity to the private sector.

The man is also incredibly elusive. Reaching Youssef required going through specific channels that are not usually required for journalists to meet public servants.

Then, there are the opinions people hold of him. Everybody involved with telecommunications in Lebanon seems to have one. Some view him as highly self interested, others regard him as no different from any other government employee — and some of those in the know even provided Executive with two conflicting views, describing him as “extremely smart and charming if he wants to be,” but also going as far as alleging that he must be “a maniac” or have a “crazy conspiracy theory” — speaking on condition of anonymity, of course.

But for anything telecom sector related, Youssef is the go-to person. He is Mr. X — or Ms. X, as Executive termed the theoretical, all knowing, unknown telecoms guru. He is the one who should be able to — and certainly is able to — answer basic questions on the minds of the Lebanese. Questions such as why has the new fiber optic internet backbone not been turned on yet? Why isn’t Ogero granting international capacity to private sector ISPs? Why is our internet so slow and expensive?

Before Executive encountered Youssef, we were told he had a knack for derailing a topic by either losing his interlocutors in details or with his charming personality. Sitting down with him, it quickly became clear that he was not going to give us any information — much less a straight, serious answer. Youssef can talk, knows how to waste time and is a master of deflecting inconvenient questions. Besides not allowing recording equipment, Youssef would craft his answers in a way to not only avoid the topic, but also be unspecific to the point of making generalization into an art form.

When asked why the new fiber optic network contracted in 2011 — which now connects the bulk of the central offices in Lebanon as well as many of the country’s heavy users such as universities and hospitals — has not been turned on, Youssef immediately retorted on the semantics, not the substance, of our question. ‘Heavy users’ is a meaningless term, he shot back, embarking on a diatribe arguing that the term was “not even a word.” If you look up ‘heavy users’ on Google, he said, it would yield no results. He went further to say that ‘heavy users’ was only a term used by people in Lebanon, to describe a concept that does not exist in the rest of the world’s parlance.

Executive of course does not know when Youssef last googled the term, but we can confirm that a March 2015 search yields high level international technical sources as using the term ‘heavy users’ in important discussions — such as the net neutrality debate — and for considerable time in exactly the same way in which it was entailed in the question posed to him.

To a question about why our new, state of the art fiber optic backbone had not yet been switched on to carry data traffic, Youssef retorted with an ill informed rebuttal about heavy users. The question remained unanswered, but Youssef’s response served a purpose: the longer the talk about definitions, the more time Youssef won as the clock counted down to 6 p.m., when he informed us he had another meeting.

At a certain point in the interview — and though his English appeared highly adequate for claiming knowledge on the appropriateness of the technical terms he disputed — Youssef became apologetic about his poor command of the language, excusing himself, in English, as having been “French educated” and switched to arguing in French from that point on.

There are many strategies to waste time through talking, but it is an art to talk for 40 minutes and provide answers that are as far from clear as they are far from being quotable, in the sense of saying anything of informative value. “What’s the relation between internet and fiber optic?” he barked at Executive when once more pressed for an answer as to why the fiber wasn’t turned on.

The discussion ascended to heights usually reserved to the performances of the Théâtre de l’Absurde as Youssef advanced to question the premise of a newly existing fiber optic network by asking us how we were sure it was really there. The question was surprising, given that the network had been budgeted, tendered and indeed installed according to various statements given to Executive by telecommunications consultants, private sector contractors and vendors who had worked on the project — and notably, by advisors to the Ministry of Telecommunications. Taking a somewhat contradictory position to the gauntlet just thrown that was perhaps worthy of a Camus essay, Youssef then went on to assert that of course we have fiber optic internet.

But this statement is too vague to be understood as a claim that the new network is indeed on, as Lebanon does have an older fiber optic network built over a decade ago that links five central offices together, which we understand is in operation. This network was originally built only to carry Ogero’s internal traffic, and was not meant to be used as a wide area network as it is used now, to carry internet traffic.

When speaking, it is very common for one to forget to be precise and qualify what is being discussed, so any potential misunderstandings can generally be clarified through merely asking a simple follow up question. When pressed for a more specific answer, as in whether Youssef was referring to this older network, or if he was claiming that the new network was, indeed, turned on, he exploded.

The bone of contention appeared to be that Executive had called the fiber optic network “old,” or as he reworded it, “ancient.” He thus addressed this supposed question of network longevity — which Executive had not asked and not intended to ask — with a discourse on how fiber optic cables have a very long lifespan.

Indeed, fiber optic cabling, provided it is properly insulated under the ground, is essentially good forever. Yet when it comes to being able to carry an entire country’s capacity, no matter how long it physically lasts, it will not be able to carry traffic it was not designed for.

Youssef added that the older fiber that was built from 1994 to 2000 is only being used at 35 percent of its capacity.

But in an attempt to revert back to the matter of whether Youssef was actually claiming that the new network was off or if his claims were just stating vague facts in order to confuse, Executive asked him if he had signed any documents approving the activation of the newer network.

To close the discussion, he invited Executive to call up all of our sources and tell them they were wrong. “They are completely ignorant,” he said. Every source we had cited in our interview — the advisors to the Ministry of Telecommunications, the consultants, the internet services providers — were implied. All of them.

After we dismissed some ideas implied by our interviewee — such as buying shovels and digging trenches to check for the presence of cables, or calling respected experts to insult them — the net gain of 40 minutes’ exposure to Youssef’s mastery in haranguing was thin. What we learned was that the questions we were asking, for some reason, were questions that Youssef did not want to answer.

If there is one thing Youssef can be congratulated for, it is his prowess in semantics. Not unsimilar to the style of long, colorful discourses of thesis and antithesis that are preached by certain prestigious schools in Paris in order for their students to succeed in oral presentations, Youssef can talk. While we leave him with new appreciation of how one can use this talent in a top public administrative position, we can only speculate as to how this public servant uses this ability for the greater good of national telecommunications.

What we no longer wonder about is his charm, or that he knows what he is doing. As he shakes hands with Executive before ushering us out of the door, smiling, he apologizes for being so “disagreeable.”