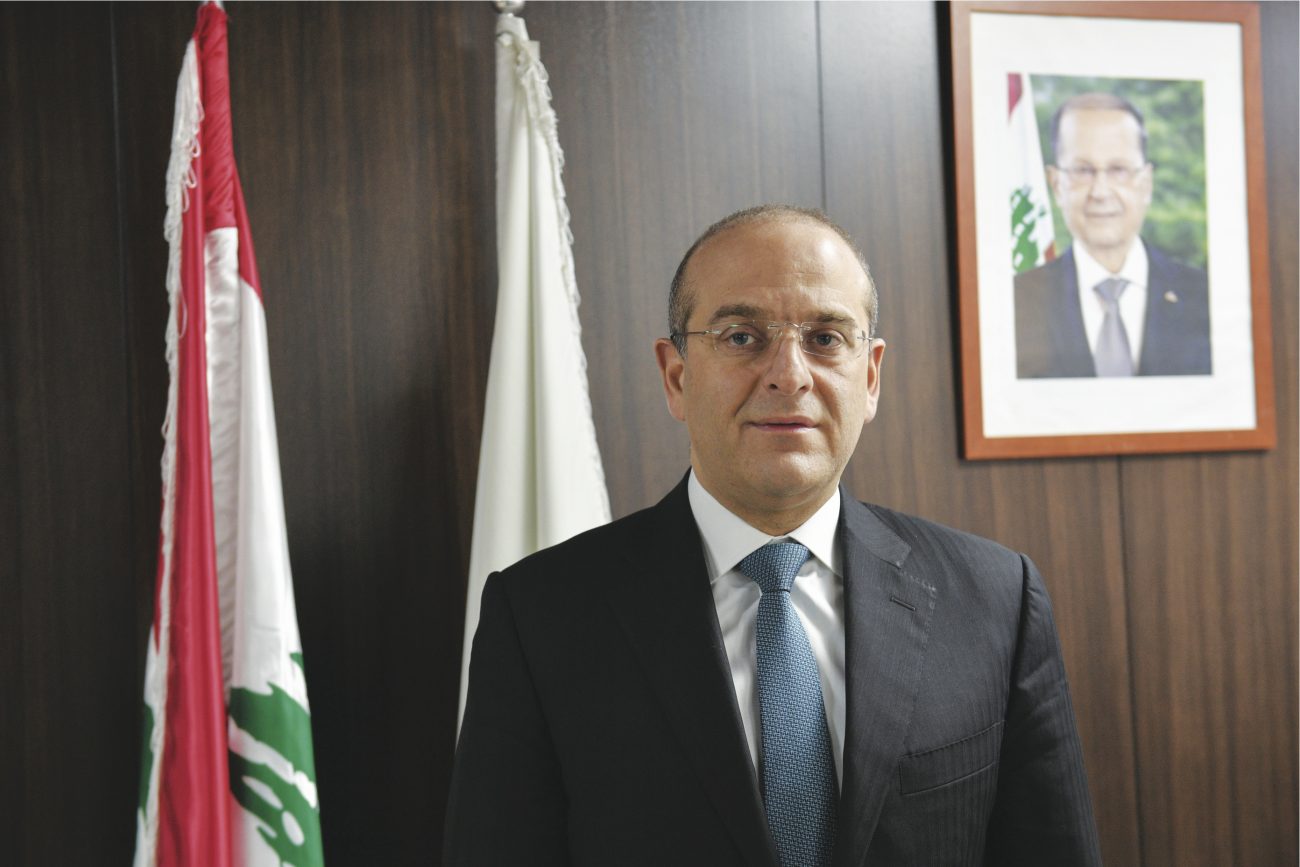 Executive met with then-caretaker Minister of Economy Raed Khoury to discuss McKinsey & Company’s economic vision (commissioned by the government in late 2017 and published in early January), the ministry’s progress in regulating private generation of electricity, and the political and economic situation of Lebanon ahead of mid-January’s Arab League Economic and Social Development summit, which was hosted in Beirut.

E   As the government in its caretaker status is not empowered to make all needed reform decisions, our impression is that ministers such as yourself are trying to keep the public confidence from deteriorating, but that there are many challenges. What can you actually do in this situation?

There is a tremendous campaign against our economy and our country from internal factors or internal politicians, some media, and there are some external factors, because [various interested parties] know exactly how our economy is so sensitive. The backbone of our economy [relies] mainly on trust and being able to attract foreign deposits and FDIs. And they know our economy is not independent from external factors. If our economy were dependent on internal strengths from industries, agriculture, and technology, we would be more immune to external factors. On the other hand, we cannot ignore the economic problems that have been [accumulating] for the last 25 years, so what we are seeing now is only a result of all of the bad management of the government vis-a-vis the economy, starting with a lack of vision [overall] to the destruction of the productive sectors.

There are many other factors, like the corruption that has been mounting over the years. [This] is a very important negative factor for our economy, because there are a lot of taxes that are not collected, and at the same time it creates a trust issue for any investor [thinking of bringing investments] to Lebanon. There are problems related to the environment, the sewage, and the problem of electricity, to which we have still not been able to find a solution. All of these things have accumulated, and the most important thing, and a result of everything I have mentioned, is the mounting public debt compared to our GDP.

E   Is the idea of an increase in corruption not mainly driven by a self-reinforcing perception that can be likened to a self-fulfilling prophecy? How do you yourself see the problem when, as in a recent accusation leveled against you, allegations of corruption are made, but no mention is made of the fact that you, as a minister of economy, stepped back from your role in an investment bank when you started to serve in a ministerial role? If that is the case, you have actually moved against corruption but the perception of that seems not to be there. Can you do anything to improve the perception of the state and government as corrupt?

I disagree with the perception, because I am probably one of the few fighting real corruption. I cracked down on the generator mafia, which has been a taboo for the last 30 years. We have to face [corruption]. And corruption has many meanings because it has many faces. Corruption could be stealing money and taking contracts. It could also mean a conflict of interest, as you mentioned, and a conflict of interest could also be if I’m going to be nominated to be a deputy and a minister at the same time [because a parliament deputy cannot exercise oversight of themself while also serving in cabinet]. For myself, I did what I needed to do in terms of differentiating between my private job at the bank [and my public office]. [In this regard], managing conflicts of interest is the name of the game. Nothing comes for free. If you’re going to bring in a minister who is a professional, [they likely] have their own business, and this comes with a conflict of interest. But [such a scenario] is better than appointing a minister who does not know what they are doing.

E   In a January television interview you mentioned that over 100 generators have been confiscated, and now 70 percent of generator owners are issuing bills that charge per kilowatt hour usage. What is the main driving force for you in targeting the generators? Is it an issue only of corruption? Or is it an issue of restructuring the value chain of electricity?

There are two electricity providers in Lebanon: the government and the private generators. They are two separate issues, in terms of coming up with a solution. The normal thing is to have the government [meet electricity demand], but the fact is that the government is unable to [do this]. These generator [operators] have been [taking advantage of] the people by giving them the impression that they are so powerful, can do whatever they want, and can charge whatever they want. But they are just taking the people hostage.

So what we are trying to do, and we achieved it, is to crack this mafia for the benefit of the people. It turned out to be true that after they introduced the meters the monthly bill decreased tremendously, for example, from $200 to $60 or $70—and [operators] are still making money. The impact is huge because it affects every individual in Lebanon. The people have felt the difference [since at this time] the most important thing for people is to save some money. Saving this amount of money per month is a huge, huge saving for any household, especially for the poor and the middle class. And at the same time we calculated a margin for these generators. [Because of what we did], operators are still making money, [are able] to pay their costs, [covering] appreciation, fuel, and everything else, and still have a profit margin.

E   Can this be replicated across all the inefficient areas of the economy where pricing is not optimized socially. For example, can you do the same thing with transport or with other private sectors?

No. We were able to control this because generating electricity is the job of the government. So these people are not legal, and given their status of being illegal, we are able to control them. For other sectors it depends, because we are, at the end of the day, a free economy.

E   Do the private generators pay tax on their income from selling electricity?

No, they don’t. They’re outlaws, and the government has accepted that because they fear that they are not able to do their duty of providing electricity.

E   That leads us to the McKinsey report because by first impression the report is assuming the government has a lot of power in directing the economy, which practical experience over the last 20 years indicates Lebanon does not have. What is your economic model for Lebanon to implement?

First, before fighting over how we want to distribute the wealth, we need the economy, and then we will fight over how to divide the wealth, yes? So the idea is that we are going to make the cake bigger and then divide. We took into consideration both, how we want to increase [the size of] our economy, and then how we are going to create jobs, because creating jobs is a social aspect, and we believe that productive people will be rewarded at the end of the day and non-productive people will not be rewarded.

The main part of this [economic vision] is not only the creation of 370,000 jobs, it is also the spread of wealth because the productive sectors are across the whole country not only in Beirut or Mount Lebanon. Second, you can only create a middle class if you create big companies because the middle class is mainly middle management, and that can only exist in big companies, not small ones. In order to have big companies, you have to be competitive so you can grow and be able to pay hundreds of thousands of salaries for the people—and this is the middle class that we have eliminated in Lebanon over the last 30 years.

E    If we listen to the street then there is an accusation that what exists in Lebanon is a rentier economy of unproductive elites that are depriving the work-willing people of economic opportunity. So how is this economic reality and the need to rectify this bad existing “model” reflected in the plan and in your vision beyond the McKinsey plan?

I agree that currently the situation is like this, but you need to understand why it is like this and what we are trying to do; it is useless to describe the situation without understanding the reason. [Lebanon’s economy is currently structured to increase] the gap between the poor and the rich. Creating a productive economy will decrease the gap. Why? [Because of high interest rates, the wealthy class is parking their money in the bank instead of putting it to work by lending it out, while the have-nots are struggling to make ends meet. And there is less borrowing because of the higher interest rates]. [If investments could be channeled] into industries or productive sectors, this turnover of money would have been circulated 10 times in the economy and [would have] created more jobs, creating [and distributing] more wealth. The McKinsey study for the government plan addresses exactly this issue at its core. I hear some magazines or those that call themselves economists describing the situation, and they don’t understand why it is like this or what the benefit is of creating productive sectors. What’s the use of a $100 million deposit in a bank if it benefits one person? But if this $100 million [is channeled] into five to six industries, it creates thousands of jobs, generates more money, and the people make more money. So this needs guidance from the government, and that is what we are trying to do.

E    How do you assess the state of affairs today, in early 2019, versus at the end of 2017, when you commissioned the McKinsey report—before parliamentary elections, before the confidence boost from CEDRE, and before the government deadlock became visible? In terms of ability to implement, do you see structural reforms and economic developments as more likely today than about a year and a half ago, when the decision to commission McKinsey was taken?

If some of the ministers or public opinion at that time didn’t believe in what we are doing, I think now they should believe, given the situation. And I think tackling the core of the problem is the most important thing. We don’t want to take medicine [to mask the symptoms]; we want an operation to solve the problem. [The medicine] probably helps you for a couple of months, and then what will happen? And I really believe if we don’t [do the operation], then we are in deep shit.

E   Do you want everyone in government, Parliament, and the population as a whole to read the McKinsey report on your website?

The stakeholders are everybody—the citizens, the government, the [state] administration, the international community, funds, banks, the World Bank—the report is very global and very reachable for everybody. It’s more than a study; I want to make this a culture in which every citizen understands to a certain level that there’s a government with an economic policy for the productive sectors, and we are moving in the same direction. And this also helps [boost] confidence because you can’t be lost as a citizen, you have to have an identity. It’s not an identity only because you are Lebanese, it is [an] economic identity. If you want to create an economy, this is the way to do it.