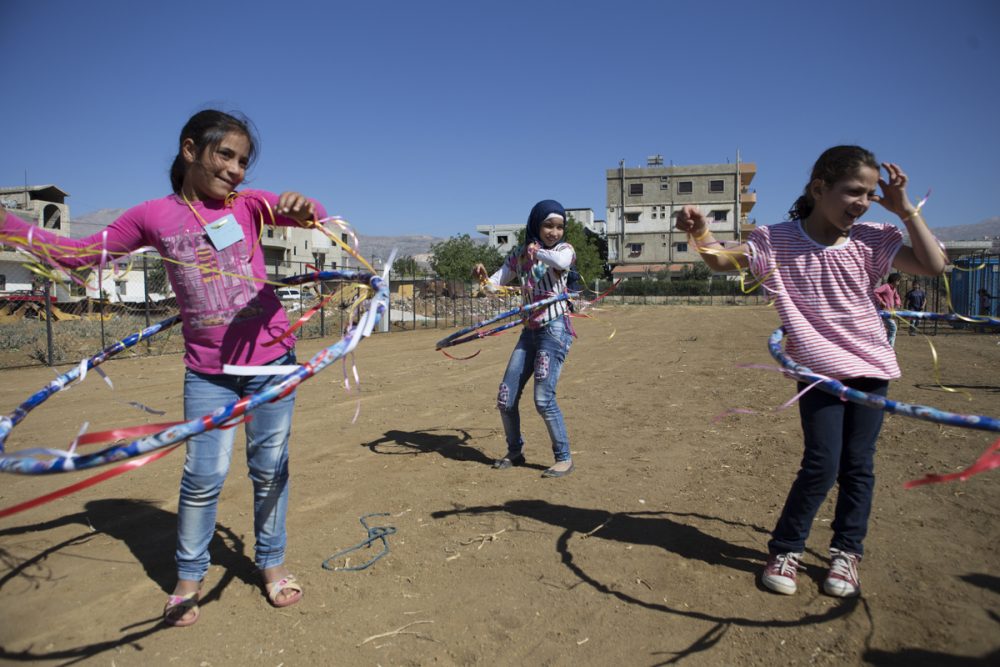 ILO organized a children's funfair on World Day against Child Labour in Lebanon's Bekaa valley, to raise awareness about the hazards of child labor in agriculture (Photo credit: ILO/Tabitha Ross)

The sun is rising over the Anti-Lebanon mountain range that borders Syria. Kowsa Ibrahim, a 12 year old refugee from Aleppo, is already at work pruning grape vines. She will work for the next several hours for 6,000 Lebanese Lira ($4), although she will not get that amount; an overseer, known as a “shawish,” will take 2,000 LL ($1.33) as a form of commission.

Kowsa prefers working the vines to collecting potatoes. “It’s better as there’s more shade. Potato work is out in the open fields under the sun, and it’s hard. I collect the potatoes in 20 kilogram sacks which I have to carry to the collection point,” she says.

Kowsa never had to do such back-breaking work in Aleppo, but for the past three years she has had to help support her family since fleeing Syria to Lebanon’s Bekaa valley. The war in Syria, now in its sixth year, has caused millions of refugees to flee their homes, putting significant strain on already stretched labor markets and services in neighboring countries.

“The number of working children has increased exponentially since the Syrian refugee crisis began. Because the country is struggling economically many families are relying on their children to contribute to their livelihood,” says Hayat Osseiran, a child labor consultant at the International Labor Organization (ILO).

In addition, international aid has been reduced. Last year, the World Food Program (WFP) was forced to cut its food voucher aid from $27 a month per refugee to just $13.50.

“It is a major problem, how can people live on that? But it is not only lowering the monetary amount, the targeted assistance program has been reducing the number of people it aids every year,” says Solange Matta Saade, Assistant Representative at the Food and Agricultural Organization (FAO) of the United Nations.

As a result of such cuts and the economic situation, refugee children are being forced to work as farm hands. But it is not just Syrian children working in the fields.

“We think only Syrians are being affected, but from 2009 to 2016, there has been an increase in the number of Lebanese child laborers,” says Carlos Bohorquez, a child protection specialist at UNICEF, referring to a study the agency carried out on child labor in the country. “There are three times more Lebanese (children) working than before, so the Lebanese are also being affected.”

Out of school, into the fields

There is a dearth of national data on child laborers, but an indication of the rise in their numbers can be gaged through school attendance.

“Last year there were around 10,000 Lebanese students that dropped out,” said Sonia Khoury, Director of the RACE project (Reaching All Children with Education) at the Ministry of Education and Higher Education (MEHE).

Among Syrian refugee children the numbers are even starker. Currently, out of the 482,034 school aged Syrian children, only 33 percent are enrolled in school. To bolster attendance among refugees, the MEHE’s RACE project implemented a second school shift in the afternoons to cater to the surge in students.

“Four months after starting the second shifts we lost 45,000 students,” says Khoury, attributing this to children being forced to work and the lack of affordable school transportation in the more rural areas. There is also a correlation between the picking season and school attendance.

However, the problem has moved beyond seasonal work. “Child labor in agriculture is classified as seasonal labor, but what we’re seeing now is that it is no longer the case as picking seasons vary, from potatoes to year-round greenhouses to picking flowers,” says the ILO’s Osseiran. 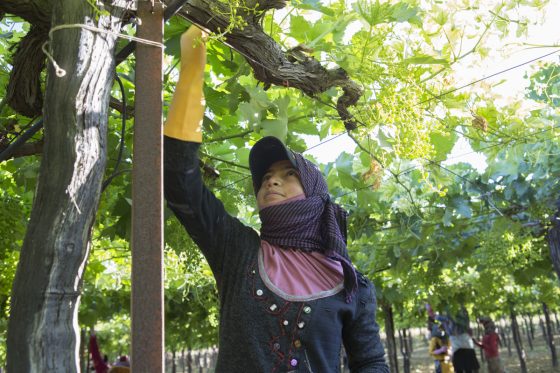 It is not only the workload that Kowsa finds tough. She says she has been frequently exposed to pesticides. “I get a rash from the pesticides. Sometimes I get flu or breathing difficulties too as we get no protection,” she says.

Such exposure can lead to pesticide poisoning and long-term health problems, explains Rana Barazi-Tabbara, a public health lecturer at the American University of Beirut.

“For children it is especially dangerous as there will be immediate health effects from pesticide toxicity, which at the most acute level can cause vomiting and even death. In the long term, pesticides affect nearly all the organs in the body, from the neurological to the reproductive system, and results in cancer,” she says.

Indeed, the ILO notes that agriculture is one of the three most dangerous sectors in terms of occupational safety and health, irrespective of the age of the worker, because – in addition to occupational diseases – it results in a high rate of work-related fatalities and non-fatal accidents, largely through use of motorized agricultural machinery.

To raise awareness of these dangers, the agency held a children’s funfair in the town of Saadnayel in the Bekaa, one of the areas with a high prevalence of child labor in agriculture.

“The fair was one of our ways to raise awareness, among both locals and refugees, on the very real dangers and risks children face when working in agriculture,” says Osseiran as the fair closes, which was held just ahead of World Day against Child Labor, marked globally on 12 June. “It also included artistic performances by working children and their parents, which provided them with a means to express some of the distress they feel due to their life of toil and hardship.”

Children have often been extra hands during harvesting time to pick olives and other cash crops in Lebanon. In fact, children as young as 10 are legally allowed to engage in family farming.

“Not all participation by children in agriculture is defined as child labor. It can be to acquire skills for the future, and is allowed as long as the children are not coming to harm, being abused, or their opportunity to get an education is denied,” says Faten Adada of the FAO’s Social Protection Focal Point.

Lebanon’s Decree No. 8987 of 2012 defines which forms of agricultural labor minors can engage in.

“It specifies which forms of hazardous work and which forms of agricultural work children should not be exposed to, which includes family farming. However, there is a loophole in the law that says that when a child is engaged in family farming they can work from the age of 10 onwards. We are working with General Security on closing this loophole,” says Nazha Shalita, Director of the Child Labor Unit at the Ministry of Labor. 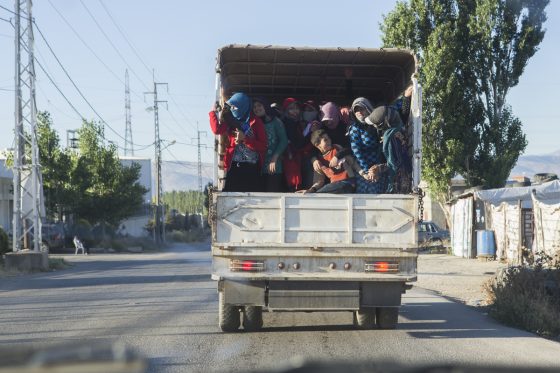 But with minimal enforcement of the Decree at the national level, children are openly working in the agricultural sector. “As children are working freely, and can be filmed doing so, it shows they are not worried about being caught,” says Adada.

An issue is that the inspection department at the Ministry of Labor has just 90 staff, while there are only around 45 inspectors to monitor labor practices nationwide. To Adada, such inspectors need to be bolstered not only in number but also at the technical training level to properly assess child labor practices, while they should be backed-up during inspections by the General Security. This is considered crucial to take on the shawish.

“We asked General Security to enforce the law, to have a reason to tell the shawish that it is not us (requiring no children to be employed) but the law. We need to show them the law is being enforced, and to get more inspectors for the ministry,” says Elie Massoud, Head of the Agriculture Department at the Chamber of Commerce, Industry and Agriculture in Beirut.

The shawish used to organize Syrian farm hands that came to Lebanon on a seasonal basis before the 2011 uprising. Once the Syrian conflict started, and the number of refugees rose to the government estimated 1.5 million today, the shawish moved into the informal refugee camps to capitalize on an abundance of cheap labor and their agriculture contacts.

“Those living in the agricultural camps pay no rent, and they are obliged to work for the shawish. If they don’t work, they have to leave,” says Riad Jaber, Co-Founder of civic organization Beyond, at the Fayda camps outside of Zahle. “There are 15,000 refugees there – it’s about 10 camps grouped together, and each group has its own shawish. If there are at least 100 women and children going from their camp, the shawish will be making about $200 a day,” he adds.

Unless greater action is taken by the authorities and public awareness around the issue improves, children will continue to be exploited and exposed to hazardous working conditions while missing out on crucial schooling years.

“There should be a concerted effort by the Lebanese government, supported by international donors, to eliminate child labor in agriculture, among refugees as well as Lebanese host communities. Unless it is addressed, it will contribute to a ‘lost generation’ in terms of education and human development,” says Frank Hagemann, Deputy Regional Director of the ILO Regional Office for Arab States.