No high-tech fix for our millennia-old garbage problem

Trash disposal will remain a cost for centuries to come

Here’s a question no one asks: What did Adam and Eve do with the apple core? Did they compost it or simply toss it into the nearest river or valley? Waste has been with humanity since the very beginning. And while we might survive in a post-apocalyptic future without coffee, the Kardashians or wearables, garbage will be right there with us (and cockroaches, most probably). The way we view garbage has changed in the past 50 years, and more recently the disruptive power of new technology is altering how we handle waste. But there will never be an app that can stop us from generating garbage.

OUR WASTE: YESTERDAY, TODAY AND FOREVER

For both a synopsis of how trash evolved from refuse to resource and a lesson in newspeak, consider a passage from the UN Environment Programme’s 2015 “Global Waste Management Outlook” report: “Many developed countries have made great strides in addressing waste management, particularly since the environment came onto the international agenda in the 1960s, and there are many good practice examples available for the international community to learn from. However, the initial focus was on waste after it had been discarded, whereas at present attention has moved upstream, addressing the problem at its source through, for example, designing out waste, preventing its generation, reducing both the quantities and the uses of hazardous substances, minimizing and reusing, and, where residuals do occur, keeping them concentrated and separate to preserve their intrinsic value for recycling and recovery and prevent them from contaminating other waste that still has economic value for recovery. The goal is to move the fundamental thinking away from ‘waste disposal’ to ‘waste management’ and from ‘waste’ to ‘resources’ – hence the updated terminology ‘waste and resource management’.”

Trash can, or treasure chest?

Waste is not worthless. But the business model that best turns trash to cash is service provision, not material recovery. Yes, your empty Pepsi can has value, but likely not as much as you think. In June, recyclers could sell a ton of aluminum on the local market for $400 to $500, Yvonne al-Hajj, who runs a for-profit recycling business, tells Executive. The price is particularly low at the moment (as are prices for all recovered commodities, she says), and can reach up to $800 or $900. The trick with aluminum cans, however, is that they’re light as feathers. Almost. While Executive does not have access to a scale precise enough to conduct an in-house experiment, the internet says an empty pop can weighs 14.9 grams. That means you need slightly over 67,114 cans to cash in a metric ton. For a household hoping to recover a bit of their soda purchases, it would have to either be very, very thirsty or committed to long-term can storage. In one year, it would require emptying around 183 cans per day to reach a ton (not to mention that, at the current market price, the cost to buy a ton of full cans is $33,557). For a household that drinks five cans per day, it would take nearly 37 years to amass a ton. Volume is key, and the same is true of other valuable recyclables like paper, cardboard and various types of plastics.

Hajj is the brain behind Zero Waste Act, a commercial enterprise run under Contra International, a local company involved in the waste and construction sectors. Zero Waste collects and sells recyclables from schools, business (including ABC malls) and individual households. Although it’s been up and running since 2011, Hajj admits the company is “so far not that profitable.” In May of last year, before the government closed the Naameh landfill with no alternative in place, Zero Waste began charging households a monthly collection fee to help cover its own operations costs, Hajj explains. The fee starts at $10 per month and varies depending on collection frequency. Zero Waste had more than 800 members prior to imposing the fee, and has “over 600” today, Hajj says. The company opted for a fee in part, she explains, because picking up small volumes of plastic, aluminum and other materials from individual residences can cost more than what the recyclables are worth.

Both locally and abroad, collecting recyclables is typically a non-profit business unless it is part of the informal market (think a few individuals sifting through unsorted waste in large containers for valuables or driving around to source old refrigerators). As individual collectors try to scale their enterprises, overheads (employees, vehicles, compressing equipment) quickly eat away profits. Not to mention, as Hajj notes, that collected recyclables often need further, non-automated sorting and treatment (caps removed from water bottles, plastics and metals divided into their various types).

Companies making real profit from garbage are the ones removing and disposing of big volumes (regardless of whether treatment technology is state-of-the-art or last century, garbage doesn’t disappear from our doorsteps for free). Waste Management, the creatively named service provider which is the largest trash handler in the US, reported revenues of $13 billion in 2015 (down from $14 billion the year before). Ziad Abi Chaker – founder of Cedar Environmental, which builds waste management facilities locally – explains, “The garbage business is just an industry,” adding: “Waste management costs money for the government that is running [the service]. The one who makes money is the one dealing with the problem because the infrastructure is very expensive. People ask me, ‘Why do you have to collect money from municipalities [to send their waste to your facilities]?’ Because that’s the only way it will be profitable.” Cleaning up after ourselves seems to be a cost humanity will always have to bear.

The sanitary landfill was an innovation of the 20th century. It was born from the realization that trash left alone to rot in a pile damaged the surrounding environment and posed a public health risk. While this most basic of waste management technologies is still not used worldwide, the pace of innovation in the field of waste disposal is nonetheless in constant mode of development. Waste can be burned in a controlled environment to produce energy. It can be transformed into refuse-derived fuel – a cheap energy source for some industries, like cement manufacturing. Waste can be recycled and up-cycled. There are even smart waste bins (large containers with sensors and an internet connection which alert waste collection companies when a bin is full, optimizing the design of pick-up routes and schedules). A brief Google search reveals that self-sorting trash cans are popular inventions among university students (and Executive met two from Lebanon – Jamil Ballout and Gabriel al-Hakim), yet for individual households no such product is commercially available. 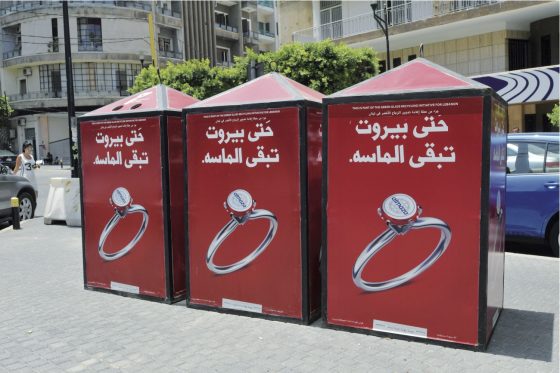 Lebanon’s entrepreneurs are not ignorant of waste management, but the handful Executive spoke with this month are all pursuing ventures too young to properly evaluate (most only thought of their potential companies as the result of startup competitions with a garbage focus held earlier this year). A new “green” fund, however, recently entered the market with a goal of financing only environmentally friendly startups, pumping more capital for social entrepreneurship into the ecosystem and bringing with it the associated competition for said capital. The fund comes from Foundation Diane, an NGO started by Diana Fadel. Cyril Rollinde, the fund’s manager, and Tracy El Achkar, of the foundation, explain to Executive that waste management will be one area of investment focus. While Rollinde won’t reveal the size of the fund, he explains that it won’t behave like other venture capitalist war chests on the market.

“We want to be liquid,” Rollinde says, noting the fund will exit all investments within five years and does not plan follow-on funding. It is eyeing ticket sizes between $50,000 and $300,000, but Rollinde says there is “no real limit.” The fund does not want to lose money, but is not looking for astronomical returns. Instead, Rollinde and Achkar confirm, the idea is pushing a green agenda into the entrepreneurship ecosystem with an end goal of making the green industry “as competitive as the tech industry.”

Clearing up the mess

Pushing for a little more equality